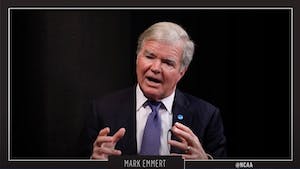 NCAA Board of Governors chair Jack DeGioia and president Mark Emmert updated NCAA members Friday on the work of the Constitution Committee and the additional steps that will be required as the association continues its efforts to transform its governance.

The vote on a new constitution at the 2022 Convention in Indianapolis in January is the first step in the process. A new constitution will provide divisions the flexibility they need to act on the second step, which will require that each division review the rules governing the division to ensure that changes are consistent with the principles agreed upon in the new constitution. The work of rewriting rules for each division must be completed by August 2022, in time for the start of the new academic year.The second step will be the responsibility of the governance structures of each division. The Division I Board of Directors will oversee the rewriting of the rules governing Division I, and the Division II Presidents Council and the Division III Presidents Council will each have the responsibility for their respective divisions.

The Constitution Committee has been meeting since Aug. 17 and has engaged closely with the membership during this time. A survey was sent to the membership in mid-August and the feedback received is informing the deliberations of the committee.

Following the Special Convention, the committee will revise concepts and provide another opportunity for membership feedback. It will complete its work by submitting final recommendations to the Board of Governors by Dec. 15. Following the presentation of this new constitution, members will have opportunities to submit additional changes following current Association rules. This culminates in membership votes on the new constitution at the 2022 Convention in Indianapolis in January.

"As the committee began its work, it became clear that there was more to be done outside of their charge to implement the transformational changes that are needed to improve the Association. This realization can be outlined in a two-step process. The ratification of a new constitution in January is the essential first step in the process of transforming the governance of the NCAA. A new constitution will provide divisions the flexibility they need to act on the second step, which will require that each division review the rules governing the division to ensure that changes are consistent with the principles agreed upon in the new constitution," DeGioia and Emmert wrote.

To read DeGioia and Emmert's message in its entirety, click here. For more on the Constitution Committee, click here.

Emmert was also the guest on this week's NCAA Social Series where he discussed the Constitution Committee's work plus the NCAA's gender equity review process and name, image and likeness topics. Watch the episode below or listen on Spotify, Apple Podcasts or SoundCloud.