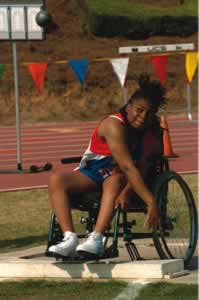 Bev Vaughn, president of the American Association of adaptedSportsTM Programs, made her pitch in the summer of 2005. In front of a gathering of high school athletics administrators in San Antonio, Texas, at the National Federation of State High School Associations' summer confab, she asked them to consider providing more opportunities for students with physical disabilities.

Dan Washburn, executive director of the Alabama High School Athletic Association, was in attendance that day, and what Vaughn said made a lot of sense to him. In fact, Washburn was so motivated that Alabama recently became the second state in the country (behind Georgia) to partner with AAASP and lay the groundwork to develop athletic programs specifically for physically challenged students. "There are kids out there who can't participate, and it would mean so much to them if they could," Washburn says. "We don't discriminate against race or gender, and we certainly don't want to discriminate against someone who's handicapped."

Although the partnership was finalized in July, specific programs probably won't begin until the 2008 school year, by which time Washburn expects to raise the estimated $300,000 needed to operate wheelchair basketball and wheelchair track. The AHSAA plans to petition the private sector and the state Legislature to help secure that funding.

Vaughn is surprised other state high school associations have been slow to catch on to the message AAASP has promoted for the past decade. "Our main objective is to ensure that any student in grades one through 12 with a physical disability or visual impairment has an opportunity to participate in interscholastic sports - whether that's working through our model or something like Minnesota has done," Vaughn says, referring to the state where disabled student-athletes have competed for state titles in soccer, floor hockey, bowling and softball independent of AAASP since 1993. "We believe this can work in other states."

AAASP's model, which so far has been used to create state-sanctioned wheelchair track and wheelchair basketball tournaments in Georgia, involves teams consisting of participants with a variety of physical disabilities from schools in several different communities. The teams compete against each other in five wheelchair-based sports (basketball, indoor soccer, football, track and field, and hockey), as well as beep baseball for blind students. "Once everybody learns the rules and sees a particular sport being played, they say, 'OK, this makes total sense,'" Vaughn says.

More often than not, it's the athletics administrators who need a push to get such programs started. "Some of our states, because they're not being challenged directly right now, are not messing with this issue. It's not a top priority," says Tim Flannery, an assistant director at the National Federation of State High School Associations, adding that such organizations as local Boys & Girls Clubs and YMCAs in some communities are stepping in to serve the athletic and recreational needs of students with physical challenges. "But rest assured, when athletic administrators feel pressure to deal with this issue, they're going to start looking for available options."

Those options include either creating a small network of wheelchair teams with players culled from several area schools or incorporating students with physical challenges into existing teams of able-bodied participants. In states where an athlete has asked to compete with able-bodied peers, administrators usually evaluate whether the accommodation would create an unfair advantage for the participant or pose a potential safety risk to the participant or other competitors.

Such an awkward scenario played out earlier this year when Tatyana McFadden, a wheelchair track athlete for Atholton High School in Columbia, Md., won her preliminary injunction against Howard County Schools to compete in Maryland's 2A 1,600-meter championship but was disqualified after she allegedly used her chair to pace a teammate (see "Rolling Stop," July, p. 32). "It's a real difficult situation, because on one hand we want these kids to participate, and on the other we want to be fair to other competitors," Flannery says. "We're all about participation, but the fact is that there are kids who need accommodations that sometimes stretch our existing rules."

Nevertheless, Vaughn says the McFadden case should serve as a wake-up call to high school athletics administrators who've yet to encounter an accessibility issue. "The level of awareness is going to go up among parents, teachers and school administrators," she says. "And I think demand for these types of programs will increase."

The demand for such programs in Alabama remains to be seen. But Washburn's confident his association did the right thing. "It's a proactive move on our part," he says. "If there's no one out there to form a team, we won't have a team. But we want to make sure that if there is a need, we can fill it."