In the wake of a tragic death, a private beach club survives a claim of vicarious liability. 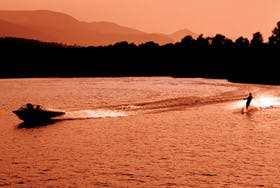