An assistant high school girls' basketball coach should not have been overlooked for the varsity job, an arbitrator rules.

Look for this Sports Law article in the July issue of Athletic Business. Sign up for E-News to receive a special preview of Sports Law delivered to your inbox each month. 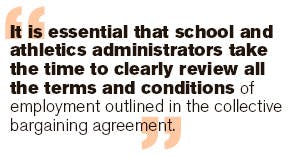 Agrowing number of school administrators, both at the college and high school levels, have begun to insert mandatory arbitration clauses into collective bargaining agreements or employment contracts. While there are many benefits to including such a clause in these documents, one of the most important is that it provides both parties with an alternative dispute resolution procedure that allows them to avoid the overcrowded court system. As a result, issues can be handled relatively quickly and confidentially, which cuts down on legal expenses and unwanted negative publicity.

Even when arbitration is used, however, some collective bargaining agreements allow the parties to go to court to challenge the arbitrator's award. A good example of how the arbitration process works, and the role of the courts in reviewing an arbitration award, is Eastwood Local School District Board of Education v. Eastwood Education Association [875 N.E.2d 139 (2007)].

The girls' varsity basketball program at Eastwood High School is considered one of Ohio's best. Over 17 years, the team amassed 299 wins while playing under head coach Jim Gracyk - who, while an outstanding basketball coach, did not hold a teaching certificate.

In 2005, Mitchell Freeman, a teacher at Eastwood Middle School and an assistant varsity coach and head coach of the girls' junior varsity team, applied for Gracyk's position (coaching positions are contracted for one year). Upon receiving Freeman's application, Eastwood's athletic director assembled an advisory group of four former coaches and players to interview Freeman and make a recommendation. Their consensus was that he was not qualified to be Eastwood's girls' varsity head coach. Based on this recommendation, the Eastwood Board of Education denied Freeman's application and rehired Gracyk for another year. Denied the Eastwood position, Freeman took the girls' varsity head coaching job at Old Fort High School.

Freeman and his union representative, the Eastwood Education Association, then filed a grievance challenging the board's decision to rehire Gracyk. Freeman claimed that under the collective bargaining agreement between the school district and teachers' union, certificated teachers were entitled to be awarded any supplemental coaching contract over a non-teacher. Therefore, Freeman argued, the only question was whether he, as a certificated teacher, was qualified to be a head coach, not whether he met some higher standard as Eastwood's head coach.

Following a hearing on Oct. 25, 2005, an arbitrator issued an opinion in favor of Freeman and the union, asserting that Freeman was qualified to be a girls' varsity basketball head coach, and that while the collective bargaining agreement did not specifically address the manner in which the board selected a coach, the agreement did mandate hiring a bargaining unit employee before considering a non-employee for any supplemental coaching position. The arbitrator also relied on an Ohio statute stating that a non-licensed individual who holds a valid pupil-activity program permit may be employed only after a school district's board of education offers the position to qualified, licensed employees of the district, and none accept it.

As a result, the arbitrator ordered the Eastwood Board of Education to pay Freeman the difference between the compensation he would have earned as Eastwood's head coach over that which he received as head coach at Old Fort High School.

As permitted under the collective bargaining agreement, the board went to court seeking to vacate the arbitrator's award. After reviewing the case, the Wood County Court of Common Pleas agreed with the Eastwood Board of Education, and vacated the award. The court concluded that the arbitrator impermissibly exceeded his authority when he relied on extraneous statutory requirements not included in the collective bargaining agreement.

The school board appealed to the Court of Appeals of Ohio, Sixth Appellate District, which noted that the Ohio Legislature and the Supreme Court of Ohio have placed stringent restrictions on the circumstances under which a court may vacate an arbitrator's award. In particular, the court ruled that the arbitrator is the final judge of both law and facts and that, under Ohio law, a court may only vacate an arbitration award upon a clear showing of fraud, misconduct or some other irregularity that renders the award unjust, inequitable or unconscionable. Even a grossly erroneous decision is binding in most cases.

The Eastwood Board of Education, as it did before the Wood County Court of Common Pleas, argued that the arbitrator exceeded his authority by adding to the collective bargaining agreement - a violation of a provision stating that "the Arbitrator shall have no power to alter, add to, or subtract from the terms of the Agreement." In support of its argument, the board pointed to the arbitrator's opinion, which found that the contract between the parties contains no provision governing the selection of coaches or other supplementary employees. The preference for certificated employees in these positions, the board insisted, comes only from the statute and is, therefore, an addition to the negotiated terms of the agreement.

The Court of Appeals, in reinstating the arbitrator's award, found the board's argument unpersuasive, holding that the parties to a contract are, except where a contrary intent is evident, deemed to have contracted with reference to existing law. In other words, the laws existing at the time the contract is entered into form a part of the contract as fully as if they were expressly incorporated into the contract. In addition, the court noted that the collective bargaining agreement itself, in its severability provision, expressly makes the agreement subject to existing laws. Therefore, the appeals court ruled, the trial court erred when it concluded that the agreement did not incorporate the provisions of the law, and that the arbitrator did not exceed his authority by adding to the collective bargaining agreement.

The Eastwood case provides education and sport administrators an illustration of the value of mandatory arbitration clauses, which are fast becoming a common element of most collective bargaining agreements. As the Ohio Court of Appeals decision illustrates, state legislatures and courts have placed stringent restrictions on the circumstances wherein a court may vacate an arbitrator's award. Most disputes are thus handled quickly and confidentially, avoiding unwanted publicity.

Given how difficult it is to get a court to vacate an arbitrator's award, it is essential that school and athletics administrators take the time to clearly review all the terms and conditions of employment outlined in the collective bargaining agreement. If administrators fail to properly review the terms during the collective bargaining process, they will unlikely be able to challenge them in the courts.

Attorney John T. Wolohan (jwolohan@ithaca.edu) is a professor of sports law and chair of the Sport Management & Media department at Ithaca College.
Sign Up for AB Today!
Get industry news, insights, and new product information delivered straight to your inbox.
Read Next