In May 2009, Tommy Mallon was playing in his final high school lacrosse game for Santa Fe Christian in Solana Beach, Calif., when he collided with an opposing player as both were scrambling for a bouncing ball. 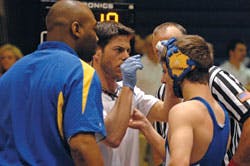 In May 2009, Tommy Mallon was playing in his final high school lacrosse game for Santa Fe Christian in Solana Beach, Calif., when he collided with an opposing player as both were scrambling for a bouncing ball. The hit initially appeared innocuous, yet Mallon felt a slight numbness in the back of his head. While his impulse was to get up and return to the game, Riki Kirchhoff, an onsite certified athletic trainer, refused to let him. Instead, she placed Mallon on a spineboard and had him transported by ambulance to a nearby trauma center.

There, doctors discovered that Mallon's neck was fractured and that one of his vertebral arteries had been dissected, allowing blood to leak out of the artery and form a dangerous clot. "If he had gotten up and turned his head, he could very well have dropped dead right on the spot," says Mike West, president of the California Athletic Trainers' Association. "Athletic trainers save lives; it's as simple as that."

Mallon, who underwent months of treatment and therapy, will never play contact sports again. But because a certified athletic trainer saved his life, Mallon and his mother, Beth, have dedicated themselves to ensuring that every high school in the United States has access to a certified athletic trainer through Advocates for Injured Athletes. The organization's San Diego-based location is noteworthy because California is one of three states that do not even regulate the athletic training profession. (Alaska and Hawaii are the others.)

Nowhere is regulation of the profession more crucial than at the high school level. As the trend toward single-sport specialization continues, there have been increasing reports of serious injuries and physical complications in student-athletes arising from overuse and overtraining. A recent increase in catastrophic injuries and fatalities also reiterates the need for regulation of the athletic training industry, according to the CATA. In California alone, at least 36 high school student-athletes have died from sports-related injuries in the past three years, the association says.

"The last thing you want to do is get somebody in there who is doing something outside their scope of practice," says Bob Colgate, an assistant director of the National Federation of State High School Associations, who also oversees that organization's Sports Medicine Advisory Committee.

Nationally, the practice of legislating oversight of athletic trainers dates back to 1971, when Texas became the first state to do so. By 2001, all but a handful of states had adopted laws ensuring that athletic trainers have passed the National Athletic Trainers' Association's Board of Certification exam, earned licensure or obtained some other form of registration before practicing in a given state.

Only two in five high schools benefit from the full- or part-time services of a certified athletic trainer in California, where a shortage of them exists. West says the remaining 60 percent either use other health professionals, such as physical therapists and chiropractors, or nobody. Adding insult to injury, former California governor Arnold Schwarzenegger vetoed three separate bills that would have established certification parameters.

"Frankly, it is a mystery to everyone why Schwarzenegger was opposed to this legislation," says Judy Pulice, NATA's national manager of state legislative and regulatory affairs. "The only thing we can think of is that he didn't understand it. He wrote the same veto message for two entirely different bills. Our speculation is that he had it confused with personal trainers and thought it was unnecessary regulation of personal trainers."

West contends that Gov. Jerry Brown will "be a little more open" to the Athletic Trainers Practice Act, also known as AB 374, simply because of the Democrat's politics.

The bill would mandate that all athletic trainers must:

The bill also would specify that a license expires in three years and is subject to renewal upon payment of a renewal fee and the completion of 75 hours of continuing education in order to keep current the individual's knowledge and skills.

The legislation, introduced in February by Assembly member Mary Hayashi (who also introduced ill-fated concussion legislation last year), was approved by the California Assembly. But California senators turned it into a two-year bill and are requiring that CATA and other proponents provide responses to a set of 50 questions demonstrating, among other things, the likelihood of harm were the act not made law. "They've already said, 'Your one argument can't be that 47 other states have done it,' " West says, adding that Mallon's story will be among the evidence provided. "We're not trying to legislate people out of jobs. We're trying to make sure that if you're a certified athletic trainer, and you've gone through all the training and certification, you're the only one who can call yourself that. People need to understand what that means and the competence that comes with it."

Similar regulatory bills introduced in Alaska and Hawaii earlier this year were not passed for various reasons, most having nothing to do with the merits of the legislation, Pulice says. "Hawaii's will be brought up again in January, and we fully expect that bill to pass next year," she predicts. "And we have really high hopes for licensure in Alaska, too."

If Pulice is correct, that could leave California - a progressive state in so many other ways - alone on the issue of athletic trainer regulation. What if the current proposal fails?

"We'll come back and do it again," West says. "It means too much to us. Ultimately, this is for the protection of the public in California. We will not give up. We will continue to find ways to - if not make full-on progress in one fell swoop - make incremental progress toward the ultimate goal. Are we frustrated? Of course we are. But that doesn't mean that the ultimate prize is not worth the effort."