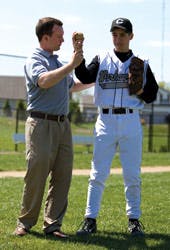 Athletic departments and booster clubs will have the ability to better protect student-athletes beginning this fall, thanks to a pair of new checklists schools can use to monitor their injury prevention and care efforts.

The National Athletic Trainers Association recently unveiled 11 strategies for avoiding and treating injuries and illnesses among secondary-school-aged kids in both practices and competitions. To underscore its commitment to the cause, NATA officials simultaneously announced a partnership with the North American Booster Club Association, and together the organizations introduced a 10-point sports safety checklist to help parents, coaches, athletic directors and certified athletic trainers ensure safe and healthy environments. Both sets of guidelines were presented in June at the NATA's annual meeting in St. Louis.

"We have a really wide range of care that's being provided to high school athletes across the United States, from some private schools that have a physician on staff all the way down to a large number of schools that have no medical personnel at all - no school nurse, no certified athletic trainer, nothing," says Dawn Comstock, an assistant professor at Ohio State University's College of Medicine. "These are big steps forward to make sure that everybody is on the same page about some relatively simple things that can be done to help keep kids safe." 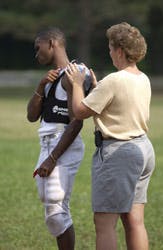 Although many of NATA's 11 peer-reviewed guidelines - such as using preseason physicals to determine an individual's readiness to participate and providing equipment that fits properly - may seem like commonsense measures, they also serve as friendly reminders. "While some people will look at some of these points and say, 'Well, that's a no-brainer,' it's the complete package that we feel is so important," says Jon Almquist, athletic training program administrator for Fairfax County (Va.) Public Schools and lead author of the guidelines. "I would hope this document serves as a way for a school to evaluate its own policies and procedures, and helps set up a game plan to make improvements."

"Something as simple as having an emergency action plan is not always done, especially in community and church youth settings," Almquist says. "What happens when somebody gets hurt? Because time can be of the essence, it's important to have things planned out."

From a risk-management perspective, the guidelines can be particularly helpful to schools with overworked ADs and underfunded athletic departments. Almquist, who stresses that having a certified athletic trainer on staff is not a prerequisite for change, suggests focusing on one or two strategies deemed to be the most important, and then making the necessary adjustments. "So if something bad were to happen in the interim, at least the school system and a defense attorney could say, 'We have been working on it, and here is the progress we've made,' " he says. "It won't eliminate the liability, but it may very well reduce it - especially in the eyes of a jury."

Here is where booster clubs can help. After all, asks NABCA president and chief executive officer Steve Beden, if boosters can raise money to offset expenses in other areas of a school's athletic department, why can't they take the initiative in securing money to pay for at least the part-time services of a certified athletic trainer?

"Anything that can help kids be safer, healthier and perform better gets the attention of parents," Beden says. Once boosters have a vested interest in safety issues, he adds, they'll also be more apt to notice small risk factors that ADs or coaches might overlook - such as excess water on the sidelines that could lead to slips and sprains.

NABCA's 10-point sports safety checklist, like NATA's 11 guidelines, is based on commonsense procedures - including mandating that all athletes carry their own water bottles and stay well hydrated during practices and games; ensuring coaches, parents and officials be trained in first aid, CPR and the use of an AED; and performing regular facility-safety checks. These are things that coaches and administrators know," says Beden, who plans to promote the checklist in newsletters and flyers, at regional workshops and via the association's web site. "But those people might need to be pushed a little bit."

At this point, no one should need pushing to realize how prevalent sports injuries are among high school student-athletes. For the past three years, OSU's Comstock has been tracking injury data from practices and games in nine sports at 100 schools across the country as part of the university's high school sports injury surveillance study. On average, the study documents approximately 4,500 total injuries per year at those schools. The most frequent are sprains and strains, while fractures and concussions each account for about 10 percent of all reported injuries, according to Comstock, who extrapolates those numbers to come up with a national estimate. That means student-athletes during the academic years 2005-06 and 2006-07 sustained an estimated 2.9 million injuries in all sports covered by the study (baseball, boys' and girls' basketball, football, boys' and girls' soccer, softball, volleyball and wrestling). Data from the 2007-08 school year was not available as of this writing.

"People say kids will get hurt playing sports, that it's inherent. But sports-related injuries don't have to be part of the game. They're not the price you have to pay to play," Comstock says, citing reductions in occupational injuries because of improved personal-protective equipment as proof that the same approach can work in high school sports. "Even though the general public has the perception that sports injuries are largely unpreventable, we know they can be prevented."