UPDATE: In September 2014, the Coachella Valley School District board of trustees approved a decision to change the team name to "Mighty Arabs" and adopt a new logo.

When it comes to nickname and mascot controversy, typically Native Americans and teams like the Indians and Redskins come to mind. But a Southern California high school's longstanding Arab mascot is at the center of its own controversy. 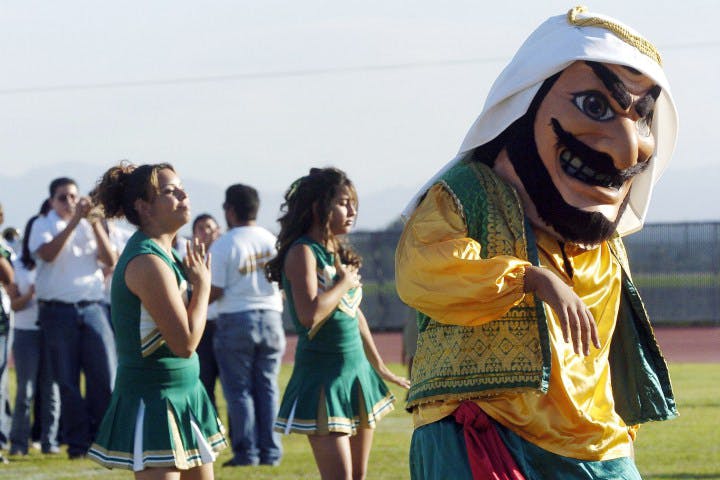 The Coachella Valley High School Arabs have held their name since the 1920s. According to the Associated Press, the name "was chosen to recognize the area's reliance on date farming, traditionally a Middle Eastern crop."

The mascot, which at one point was a turban-wearing horseman, has evolved over the years and is now a standing figure wearing robes and a headscarf.

Calls for a change of the nickname originally came from the American-Arab Anti-Discrimination Committee. In an open letter, the group said the Arab nickname "perpetuates demeaning stereotypes" and "cannot be tolerated."

The letter also raised concerns about "a female dressed as a belly dancer [who] entertains the mascot by dancing for him" at halftime of sporting events.

Now the Coachella Valley Unified School Board is feeling the heat. The board originally planned to discuss the issue at its regularly scheduled meeting on Nov. 21, but instead will hold a special meeting Friday.

"A mascot chosen to show reverence and honor for the customs of prideful Middle Eastern peoples throughout our region now provokes negative feelings, and this must be addressed," school superintendent Darryl Adams told The Desert Sun in a letter.

According to NPR, the district has a student body that is 99 percent latino.

"It's not so much the name but the depiction of the mascot," Adams told CNN. "I'm from Memphis, Tennessee, so I understand how people can look at different symbols and caricatures. I look at it as an educational opportunity for our students and staff to discuss it. Things evolve over time, and it's the 21st Century and it's 2013, and this group feels we need to look at it and we will."