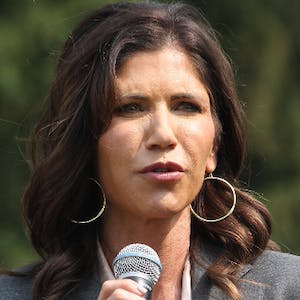 Noem filed the paperwork Tuesday afternoon to codify two executive orders she wrote earlier this year that she believes protect women and girls, one at the K-12 level and one at the collegiate level, the Sioux Falls Argus Leader reported.

The first order instructed the South Dakota Department of Education that it "shall" establish a K-12 policy consistent with the idea that "only females, based on their biological sex" as listed on their birth certificates should participate.

Similar language is in the second order on college athletics — participation is based on the sex listed on one's birth certificate. The order also states the Board of Regents "should" take "any and all steps necessary" to legally implement policies consistent with that idea.

The legislation defines sex as the sex assigned at birth, not as one’s lived gender.

But this bill is a solution in search of a problem, according to the ACLU of South Dakota in a news release opposing the bill. The organization called it an attack on transgender women and girls.

The draft legislation also violates both the U.S. Constitution and Title IX of the Civil Rights Act, the ACLU said, which protects all students including trans students from discrimination based on sex.

"Gov. Noem’s proposed legislation is clearly fueled by a fear and misunderstanding of transgender people in our state,” Jett Jonelis, ACLU of South Dakota advocacy manager, said. “Gov. Noem says she wants to ‘promote fairness in women’s sports,’ but if that were true, she’d tackle the actual threats to women’s sports such as severe underfunding, lack of media coverage, sexist ideologies that suggest that women and girls are weak, and pay equity for coaches."

The bill as it's written also states that if an athlete suffers direct or indirect harm as a result of a violation of the bill, the athlete has a private cause of action for injunctive relief and any other equitable relief available under law against the school, athletic organization or college that caused the harm, and vice versa for schools or colleges.

Any civil action under the bill must be initiated within two years from the date the alleged harm occurred.

The legislation doesn’t have the “problematic provisions” included in last year’s HB 1217, a news release from Noem’s office states, for which Noem issued a style-and-form veto and instead issued executive orders for.

Every young woman deserves an equal playing field where she can achieve success. That's why only girls should be competing in girls’ sports.

“Those flawed provisions would have led to litigation for our state, as well as for the families of young South Dakota athletes — male and female alike,” Noem said in a statement.

HB 1217 passed the Senate and House after being smoked out on the House floor. Noem had tweeted on International Women’s Day that she was excited to sign the bill into law, but later issued her veto.

"Trans lives in South Dakota are not up for debate," Equality South Dakota shared on Twitter. "Trans girls are girls. Trans women are women. Period."

2021's HB 1217 isn't the first time lawmakers in South Dakota have grappled with the notion of governing who can compete in which sporting leagues and activities. Six similar bills have failed between 2015-2019.