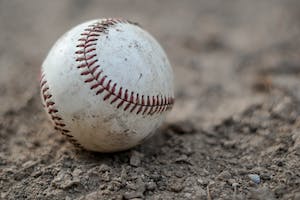 A youth baseball coach in Texas assaulted an umpire after being ejected and has since been banned from the league.

The Abilene baseball coach was not named but can be seen in a video obtained by local ABC affiliate being ejected by the umpire. The coach then shoves the umpire, knocking him to the ground.

The incident happened during a tournament hosted by 24 Sports at The Colony.

"The umpire proceeded to remove the coach from the game because he started to show a little bit of aggression," L'Erin Hampton, of 24 Sports, told WFAA. "It's pretty protocol if we ever get a heated coach, we have to remove them from the game. So once that umpire decided, 'Hey, you have to leave,' that's when he was assaulted by the coach."

The coach has been banned from all 24 Sports events, but the kids on the team are always welcome back.

"The team, itself, does have to disband if they continue to participate in baseball tournaments with us. That again, is also protocol as well, too. But the coach has, you know, he's been in good spirits," Hampton told WFAA. "We've talked with him. He's very supportive and remorseful for what happened. You know, we support him, you know, in his path to getting better and he knows that this is not the ideal situation to be in, but he's taken full accountability."

Hampton said this isn't the first time a coach has attacked an umpire, citing other attacks in other markets.

"We have to be better," Hampton said. "I think at the end of it, we have to remember that the kids come first. Right? So it goes back to 'why you do what you do? What's your why? Why do you coach? Why do you want to send your kids to play baseball?'"