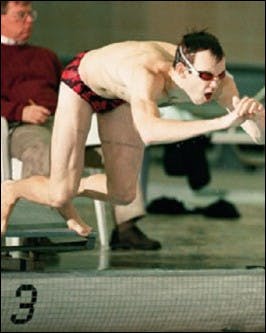 Ken Lemaster's job just got a lot more difficult. The aquatic director at Eisenhower Pool, an indoor and outdoor facility operated by the Springfield (Ill.) Park District that hosts about 20 high school swim meets annually, faces the first major renovation decision in the pool's 37-year history - a decision that's likely to come with at least a five-figure price tag.

The facility's 3 1/2-foot-deep competition pool must be brought into compliance with a recent safety-related ruling by the National Federation of State High School Associations that eliminates the option of using 18inch starting platforms in pools less than 4 feet deep. The previous depth requirement was 3 1/2 feet.

The action - effective last November and now reaffirmed for the 2002-03 swimming seasons - hits older pools around the country hard. Early estimates from the NFHS indicate that the ruling could affect as many as 20 percent of its member schools, forcing operators of shallower pools to consider such alternatives as raising gutters or lowering floors - "major pool surgeries," in the words of Ken Ward, a principal at Water Technology Inc., an aquatics consulting firm in Beaver Dam, Wis.

Indeed, Lemaster - who doesn't necessarily disagree with the National Federation's ruling - has already received a quote of more than $19,000 to raise Eisenhower Pool's gutter by 6 inches, a logical solution because the gutter is currently located 12 inches below the deck. But that would precipitate the need to replace starting platforms, which would be 6 inches too short for competition because of the higher gutter. Lemaster also has the option of equipping Eisenhower's separate competition pool and diving well, which currently operate on the same filtration system, with individual filtration systems.

The price is steeper for lowering a pool's bottom, a task that likely would involve reworking at least one-third of the pool's surface and take a great deal of time, Ward says. Conservative cost estimates for this kind of project run from $80 to $120 per square foot, he adds. "And after you're done, you have essentially just rebuilt a decades-old pool. At a certain point, you're going to be better off considering alternatives."

Those alternatives include starting swimmers off the deck or in the water, or moving platforms to a deeper end of the pool - options offered by the National Federation that aren't very appealing to some facility operators. "The worst starts I've ever seen were this past year," Lemaster says. Athletic administrators at schools that use Eisenhower's competition pool opted to start swimmers from the deck. "The starting we saw was clumsy and much more dangerous than starting from our 18-inch blocks."

"We know this will impact pools; we just don't know how many," says Cynthia Doyle, an assistant director of the NFHS and liaison to the federation's Swimming and Diving Rules Committee, which mandated the depth change. "We're certainly not trying to reduce participation in swimming, but we want to minimize the risks involved."

Minimizing risks may also create some unintended consequences - ranging from shutting down pools to shutting down programs. Consider the situation at Stoughton (Wis.) High School. Rather than modify his school's 27-year-old pool, athletic director Rich Reitzner has decided to move all upcoming home swim meets to alternate venues. For the time being, Stoughton swimmers will only use the 3 1/2 -foot-deep pool, which slopes width-wise to a 12-foot depth, for training and practices. "We discussed having swimmers start off the deck or in the water, but it's just not fair to the kids," he says. "These kids are trying to better their times and improve their seedings for other events. If we can't do something right, we're not going to do it. This ruling could hurt our program in the long run if we don't get some renovation or expansion going within the next year."

"There are a lot of cost issues involved in this requirement," Lemaster adds. "I'm afraid some schools are just going to cut their programs."

Complicating matters for Lemaster is the fact that Springfield Public School District 186 recently severed its contract with Eisenhower Pool after budget problems forced officials to drop competitive swimming and diving, as well as aquatic physical education classes. The possibility exists that the competitive program could be reinstated, Lemaster says, but he's not sure if that will happen. Meanwhile, swimmers at Sacred Heart-Griffin High School still plan to compete at the facility, requiring the park district to take some sort of action. Unfortunately, increasing the depth by 6 inches would affect how Eisenhower swimming instructors teach lessons to youngsters who may not be advanced enough to learn in 4 feet of water.

"I am fairly confident that if we still had the contract with our schools, it would be an easier sell to the Park Board to rehab our pool," Lemaster says. "It's going to be a lot harder now, but it's still a good idea to go to 4 feet."

It's a better idea to go even deeper, Ward says. "Athletic directors have a reason to be upset, because their pools may be shut down," he says. "But most of them are running unsafe pool operations. I've never liked placing starting platforms over water less than 6 feet deep. The 4-foot ruling will help, but I don't think it broaches the problem. Sooner or later, you're going to have that kid who thinks he knows how to dive, but really doesn't. If a kid is going to hurt himself in 3 1 / 2 feet of water, he's going to hurt himself in 4 feet."

It should be noted that other national organizations like USA Swimming and the NCAA don't agree with Ward. For competitive swimming, both groups allow a minimum starting depth of 4 feet off platforms as high as 30 inches. (Most states' noncompetitive safety standards don't allow diving from the deck in depths of 5 feet or shallower.)

In fact, the NFHS Swimming and Diving Rules Committee did consider changing the minimum diving depth to 5 feet at its April meeting, but in the end settled on 4 feet. "The rules committee is very concerned about the potential for injuries in pools with water depths of less than 4 feet involving swimmers using improper techniques," Doyle says.

Doyle's comment illustrates the importance of finding qualified coaches who can teach the differences between a standard dive and a racing dive. Lemaster is lucky, as he reports no serious injuries at Eisenhower over the years. "When people dive here, we know they know how to dive," he says.

Unfortunately, Reitzner can't make the same claim. One former Stoughton student-athlete became a quadriplegic after breaking his neck while diving into the pool's shallow end several years ago. Statewide, Wisconsin has reported three catastrophic swimming injuries since 1989 - two during practices and one during meet warm-ups.

Despite the fact that the NFHS ruling appears to have at least temporarily left Stoughton swimmers high and dry, it may quicken the process of building a new school pool. "This is actually helping us," Reitzner says. "Pretty soon, the thing is going to spring a leak so big that we're not going to be able to fix it. We need to build a pool, use the old pool for training until the new one is done, and then fill in the old pool and use the space for classrooms or some other need."

School officials recently met with an aquatic consulting firm to determine feasible options for the pool, which also serves the community. Renovation possibilities will be considered before new construction, says Gayle Kirchdoerfer, director of aquatic programming for the Stoughton Area School District. "Even if we make one change and dig the pool deeper, the rest of our facility will have to come into compliance with current standards for everything else," she says. "That's why we're gritting our teeth."