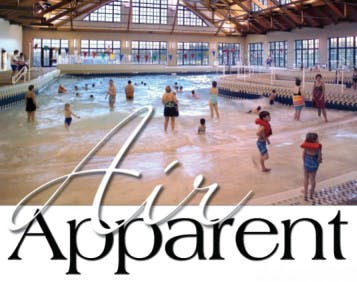 The wave of leisure elements that has swept over the landscape of indoor municipal, private and college pools has had many broad-based effects. A variety of moving-water features, such as play structures, lazy rivers, water slides, spray heads and wave pools, have brought about greater creativity in natatorium design and an expanding client base that includes families with young children, teenagers and seniors.

But a growing concern among owners, designers and users is whether indoor conditions in the typical pool environment are properly controlled. The same trend that has turned most natatoriums into what are essentially water parks has left in its wake air quality that can range from uncomfortable to intolerable for users, spectators and employees.

Design professionals have the responsibility of ensuring that a building's heating, ventilation and air conditioning (HVAC) system can minimize chlorine odor and humidity. However, while pool architects and engineers believe they fully understand the impact aquatic activities have on the design of HVAC systems, indoor aquatic trends have outpaced the design guidelines currently being used by design professionals.

Over the past three years, Hastings & Chivetta Architects has collected data at a number of indoor pools around the country in order to study changes in space temperature and relative humidity as circumstances in these facilities change. Analysis of the data indicates that of all the variables at work in indoor pool environments, water in motion has the most dramatic impact on air quality. A prime example involved a municipal aquatic center in Peoria, Ill., where natatorium conditions were maintained within the design parameters of a relative humidity below 60 percent. However, when leisure activities began at 11 a.m. and the water-play features and water slide were turned on, the relative humidity increased to more than 70 percent. An increase in relative humidity can cause the space to feel muggy and users to complain that the pool is hot and stuffy.

Competitive pools are also affected by moving water parameters. When large swimming meets extend over several hours, the movement of water in the space can have an impact on the evaporation rate and relative humidity in that space. A trend log was kept of air temperature and relative humidity in a 50-meter competitive-pool natatorium in St. Peters, Mo., used for a regional event that attracted more than 700 swimmers. Team warm-ups began at 7 a.m., and races were scheduled from 8 a.m. to noon and from 1 p.m. to 5 p.m. Data was collected at the top of the bulkhead. The relative humidity at the surface of the pool increased dramatically throughout the day. During lunch, when the pool's surface was no longer being agitated by swimmers, a drop in relative humidity occurred. A major research university is currently studying whether an increase in relative humidity and the corresponding reduction in the oxygen level could adversely affect the performance of athletes in indoor natatoriums, particularly toward the end of competitive meets.

Pool HVAC systems have traditionally been designed based upon the effects of flat water, taking into account the area of wet surfaces, the pool water temperature and the relative humidity of the space. However, the data collected suggests that water in motion may impart a greater demand on the HVAC system than initially thought.

When a facility features both flat and moving water, the moving water should determine the capacity of the mechanical systems, since water that is moving releases more humidity to the space due to the airflow across the water surface. The evaporation rate of moving water, though, isn't easy to determine. The faster the air moves across any water surface, the higher the evaporation rate. However, "air movement" in the case of moving water involves the water squirting from a fountain, the water running down a slide, the motion of a wave in a wave pool, the spray head on a play deck or the kicking of water in the airstream by a competitive athlete. It is therefore important for the operator and designer to discuss how the pools will be programmed and scheduled for each activity.

Designing buildings' HVAC systems to respond to moving water has been difficult, as engineers have had to make assumptions regarding relative air speed and the effects on evaporation. Water- feature manufacturers supply information regarding flow rates in terms of gallons of water per minute (GPM) running through their products, but the design team - even while knowing how fast water is moving over or through each feature separately - is challenged to evaluate the effects of all the pieces of equipment working together. Research by such organizations as the American Society of Heating, Refrigerating and Air Conditioning Engineers (ASHRAE) is currently under way to establish better design guidelines for indoor pool environments.

The area of wet surfaces in the natatorium must also be taken into consideration when calculating the evaporation rate. While it is relatively easy to determine the square footage of water contained in a pool, successful aquatic centers boast a variety of activity zones that encourage participants to move from one zone to another. This causes deck areas to become wet, and since water evaporates from any wet surface, regardless of depth, evaporation rate calculations must account for all wet areas - including decks, benches, seating areas and the stairs to the water slide. Analysis has revealed that accounting for all wet areas can increase a facility's evaporation rate by as much as 50 percent.

A building's mechanical system must provide ventilation air as required by building codes. Fresh air reduces the levels of airborne contaminants by mixing outside air with pool return air. Air from the pool is exhausted to maintain a negative pressure in the pool relative to surrounding areas. This is accomplished by returning slightly more air to the HVAC system from the pool area than from adjacent spaces. A simple way to verify this condition is to light a match outside any door opening in the pool area and check to see if the flame or smoke trail is drawn toward the natatorium. This negative pressure relationship must be maintained, or the odor of chlorinated pool air can migrate from the natatorium throughout the entire facility. If migration occurs, this chlorinated air will attack the ferrous metals in adjacent spaces, causing rust and sometimes deterioration of metal components.

The air distribution system should ensure adequate air movement throughout the pool enclosure. While air motion increases evaporation, inadequate air motion can create indoor air-quality issues. Ductwork should provide supply air both near the floor and ceiling. Supply air should be directed toward windows, skylights and doors in a uniform distribution pattern to reduce the potential of condensation forming on glass surfaces during cold weather. To reduce condensation, perimeter supply registers should direct air upward and parallel to large windows. Supply air should be provided at the deck level to provide conditioned air to mix with the pool surface air. This mixing provides better water chemistry by promoting the release of chemicals at the water surface.

Return air should be collected high and low within the pool space. Moist air near the ceiling is collected and removed from return-air grilles high in the space. Low returns allow air to be removed from the activity zone and at the level of the pool. This improves the air quality at the deck level and assists with the collection of chemicals released during water treatment cycles.

Separate exhaust air systems have been installed in several newer facilities. These exhaust systems have been located near areas where high evaporation is anticipated, such as above play structures, slides and spray heads. Exhaust systems located at the deck level are designed to draw air across the pool surface during competitive events to improve air quality where athletes' performance takes place. In addition, these low exhaust systems can be used to evacuate chemicals released during water treatment cycles.

Existing pool dehumidification systems are being retrofitted with dedicated ventilation air systems. The traditional dehumidification system draws air into the system from a louver connected to the outside. This air is conditioned in the HVAC system before it enters the pool enclosure so equipment capacity is expended to condition the fresh air. The addition of a dedicated outdoor air unit is like turbocharging existing equipment. This dedicated unit is designed to handle all of the fresh-air requirements so the existing system actually gains capacity to handle current conditions.

Communication between staff members is instrumental in the successful operation of indoor pools. The aquatics director must keep the facility manager apprised of changes regarding the scheduling of programs, type of equipment to be retrofitted and changes in the water temperature. The installation or retrofit of a new play feature that increases the evaporation rate of water can adversely affect the performance of the mechanical system. If pool water temperature is increased above original design standards, the mechanical system capacity needs to be verified. Several years ago, the director of an aquatic facility complained that the windows were sweating, and blamed the mechanical system for not functioning correctly. After reviewing the situation, it was discovered that the aquatics director had raised the pool water temperature to 86 degrees for children and adult programs after the swim season. The increase of 4 degrees in water temperature created too much dehumidification load on a system designed for 82-degree water.

Facility operators should track their system operating performance. This can be accomplished with the building's energy management system, through the dehumidification equipment or by using data loggers. The temperature and relative humidity should be logged to verify system performance and to help personnel understand the effects of daily operation on indoor conditions. In addition, this information could be useful if a complaint about the air quality were to arise.

Moving water has increased the difficulty of understanding and designing the indoor pool environment. Certainly, successful aquatic centers will continue to include a variety of pools, with water movement created by athletes, interactive play features and users moving from pool to pool. Facility and aquatics directors must understand and respond to changes in aquatics programs to maintain good indoor air quality. The ability to track indoor conditions will help maintain indoor conditions that participants find comfortable and inviting.

Designers must also increase their understanding of the implications of providing a comprehensive aquatic environment. Research and design guidelines must be incorporated into all projects. Data and information should be shared between architects and engineers to design and construct better building enclosures and mechanical systems. The effects of moving water need to be quantified so there can be a set of standards for design to be applied to tomorrow's aquatic facilities.