Already popular with the younger set, spray parks are gaining more mature fans, too - thanks to low installation and operational costs. 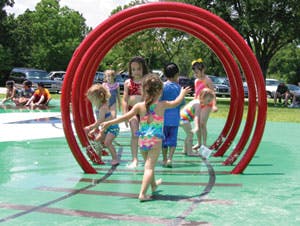 In the several years leading up to its 2001 closure, the outdoor pool at Baytown, Texas' Roseland Park lost a lot of money. In fact, each day Baytown Parks and Recreation continued to operate the 52-year-old pool was another day the department practically flushed money down the drain.

"That pool was built in the late 1940s," says parks and recreation director Scott Johnson. "The attendance was poor and it was going to take a zillion dollars to renovate the pool. Nothing was working. We were losing about a foot of water a day because all of the pipes were rusted. We were pumping water right into the ground."

Faced with both limited funds and motivation to renovate the existing pool - "If we fixed it, we'd still have the same pool," says Johnson - Baytown filled the old shell and replaced it in 2002 with a $175,000 spray park. The park's various railroad-themed play features reference the city's heritage, but also provide ample entertainment for youths of all ages. "It's nothing to see 50 to 60 kids out there every single day," Johnson says of the spray park, which is open from April through October. "This place is birthday party central."

Moreover, the cost of operating the spray park - which uses a computer-automated vortex pipe system and has no standing water, thus eliminating the need for lifeguards - is a drop in the bucket compared to that of the pool it replaced. "This thing is a champ," says Johnson. "I look at it and say, 'Why didn't I think of this a long time ago?' "

Municipal recreation administrators everywhere - particularly those in charge of outdated, poorly attended outdoor pools - are asking themselves that same question.

The recent rise in popularity of spray parks (or spraygrounds, as they're sometimes called) has been fueled by several factors, including tighter parks budgets and the public's changing tastes. "People are looking for different kinds of experiences, and therefore, you have water parks, spraygrounds and lazy rivers. These things really attract people," says Jim McLelland, director of the Greater Huntington (W.Va.) Park and Recreation District, which in June replaced its 52-year-old Olympic Pool with a $450,000 sprayground. "The old swimming pool, which was just a place to swim and dive, doesn't have the magic it had at one time."

Nevertheless, decisions concerning the status of programs that may be displaced by a pool closure will have to be properly addressed. Scot Hunsaker, president of St. Louis-based aquatics consultancy Counsilman•Hunsaker, recommends holding community forums and other types of discussion groups. "It's very hard for communities that have offered aquatic programming to just walk away from it," he says.

Such was the case in Huntington, where a small but loyal group of Olympic Pool supporters protested the facility's closure until the bitter end. "They certainly weren't the majority by any stretch, but they were vocal," says McLelland. "They said, 'You can't do away with a pool that I swam in.' There was this sentimental attachment to it."

But fortunately for McLelland, when the GHPRD permanently closed Olympic Pool in 2002, he could refer area residents looking for learn-to-swim classes and other basic programs to the local YMCA, which continues to operate three pools, including an outdoor pool similar to the former Olympic facility. "Occasionally, somebody will come up to me and say, 'You shouldn't have torn down the pool,' " says McLelland. "But we're receiving very little static. There's no big groundswell anymore."

Pointing out the secondary benefits of a spray park can also help residents reconcile with the loss of their pool. "Spraygrounds give owners the opportunity to turn an otherwise seasonal object, depending on the location, into a year-round element, like a fountain," says Stephen Springs, a principal with Dallas-based Brinkley Sargent Architects. "Usually they're software-driven anyway, so you can turn them into really visual features."

These positives notwithstanding, rec professionals shouldn't necessarily expect to get away with installing a spray park on the cheap. True, tremendous savings can be realized if a spray park is master-planned or built as one component of a larger outdoor aquatic facility, and its piping is tied into the main system. But in some locales, water-treatment requirements can raise the cost considerably.

"Like a lot of aquatic facilities, it's hard to speak about spraygrounds on a national basis because codes vary so much from jurisdiction to jurisdiction," says Springs. "What may be really cheap for one city in one state may not be for another city in another state. Some jurisdictions will require you to filter the water and basically treat the sprayground like a pool." For example, a recently passed law in New York requires all spraygrounds to filter their water through UV systems. Says Springs, "Once you put something that high-end into a sprayground, all of a sudden it isn't so cheap anymore."

Fortunately for Baytown, its spray park was spared such a mandate. The park's simple and inexpensive design - domestic water is pumped through the system once before ending up in city storm drains - is one of Johnson's favorite features. "It's just a glorified irrigation system," he says. "Before the season starts every year, my crews replace the gaskets and valves to keep the water spraying at a consistent pressure. That probably costs only a couple hundred bucks. If you add the labor costs, it's probably $500."

Other regular maintenance costs include trash cleanup, which because of the park's popularity has become an everyday job. "We have to have somebody out there every morning cleaning everything up, weekends too," says Johnson. "It's not that trash is everywhere, but the barrels are full."

Baytown's rec department doesn't mind the work. In fact, the spray park is such a big hit with residents that the city is planning to add up to two more facilities within the next five years, to help alleviate some of the strain on Roseland Park. "We have a councilman who lives right across the street from the park," says Johnson. "He's always saying how busy that place is, which is a good thing."