Sensible and informed pool-water chlorination is the most cost-effective and user-friendly way to mitigate the potential for recreational water illnesses. 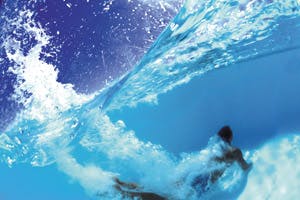 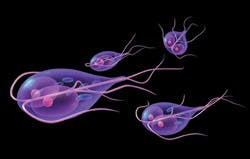 ALIEN INVASION Giardia (pictured), cryptosporidium, shigella and E. coli are among the most common germs that cause recreational water illnesses.
Therefore, many facility operators look to the ongoing cost of chemicals as the primary factor in determining a sanitizer system type. In a December survey of 10 large commercial pool chemical suppliers around the country, only one of them was able to provide a quote for gas chlorine (approximately $1 per pound), but all of the vendors provided quotes for 12 percent concentrate sodium hypochlorite and pails of calcium hypochlorite. Costs of liquid chlorine ranged from $1.80 per gallon in Arizona to $2.65 per gallon in Colorado, with an average cost per gallon among the 10 vendors of $2.16. Costs of tablet chlorine fluctuated between $1.70 per pound in Texas and $2.78 per pound in California, with an average per-pound price of $2.29 among the vendors. At first blush, the costs of the two chemicals look substantially similar. However, it takes 1.5 pounds of calcium hypochlorite to equal one gallon of 12 percent strength sodium hypochlorite, so the actual average cost of tablet chlorine is $3.44 for an equivalent $2.16 unit of liquid chlorine. That means that an outdoor 25-yard-by-25-meter pool will require a daily average of 16 gallons of sodium hypochlorite or 24 pounds of calcium hypochlorite to maintain a setpoint chlorine residual of 1.5 ppm. Therefore, using the average cost for chemicals provided above, the chemical cost per day would be $34.56 for liquid chlorine and $54.96 for tablet chlorine. When deciding what type of sanitizer system to use for a given pool, it is important to look at local availability of chemicals, the advantages and disadvantages to each one, their costs and the initial capital expenditures associated with the systems. Additionally, insist that the vendor provide detailed lifecycle cost analyses - including such factors as electricity usage, required monthly maintenance and replacement costs for major components. Silver bullet? Sorry, but in the world of pool-water sanitizer systems, there is no such thing. Armed with the facts about each type of system, however, pool operators can effectivly and cost efficently turn their facilities into RWI-free zones.
Sign Up for AB Today!
Get industry news, insights, and new product information delivered straight to your inbox.
Read Next