In The Root Zone

Successful natural-grass field construction begins at the bottom - and a host of natural, sand-based and sythetic additives and amendments can help. 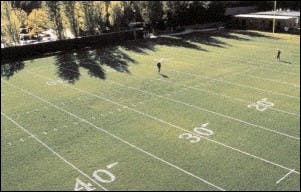 The type of root zone specified will vary depending on the field's expected level of use; the type specified for a recreational soccer field might not adequately serve a professional football stadium, for example. In this context, "level of use" refers to both frequency of use and intensity of use.

Intensity of use refers to the level of player performance or competitiveness. For instance, five hours of youth soccer play will apply less stress on a field than will five hours of collegiate or professional-level soccer. In addition, wear patterns will vary; lower competitive levels will tend to result in wear patterns clustered around the middle of the field and in goal mouth areas, while field wear at higher competitive levels will be less concentrated. The relative importance to a facility owner of frequency of use versus intensity of use is an extremely important factor in rootzone system design.

Soil-based fields have certain advantages over other types of root-zone constructions. Soil-based fields have higher water- and nutrient-holding capacity and generally have higher frequency-of-use capabilities. Soil-based fields, if maintained in an uncompacted and well-aerated state, have the greatest potential for high soil-shear strength characteristics. They are, however, the type of root-zone system most prone to compaction, especially when use capacity is exceeded in terms of frequency or intensity. Soil-based constructions also have the greatest limitations to play over wideranging moisture and environmental conditions. That is, soil root zones will deteriorate rapidly if played on in periods of excessive soil moisture.

Sand-modified root zones are those native soil-based fields to which sand has been added on-site, normally during aeration or top-dressing programs. Sand increases the internal friction of the soil, leading to greater compaction resistance as more sand is added.

Enhancements in soil aeration and drainage would not be expected as an immediate effect of the addition of sand until the amount of sand exceeds a threshold proportion, typically a mix of 60 percent sand to 40 percent soil on a volume basis. Significant increases in drainage and aeration properties are not typically observed until sand volume proportions exceed 80 percent or more, depending on the particle size distribution of the sand and soil components.

Sand-amended root zones are those that have native soils mixed with sand as part of the construction design specifications. (Organic components are sometimes included as part of the mixture.) To ensure proper and thorough mixing of the sand and soil components, the mixing and blending should take place off-site, rather than blending on-site with a rotary tilling tractor.

The performance of sand-amended fields varies widely depending on the proportion of sand and soil, as well as the relative particle size distribution of each of the components. The ratio of silt to clay and the mineralogy of the silt and clay fractions are important considerations. Adequate performance of these fields requires considerable soil science expertise to ensure long-term success, and consultation with an experienced sports turf agronomist is strongly recommended.

Sand-based root-zone constructions are on the high end of the scale in terms of cost and performance potential. Sand-based root zones generally have a much higher intensity-of-use capability than do other types of fields; however, because of their granular makeup and lack of internal soil-strength characteristics, they do not necessarily have the highest frequency-of-use capability. Sand-based systems do make up for this drawback by allowing live play during highly variable weather conditions, including severe and intense rainfall events, whereas a soil-based system would deteriorate rapidly under the same conditions.

A well-designed and constructed sand-based field will provide a root zone that has high aeration and drainage rates due to its greater proportion of macroporosity (large pore spaces). A by-product of this is reduced moisture retention, meaning that a sand-based field can be droughty. The low-reactivity silicate minerals of which sand-based root zones are commonly composed have a low buffering capacity - a characteristic that aids soil in resisting drastic changes in pH. This low buffering capacity is exhibited as a low CEC (cation exchange capacity, or the soil's ability to retain nutrients), creating a system that is prone to vast and rapid soil chemical changes. To counter these effects, an organic amendment is often added. It should be noted, however, that organic constituents vary widely as to their physical and chemical characteristics and therefore their performance characteristics will vary widely. All peats, in other words, are not created equal.

To counter the effects of inherent droughtiness in sands, sand-based systems often are built over a layer of gravel. Coarse gravel underneath a layer of finer sand will impede drainage under non-ponded (unsaturated) conditions. This impedance of water movement effectively increases the waterholding capacity of the root zone. The larger the contrast in pore sizes between the coarser layer and the overlaying finer textured layer, the more water that the root zone will retain.

The danger is having a particle size contrast that is too large or a root-zone depth that is too shallow - in either case, much or nearly all of the root zone stays excessively wet, resulting in an environment unconducive to turf growth, health and development. One signal of excessively wet conditions in a sand-based system is the production of excessive thatch in sod-forming grasses or elevated crowns in bunch-type grasses. While extensive and often drastic cultural techniques are employed to reduce thatch under these conditions, proper aeration and drainage in the root zone would eliminate the problem.

While any of these root-zone construction methods may be used, a new generation of synthetic sports turf root-zone amendments are now available for sand-based, sand-amended, sand-modified and soil-based constructions. The inclusion of a synthetic rootzone amendment material can enhance aeration and drainage characteristics, and can improve soil stability. These characteristics can result in a field that is playable under a broader range of climatic conditions or one that is playable sooner following heavy precipitation.

These amendments vary from soil conditioners intended to improve soil chemical characteristics such as water or nutrient-holding capacity to those intended to improve physical characteristics such as bulk density and drainage capability. The past seven or eight years have seen the introduction of fibers, fabrics and grid systems that their manufacturers say improve the mechanical performance of sports turf root zones.

Many of the materials incorporated into soil act simply to increase the internal friction (or stability) of the soil. Increasing the internal friction of a finer textured soil (a loamy or clayey soil) may slow the rate and degree of compaction. It should be noted, however, that synthetic materials introduced into the soil can also make mechanical aeration more difficult and may therefore leave you with a harder field surface than you started with. Amendments that increase the internal friction include natural and synthetic fibers (wool or animal hairs, plastic fibers, yarn, cloth string or fibrous organic components such as sphagnum peat), and granular and crumb-type products (crumb rubber, sand granules, calcined clay, diatomaceous earth or zeolite particles).

Fabrics (burlap fabric or carpet backing, landscape cloth and various kinds of netting), used to stabilize root zones by placing horizontal layers at or near the surface of the soil, perform with variable results depending on the amount of intertwining of roots with and through the fabric. Even under the best of circumstances, turf anchorage will be limited by the strength of the soil. Fabrics can also create a horizontal plane of shear that can cause turf to shift under an applied lateral force, and also pose some limitations to turf cultural management practices, including aeration, vertical mowing and slicing. The aperture openings of the fabric weave will to a large extent determine the interaction of the fabric with the soil system.

An important principle in the addition of reinforcing materials to the root zone is interlock, the interconnectivity of the soil with the reinforcing material. It relies not just upon the rubbing resistance of materials against each other, but upon actual physical bonding or connectedness. A good example of interlock is in natural wetland peat deposits, where extensive intertwining creates a very stable peat surface that will remain so as long as the wetlands remain undrained and the interlocking fibers unbroken.

One benefit of using resilient rather than static materials in these turf systems is that as the system bends and flexes, it creates a three-dimensional system of interconnected porosity, improving drainage and aeration.

Whatever root-zone system is employed, a qualified sports turf agronomist (or a landscape architect who works with sports turf specialists) can increase the likelihood of a successful and satisfactory sports field. If considering any of the more technologically advanced systems, insist on being shown sound research conducted by independent agronomic researchers in multiyear replicated trials, not just testimonials and glossy color photographs.

Chosen with an eye toward the type of play and amount of use that is expected on the field, the proper rootzone system is the foundation on which successful sports fields are built.