The Tampa Bay Rays have played on synthetic turf since their inaugural season in 1998, but the surface installed at Tropicana Field this past offseason is different. 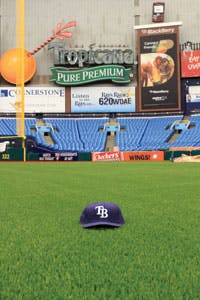 The Tampa Bay Rays have always played on synthetic turf, but Tropicana Field was outfitted with new, specially shaped fibers this offseason.

The Tampa Bay Rays have played on synthetic turf since their inaugural season in 1998, but the surface installed at Tropicana Field this past offseason is different. Fans may not notice from their stadium seats or living room couches, but each synthetic fiber in the new field is shaped like the Greek letter Omega. The design goal behind these thicker, concave filaments is to keep them upright, ensuring predictable performance as base hits bounce on them and bunted balls roll over them.

On the surface, it may seem like a subtle change, but the latest advances in synthetic turf are deeply rooted in fiber technology. The departure from smooth, rectangular blades that tended to lie flat hasn't come overnight, but field manufacturers have been drawing unprecedented attention to their fiber tweaks this year in particular. One turf company touts the manufacturing of its latest fiber as "the biggest technological advancement the industry has seen in decades."

Separating state-of-the-art yarn manufacturing from marketing spin can be challenging. For years, at least, fibers have taken one of two forms - monofilaments or slit-film tape. Monofilament fibers are extruded as singular strands, while slit-film fibers are cut from sheets of polymer to a predetermined width and then perforated by design. During slit-film installation, the perforations are combed through, or fibrillated, to form the individual filaments that will comprise the finished playing surface. This process is not to be confused with post fibrillation, which is the unintentional and undesirable fraying of fibers over time due to wear.

Currently, fields composed of slit-film fibers are believed to outnumber monofilament fields, for no other reason than slit-film technology has been around longer. Some fields feature a hybrid of both fiber types. "There is market demand on both sides," says Axel Hinrichs, CEO of Calhoun, Ga.-based yarn manufacturer Polytex USA. "Some people are strong believers in fibrillated yarn, and there are strong believers in monofilament yarn."

The manufacturing process for both types involves taking raw materials - namely, the polymer (polyethylene is now used exclusively for long-pile turf) and color - and melting them in an extruder. The melted material is then either formed into a film and cooled or pushed through a spinneret and cooled. The spinneret features an interchangeable die plate in which holes are cut in the shape desired for the finished fiber. Monofilament turf fibers, which have emerged as a popular alternative to slit film only within the past five years, are manufactured in dozens of different shapes - from horseshoes to dog bones - when viewed in cross section. Rectangles, triangles and diamonds are common, as are turf blades exhibiting one or more vertical spines along their length. One fiber introduced this year combines a concave shape with multiple spines, much like a natural grass blade.

Shape can determine how well a fiber resists fraying or how the entire field responds to solar glare and heat retention (since a shaped monofilament loses some of its gloss). Above all, various shapes have been introduced to enhance fiber memory - the ability of the filament to stand up after being trampled down. "It's kind of gotten to where every six months somebody comes out with a new shape, and we've played into that, as well," says Eddie Brown, sales manager for Bonar Yarns in Enka, N.C. "We can make any shape that anybody would want or could think of. We just make whatever we think is going to work the best for the different applications."

But shape is only one third of the monofilament fiber equation. The other two thirds - polymer and process - are harder to explain, since both are the stuff of proprietary secret. Suffice to say that even though polyethylene is the polymer of choice among all manufacturers of long-pile synthetic turf, polyethylene formulas vary from one manufacturer to the next as each searches for the right chemistry to balance fiber softness and rigidity. Chemistry also plays a role in a field's ability to maintain color, withstand UV exposure and reflect heat.

Process, or how raw materials are oriented into a specifically designed monofilament fiber, likewise differs depending on the manufacturer. "The extrusion process is about how you orient the yarn to it its characteristics, such as width, thickness and denier," says Ian Petrie, vice president of sales and marketing at TenCate Grass North America in Dayton, Tenn. "It's done differently from machine to machine."

Manufacturers' specifications often include a denier, a yarn's weight measured in grams per 9,000 meters of material. More important in terms of finished synthetic turf quality is face weight - the combined weight of fibers and the backing to which they're tufted, which is measured in ounces per square yard. In other words, fiber exhibiting a high denier number, but sparsely tufted, will not add significantly to the face weight of the finished field. Says Petrie, "The heavier the face weight, the more yarn that's in the product." 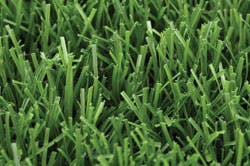 An online review of manufacturers' product lines reveals that other specifications can differ substantially. Face weights vary (in 2- to 3-ounce increments, typically) from 36 ounces per square yard to 66 ounces per square yard, with the most common face weights specified in the 40s. Yarn ends per tuft are offered at five, six, eight and 12, with six- and eight-ply bundles being the most popular. Pile heights, dictated more than any other spec by what sport or sports will be played on the field, come as low as a half-inch for field hockey to as high as 2Â½ inches for football, with multipurpose fields falling somewhere in between.

College and high school fields are often designed for multipurpose use, but high-level competition can require a dedicated field with dedicated design considerations. "We will design a yarn with a specific application in mind," Petrie says. "In Europe, soccer is a big, big market. We've got a full range of yarns that are soccer-specific."

When asked how a given sport influences yarn design, Petrie adds, "Just think about it. In American football, you basically have guys running across a field, whereas in soccer, it's all about the ball contact with the playing surface. We want this fiber to stand or be consistent in the way it lays, so we have a level, consistent playing surface. In field hockey, it's all about the ball roll, but at the same time you're using a stick to drive that ball. Very specific yarns need to be applied for these different sports."

There is some crossover. Ideal for high-end soccer applications, monofilament fiber serves football - which takes ball roll out of the equation, for the most part - equally well. Says Petrie, "A soccer system is good for American football, because at the end of the day, there's not so much ball contact with the surface. It's about the players' performance."

What about at the end of a year, or several years? How do today's fibers stand up to all that foot traffic?

The Lisport test is widely accepted as the best means of predicting the performance of synthetic turf systems over time, and comparing one system against another. It involves rolling and sliding studded cylinders (one in front of the other) over a narrow swatch of turf. One trip down the turf (known as a cycle) simulates one hour of use by athletes wearing cleats. The turf is then inspected every 2,000 cycles for such wear indicators as fiber splitting and matting. Assuming a field is used 40 hours per week for 52 weeks, it will log 2,080 hours of use per year.

Manufacturers should be able to provide buyers with the minimum number of Lisport test cycles their products are subject to, or how well specific field designs have actually fared when tested. A quality field should exhibit fiber integrity and resilience after 20,000 or more testing cycles. Some field designs have been tested to 100,000 cycles without exhibiting significant failure.

For Hinrichs, who has been in the rough-and-tumble turf industry merely a year after producing polymer filaments for other products, it all begins and ends with the quality of raw materials. "Coming from the chemistry side, I've always believed there's a better solution in terms of the chemistry to make the grass stand up longer and be more durable," he says. "That's always going to be the goal - how can we improve the grass so that it's more durable?"

Research conducted in 2008 by Dow Chemical Company determined that fibers extruded from octene-based polyethylene resins can last twice as long as those made from butene-based resins, while not significantly adding to the field's manufacturing cost. octene-based resins also exhibit 30 percent better abrasion resistance, as reported by PanStadia.

Still, fibers don't stand alone in the durability battle - "Turf construction, face weight and infill choice and amount all have a part to play with regard to durability," Petrie says - but clearly the science of synthetic yarns has progressed by leaps and bounds since the 1960s, when highly abrasive knitted nylon carpet ruled the day. Polypropylene, too, had its moment in the sun, but since has been relegated to the shadows of textured-fiber thatch layers, where the polymer's stiffness is better suited to supporting longer polyethylene fibers and minimizing infill migration (and even overall application). By the late 1990s, what's referred to as third-generation synthetic turf took root, with softer polyethylene fibers filling the fields and needs of end users around the world. To appreciate just how much trust in the technology has matured, consider that by the time New Meadowlands Stadium in East Rutherford, N.J., hosts Super Bowl XLVIII in January 2014, four consecutive Super Bowls will have been played on synthetic turf.

What comes next is anybody's guess, but it can be guaranteed that manufacturers will continue to tweak yarn formulas and fiber designs in their attempts to stay a step ahead of the competition. "It's getting bigger all the time," Brown says of the industry at large. "It'll be interesting to see how it's going to grow and change."