Within a four-week span last fall, a 71-year-old soccer spectator in Demarest, N.J., and an 11-year-old middle school football player in Fort Myers, Fla., were struck and killed by lightning. 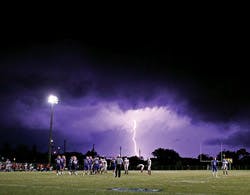 Viktor Ovsyankin died on Sept. 7 while watching his grandson play a freshman soccer game at Northern Valley Regional High School, which did not have onsite lightning detection or prediction equipment. At the time, Ovsyankin was standing near two trees that sustained lightning hits. The storm "came out of nowhere," district superintendent Christopher Nagy told NorthJersey.com, and nine students also were treated at area hospitals after complaining of "tingling sensations."

Then, on Oct. 3, a bolt of lightning entered Jesse Watlington's chest and exited through his heel while the boy was walking to football practice with his Southwest Florida Christian Academy teammates. He remained comatose until the boy's family took him off life support five days later. In November, Watlington's parents filed a multimillion-dollar lawsuit against the school and its operator, McGregor Baptist Church, contending that available lightning detection equipment was not working - a charge Pastor Richard Powell disputed, confirming to local reporters that the school's portable lightning measurement device was on but did not indicate danger.

After both tragedies, the communities involved purchased either lightning detection equipment (which tracks actual lightning strikes within a set parameter around a facility) or lightning prediction equipment (which identifies electrostatic energy conditions conducive to lightning activity). Multiple school districts and municipalities in New Jersey's Northern Valley are pooling funds to share a system with centralized sensors and numerous siren stations, while Lee County Public Schools in Florida - a state considered America's lightning capital - spent $176,000 to replace handheld devices with sensors and sirens on the rooftops of 13 high schools. With the new system, a horn sounds and flashing lights are emitted when lightning is detected within a 10-mile radius, and live electronic alerts are sent to designated cell phones and email addresses. Area private schools also upgraded their lightning equipment, and Southwest Florida Christian Academy officials were considering installing a permanent early-warning system.

"All individuals, particularly those in charge of sports and recreational activities, should be aware of the hazards, establish and follow appropriate guidelines and ensure that those around them do so," says Katie Walsh, director of the athletic training program at East Carolina University and chair of a group that recently wrote and published a new lightning position statement for the National Athletic Trainers' Association.

"The key to getting athletic directors, coaches and referees - and even parents and the wider community - to take lightning awareness seriously starts with education in combination with new technologies, including phone apps and outdoor alerting systems, that help take the guesswork out of when to cancel or postpone a game," says Frank McCathran, director of enterprise solutions for the Germantown, Md.-based Earth Networks' WeatherBug® brand, which provides weather monitoring and lightning detection services.

"Really, what people are buying is automation and removal of the human factor," adds Christoph Zimmermann, president of Wxline LLC, a lightning detection manufacturer in Tucson, Ariz. "Nobody likes the responsibility of making the call to postpone or cancel a game because of lightning."

As Lightning Safety Awareness Week approaches (June 23-29), it's worth noting that a record-low 26 lightning-related deaths were reported as recently as 2011, according to the National Weather Service, and the number of fatal strikes has been in decline for decades - ever since the urbanization of the United States began in the mid-1900s. That said, in 2012, lightning killed at least 28 people in 17 states; nearly half of those deaths occurred in Florida or New Jersey.

"There is something altering those statistics beyond chance, and I think it's a combination of education, the number of systems that are getting installed and people's general awareness of the dangers of lightning," says Bob Dugan, president of Sunrise, Fla.-based Thor Guard LLC, which is still the only manufacturer currently producing a lightning prediction system.

Dugan also argues that the traditional tech-free way of assessing lightning risk - the so-called 30/30 rule - is an outdated standard that should be abolished. That rule states that if fewer than 30 seconds pass between seeing lightning and hearing thunder, lightning is close enough to pose a threat. Then, activity must not be resumed until 30 minutes after the threat has passed.

"If you're a smart coach, you won't tell your kids to count if they see lightning; you'll tell them to get off the field," Dugan says. "They shouldn't try to figure out where it is. If you can hear it or see it, it's already too close."

And here, adds Dugan, is how student-athletes can take risk management into their own hands - and feet. "If a player walks off the field after seeing lightning, what is the umpire going to do?" he asks. "They can't play without a centerfielder. If more players would do that, it would drive lightning safety in that sport. Of all sports, baseball is the worst when it comes to acknowledging lightning."

The costs associated with lightning detection and lightning prediction equipment are similar and hover around $10,000 each for a base system, with a few additional thousand dollars for each individual siren station. At a time when education budgets are shrinking and manufacturers say few grant opportunities exist, school districts are somehow finding the money or partnering with neighboring districts and communities to split the costs and share the service.

But once a system is triggered in advance of an approaching storm, common sense must still prevail. "Even with the technology out there, combined with human observation, people fail to take the warnings seriously if they just stop the game and don't seek proper indoor shelter," says Rich Wills, co-owner of Commercial Recreation Specialists, a Verona, Wis.-based distributor of products and accessories, including lightning detection equipment. "I've seen baseball players go into foul territory during stoppage of play. They don't seek indoor shelter of any kind; they're just sitting around on the bench or having a game of catch. They stopped the game, but they're still in danger."

Given lightning's unpredictable nature, Wills adds that open structures such as dugouts - even bunker-style ones surrounded by concrete on three sides - aren't safe. "Lighting doesn't necessarily come straight down; it can also strike horizontally," he says. "There is no rhyme or reason to lightning."