[Photo courtesy of the Trust for Public Land]

Our definition of fitness has expanded beyond the narrow measures of muscle tone and cardiovascular health. Professionals in the athletics, fitness and recreation industries now understand true fitness to be an amalgam of many aspects of our being. It is now understood that our overall fitness can be impacted by everything from what we eat to the amount of sleep we get to the environment in which we exercise.

A study from the American Chemical Society, which involved a systematic review of a number of smaller studies, found that exercising in a natural environment "was associated with greater feelings of revitalization and positive engagement; decreases in tension, confusion, anger and depression; and increased energy." The study also found that those who exercised outdoors "reported greater enjoyment and satisfaction with outdoor activity and declared a greater intent to repeat the activity at a later date."

A number of organizations that understand the benefits of parks and green space are working hard to ensure that everyone, even those in dense urban areas, have a place near their home where they can move their bodies in a natural environment.

The 10-minute walk
In 2017, the 10-Minute Walk campaign was launched as a joint effort by the National Recreation and Park Association, the Trust for Public Land and the Urban Land Institute. All three of these organizations are central to the campaign and work on different aspects of the program based on their strengths.

Carter Strickland, New York State director at TPL, says his organization was tasked with getting mayors to sign on to a commitment to have 100 percent of their people live within a 10-minute walk of a park.

TPL has since expanded on the 10-minute walk by engaging communities to activate otherwise unused spaces through its Fitness Zone program, which helps communities create outdoor gyms through fundraising and charitable donations. Strickland says that there are currently 110 million people living in urban areas who don't have access to a park within a 10-minute walk of their homes. The Fitness Zone program is aimed at reducing that number.

"The Fitness Zone program has been effective for a number of reasons. One was that outdoor gyms tend to work well in smaller parks. They're also an easy way to activate a park," Strickland says. "It can be a small pad, and it can fit in a lot of places. It's easy to put it close to where people live or even within an existing park." 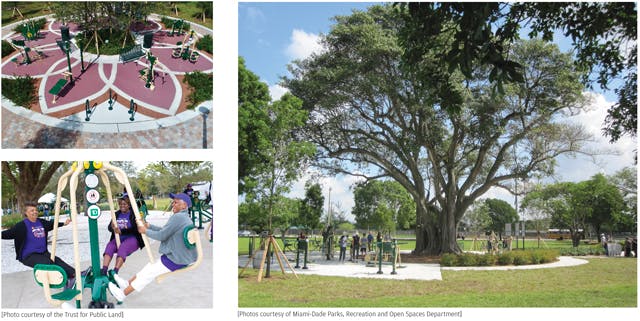 The program has proved popular, and to date there are 111 completed Fitness Zones across the country. Florida's Miami-Dade County, which encompasses 13,000 acres of park land, including 270 individual regional and neighborhood parks, is home to 28 Fitness Zones. "We've spread this now throughout the county and the Fitness Zones are heavily used," says Maria Nardi, a director in the Miami-Dade Parks, Recreation and Open Spaces Department. "We've built them in some of our regional parks, where they've been incredibly successful and also in our neighborhood parks."

Nardi says her department abides by a mission of "equity and access," seeking to "connect adults to nature through fitness." Not surprisingly, Miami-Dade has planned its Fitness Zones around available health data.

"The way that we sited them was by looking at health disparities in the Miami-Dade County community," Nardi says. "So wherever there is obesity, or obesity-related diseases, that's where we prioritized these Fitness Zones. We also made sure we targeted some underserved areas where people who may not be able to afford a gym can have these outdoor facilities available to them."

Miami-Dade has worked closely with TPL in rolling out the sites, leveraging TPL's expertise in fundraising, as well as the organization's extensive network of equipment manufacturers that participate in a competitive bidding program for each project. The equipment onsite can support a number of users at once so that even when working out in a group, each participant can get in a full-body workout, with equipment that can exercise legs, glutes, obliques, triceps, shoulders, chest and core.

Miami-Dade offers programming to complement the equipment at some sites, but Nardi says it varies on who takes advantage of that option. "It's more the seniors who want to learn how to train," she says. "People in their 20s to 40s, they really just want to do it on their own."

The holistic part of fitness is not lost on those communities that are adopting Fitness Zones. The parks, many of which were vacant lots prior to getting an overhaul, are much more than a pad and some outdoor fitness equipment.

True to Miami-Dade's goal of connecting adults to nature through fitness, planners of the county's projects have worked to ensure that visitors to their Fitness Zones feel immersed in nature. One Fitness Zone in Miami-Dade County includes a raingarden, an urban tree canopy for shade, and a plan to propagate native species of trees and plants. "You're not just experiencing an area with a Fitness Zone but also the experience of being around trees and butterfly gardens," Nardi says. "We really wanted these spaces to be integrated with the natural environment." 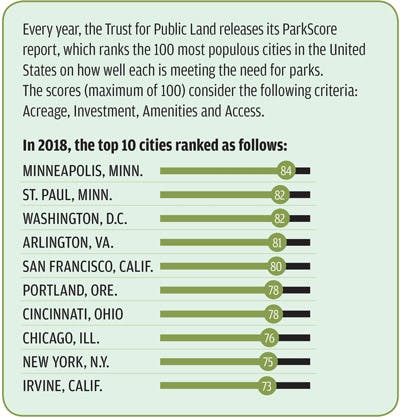 More than a park
The benefits to a community of parks and green space are real and supported by research. Earlier this year, the Oregon Parks and Recreation Department released a report that found participation by its citizens in outdoor recreation activities saved the state $1.4 billion annually in healthcare costs. The report estimates that Oregonians who participated in outdoor redreation in 2017 expended the energy equivalent of 144 million pounds of body fat.

Rachel Banner, senior program manager for NRPA, contends the evidence of how parks can benefit communities is beyond anecdotal. However, she says that it's not enough to just take a piece of empty land and call it a park. Installations like TPL's Fitness Zones, as well as careful programming and planning, are all critical to ensuring that these public spaces actually attract people.

"We see that disparities in park use often come down to the quality of the space, or the activation of a space," Banner says. "We know that spaces that are programmed and activated are more likely to be used. Another thing is green space, which has been closely linked to better health outcomes. So, making sure that the park spaces themselves have trees and a variety of flora and fauna are really important to also helping that neighborhood."

Green space is recognized by most as a necessary part of everyday life. Strickland cites TPL research that found that 75 percent of people believe parks, trails and open spaces are a central component of American healthcare.

Banner agrees, noting that nature affects health in a different way than physical activity. "It can help improve mental health outcomes and then also help with environmental health outcomes," she says, "like reducing rates of asthma in a community, or reducing heat island effects, so it cools cities when you have green plants in a neighborhood and people are less likely to have heat-related illnesses."

Given the known benefits of moving one's body and spending time in nature while doing so, access to quality parks cannot be an afterthought in city planning. Banner says that part of the structure of the 10-Minute Walk campaign is ensuring that mayors really embrace parks and recreation as a solution to many of our urban problems today. "Parks not only provide a great place to go and visit, they improve economies, and they increase safety," she says. "They increase rates of physical activity. They decrease rates of chronic disease, including obesity. They really provide resilience in cities, and they're really truly a health system."

This article originally appeared in the April 2019 issue of Athletic Business with the title "Take It Outside: The benefits of exercising outdoors" Athletic Business is a free magazine for professionals in the athletic, fitness and recreation industry. Click here to subscribe.