Following Texas Christian University's undefeated football season that ended with a Rose Bowl victory over Wisconsin, a $105 million renovation of Amon G. Carter Stadium began on the Fort Worth campus. 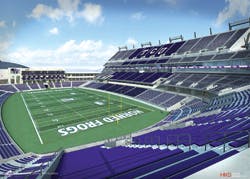 Following Texas Christian University's undefeated football season that ended with a Rose Bowl victory over Wisconsin, a $105 million renovation of Amon G. Carter Stadium began on the Fort Worth campus. The project represents the first major renovation to the 81-year-old stadium since the upper deck was added in 1956. The plan includes a seating capacity expansion to 40,000, with the ability to expand to more than 50,000; new and upgraded concessions stands; new elevators and escalators; a raised seating bowl on the west and north ends for enhanced field views; a new press box; and suites, club seating and lounges on the stadium's west side. Led by Dallas-based HKS Inc., the design references the 1930s style of Southwestern art deco prevalent throughout Fort Worth and the surrounding region.

Ground was recently broken for the $70,000-square-foot Auburn University Montgomery Wellness Center. Featuring weight training and cardiovascular areas, aquatics facilities, a track, a climbing wall and a multipurpose gymnasium, the $20 million facility will be made possible largely by student activity fees. Set in a region that has been identified as having one of the highest obesity rates in the country, the center will also include sun garden classrooms, performance labs and other program spaces designed to encourage people to make healthy life choices. Designed by Kansas City-based 360 Architecture in association with Montgomery, Ala.-based Infinity Architecture, the environmentally sensitive building will also include a reflecting pool to capture and filter stormwater runoff into surrounding bioswales and rain gardens. Additionally, a 100-year-old oak tree was preserved and incorporated into the design.

Construction is under way on a 10-acre site in the HomeTown development neighborhood of North Richland Hills, Texas, for a new multipurpose community center that represents the largest capital project in the city's history. Designed by Dallas-based Brinkley Sargent Architects, the $25 million, 86,000-square-foot facility will include a full-service senior center, a 300-person-capacity banquet hall with a kitchen and rooftop terrace, and a recreation center with a 1/8-mile elevated track and aquatics center. The facility will be located next to the existing municipal library, fulfilling city leaders' longtime vision of creating a city core.

City officials in Edmond, Okla., are hoping a $22 million competitive swimming pool and recreation center project can be completed by spring 2013. The city, the YMCA and the Edmond School District have joined forces to build the complex at an existing city parkâ¦

The Missouri City (Texas) Parks and Recreation Department has accepted a $950,000 grant from the Texas Parks and Wildlife Commission for a new tennis and recreation center. Missouri City will match the grantâ¦

Madison, N.J., borough officials have approved borrowing $3.5 million for fields that will represent the first phase of a recreation complexâ¦

City officials in Ogden, Utah, are proposing a $38 million recreation center that would include six tennis courts, an indoor velodrome, indoor fields, an Olympic-size pool and a 60,000-square-foot water park. If the facility is attached to two hotels, as proposed, it could potentially operate in the black, according to a recent feasibility study funded by the cityâ¦

Penn State's future 200,000-square-foot ice arena, set to open in 2014 and help the university launch Division I men's and women's hockey programs, recently got a name. Pegula Ice Arena honors alumnus Terrence M. Pegula and his wife, Kim, who donated $88 million to the project in Septemberâ¦

Glenville State College will be one of seven West Virginia state schools benefiting from the state's Higher Education Policy Commission's more than $76 million in recent revenue bonds sales. The school plans to build a new health and wellness education centerâ¦

The Utah State University Board of Regents wants to build a 28,000-square-foot, $7.8 million indoor basketball practice facility and volleyball competition venue. The proposal requires approval from the state Legislature.

The new Student Fitness Center and McCormick Hall at Illinois State University not only meets the fitness and recreation needs of the student population, it's also an academic venue for the university's nationally acclaimed and growing school of kinesiology and recreation. The 111,000-square-foot fitness and recreation component includes a climbing wall, an aquatics area with a lap pool and a whirlpool, spaces for group exercise and dance classes, weight training and cardio fitness spaces, racquetball courts, a jogging track, a gymnasium and multiactivity courts. Those amenities are complemented by food service and lounge areas, as well as support areas for recreation staff. The 68,000-square-foot kinesiology wing includes multiple classroom and lab spaces to support disciplines such as biomechanics research, athletic training, clinical instruction, sports psychology and exercise physiology. The facility also includes faculty offices and an instructional gymnasium.