Michigan Stadium Is at the Center of Pending ADA Litigation 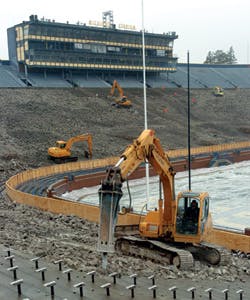 Where Mike Harris sits for the majority of his waking hours was decided when a car accident in September 1986 left him instantly paralyzed. Now, on the one or two Saturdays every fall that Harris, executive director of the Paralyzed Veterans of America's Michigan chapter, attends a college football game at Michigan Stadium in Ann Arbor, he'd like to at least choose where he parks his wheelchair.

As it stands, selection is limited to 45 wheelchair-accessible spots spread along row 72 in the south end zone, and another 45 in the north end zone. And that's not good enough - not for Harris, whose PVA group is mounting a legal challenge to the University of Michigan's seating practices based on the Americans with Disabilities Act, and not for the Department of Education's Office for Civil Rights, which within the past year has repeatedly informed Michigan that its stadium is not in compliance with the ADA.

Richard Bernstein, the attorney representing the Michigan PVA, chooses stronger language, calling university officials "arrogant," even "mean-spirited," as he alleges blatant defiance of federal law. "What the university is doing is a disgrace," says Bernstein, a Michigan graduate and a current lecturer in the U of M political science department. "They're actually arguing that the federal government is wrong and they're right. That's hubris."

With a present capacity of 107,501, Michigan Stadium is the largest college-owned football venue in the country, a distinction the university has never downplayed. In maintaining its status as the so-called "Big House," the stadium has undergone several renovations over the course of its 80 years, but none more controversial than the one nearing completion, or the one yet to begin.

The first point of contention is whether work done to the seating bowl over the past three years constitutes an alteration of the stadium's seating schematic, or mere repairs. The four-phase project - to be completed this August at a total cost exceeding $15 million, according to documents posted at umich.edu - effectively replaces all concrete and bench seats within the seating bowl, three-quarters of which is sunk below grade.

Given the ADA requirement that wheelchair-accessible seats comprise 1 percent of a venue's overall seating capacity (putting Michigan roughly 985 wheelchair slots shy of compliance), this would appear to have been an ideal opportunity to sacrifice a few rows of general-public seating in favor of wheelchair platforms at various ground-level vomitories ringing the stadium's 72nd row. When offered this suggestion, university spokesperson Kelly Cunningham responds, "That was strictly a repair project."

Such statements have long been an integral part of the university's ADA-immunity defense. By characterizing the work in such a way, U of M officials contend that Michigan Stadium need not adhere to the ADA's 1 percent provision, since it was neither built nor significantly altered subsequent to the law's passage in 1990. The Americans with Disabilities Act Accessibility Guidelines for Buildings and Facilities (ADAAG) defines an alteration as "a change to a building or facility made by, on behalf of, or for the use of a public accommodation or commercial facility, that affects or could affect the usability of the building or facility or part thereof." This definition was highlighted in a letter sent to the university last June by the Department of Education's Office for Civil Rights, which had launched an investigation of Michigan Stadium accessibility based on an ADA complaint filed in 1999. The letter cites the university's mischaracterization of past stadium projects as reason for reopening the investigation. During a 2004 site inspection of Michigan Stadium, OCR representatives found crews "obliterating entire sections of seats and replacing them," the letter states. "The university did not disclose the nature and scope of this significant alteration to the seating bowl." The letter goes on to add, "We are unable to understand the university's steadfast assertion that such extensive reconstructive work constitutes no more than a repair."

There's no denying that the university's proposed $262 million renovation of the stadium, which will add more than 80 suites and 3,200 club seats by 2010, represents a significant alteration. But university officials are again pleading ADA immunity as the law applies to the general seating bowl, despite the fact that the renovation calls for the widening of both general-public seats and aisles throughout. The number of wheelchair seats will more than triple, officials argue, with the location of new accessible areas along the west side of the bowl's upper rim (or row 92, according to Harris). However, the revised accessible-seating count of 282 still falls well short of ADA compliance, and it will do so even if the U.S. Department of Justice reduces by half the ADA's 1 percent benchmark, as expected. (The United States Access Board has already approved the reduction.) However, as a follow-up letter from the OCR warned in November, concerns over Michigan Stadium's accessibility may not be limited to the ADA. If, in fact, the renovation's price tag equates to 50 percent or more of the stadium's current fair-market value, additional accessible seating may be required under a Unified Federal Accessibility Standards definition of "substantial alteration."

As to the current number of accessible seats as a percentage of capacity, Cunningham offers, "Right now, we're meeting the need of our 53 [wheelchair-using] season-ticket holders and have been able to meet the need of everyone who has asked for an accessible seat."

Bernstein counters that such a stance completely undermines the ADA as written. "Individual stadiums do not get to determine how many seats they're going to make ADA-compliant," he says. "If the University of Michigan is allowed to get away with that argument, it will have a devastating impact on disabled people all across the country."

Clearly, stadium accessibility shortcomings are not an isolated occurrence at Division I-A institutions. AB contacted five of Michigan's peers with football stadium capacities exceeding 80,000. Only one came close to meeting the 1 percent mark.

For model ADA seating schemes, the Michigan veterans group looks no further than two of the Wolverines' fiercest football rivals: Ohio State University and the University of Notre Dame. With a capacity of 101,568, Ohio Stadium boasts 1,108 wheelchair-accessible seats, the result of a renovation completed in 2001. Notre Dame Stadium, renovated in time for the 1997 season, features 17 different wheelchair-accessible locations - with four immediately behind "preferred seating sections" along the sidelines, including one right at midfield.

"The requirements aren't just for the number of seats. The requirements also include dispersal across the variety of seats," says Joan Stein, president and CEO of Accessibility Development Associates, a Pittsburgh-based consultancy. "The problem is the assumption that people with disabilities don't have the money to buy tickets at the 50-yard line."

Sightlines over a standing person (think cheering fan) represent yet another ADA consideration, and a third point of contention for wheelchair-users at Michigan Stadium, according to Harris, who says his view of the field is frequently blocked by fans walking to and from vomitories. "In order for us to settle, that issue is going to have to be addressed," Harris says. "The seats are going to have to be located in a proper area so people are not walking directly in front of us."

In the end, says Stein, the spirit of the ADA must encompass the quality of the experience. "You can legislate the inches and the feet and the numbers, but there's so much more to the ADA," she says. "The ADA is a civil rights law. It's not a building code."

"The reason we have these regulations is not to place undue hardship on the institution," adds Bernstein, who is preparing to litigate the case pro bono all the way to the Supreme Court, if necessary. "It's to allow the percentage of people who are wheelchair users to be part of the Michigan experience. If you allow for people to be part of the action, if you make it easy for them to come, they will come. Period."