Construction to begin on activity center at Dickinson State University and at University of Oregon's Matthew Knight Arena. 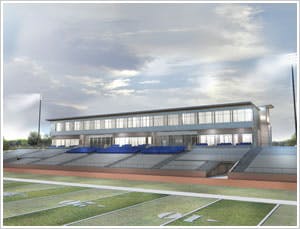 Dickinson State University Badlands Activities Center Cold ground was broken in January in western North Dakota for the Dickinson State University Badlands Activities Center, which includes a comprehensive renovation and expansion of the school's football stadium. Designed by Denver-based Sink Combs Dethlefs, the $13.8 million complex will be operated by the university and will be home to the Blue Hawks' football and track teams, but other major tenants will include nearby high schools and the Dickinson Convention and Visitors Bureau. Expected to open in December, the complex will feature nine stadium club suites and 360 fixed outdoor seats, community event areas, an eight-lane track, a synthetic turf field and separate locker rooms for university teams and high school teams. The second floor of the center's main building will house media and coaching suites.

University of Oregon Matthew Knight Arena Construction is under way at the University of Oregon's main campus for the Matthew Knight Arena, named in honor of the late son of Nike Inc. founder and project donor Phil Knight. Designed by Portland, Ore.-based TVA Architects Inc. in conjunction with executive architect Ellerbe Becket, the arena will replace the hallowed but outdated McArthur Court at the start of the 2010-11 Ducks' basketball season. The $227 million, 405,000-square-foot facility will include 12,500 seats in the bowl, as well as floor-level club seating, multiple retail locations and practice courts. Simultaneously, the university is constructing an adjacent alumni center. The two facilities will be situated atop a 377-stall underground parking structure, and will together create a new visual front for the campus.