Allowing for nighttime play, sports lighting has long been valued for its obvious utility. But only in recent years - and largely at professional and high-profile college and university stadiums - has it begun to evolve into an invaluable component of a given stadium's architectural expression. Following are examples in which the very fixtures that are illuminating the field of play are simultaneously an integral part of larger configurations or installations that help define a stadium's overall aesthetic. 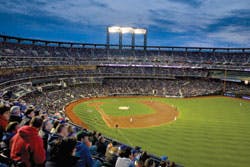 The sports lighting racks illuminating the New York Mets' year-old Citi Field are supported by structures designed to augment the facility's steel bridge motif - one favored by Mets chief operating officer and Brooklyn native Jeff Wilpon - that helps characterize the facility while metaphorically connecting it to New York's main boroughs. "It's a unique look in all of baseball," remarks Art Smith, a principal with M-E Engineers, which worked with the architecture firm Populous to ensure that the roughly seven hundred 150-watt metal halide lamps mounted in the impressive structures adequately illuminate the field of play while mitigating potential glare for players and umpires.

Crediting the visions of the owners and architects, Smith says the large-scale, 130-foot-long infield racks were designed, from a functional standpoint, to equal the lighting levels that are more commonly addressed by multiple smaller racks at similarly sized stadiums. "Normally you would have a rack at the infield area and then one near midfield," explains Smith. "But really what you have here is one long rack covering that whole zone." 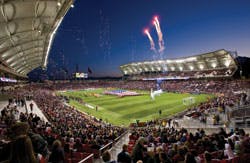 Sports lighting fixtures at Rio Tinto Stadium - the Sandy, Utah, home of Major League Soccer's Real Salt Lake - are integrated into one of the facility's primary architectural features, a roof canopy that varies in height to follow the contours of the nearby Wasatch Mountains. To minimize glare, MLS recommends lighting positions of at least 90 feet high. "Because of the sloping effect of the roof, some of the lighting dipped below this level and there was some concern about glare in the eyes of the people seated on the opposite side," explains Andrew Leeson, an associate with Rossetti, which designed the stadium. He adds that one of the challenges with any such soccer stadium lighting configuration is that it's particularly difficult to fully illuminate the corners and goal areas without causing glare in the eyes of corner kickers.

Using 3-D computer modeling, Rossetti and lighting specialists M-E Engineers found the ideal direction for each lamp in order to mitigate glare, while ensuring that the field lighting could remain underneath the visually striking fabric canopy, which is uplit to create a glowing effect when seen by spectators within and outside the stadium. 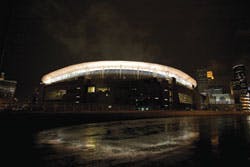 The decision to embed hundreds of high-efficiency 1,500-watt light fixtures in the leading edge of the canopy that essentially extends from foul pole to foul pole around the Minnesota Twins' new Target Field was made for numerous reasons, not the least of which was to create a well-lit playing field. The lights - augmented by numerous fixtures that light the front and back spans of the canopy from below - help underscore the canopy's role as the iconic architectural feature of the stadium, as it creates a hovering profile against the night sky. Such an expansive horizontal band of field lighting - which even cantilevers out 90 feet beyond the stands in right field - allowed the architects to avoid having to utilize a more standard right field lighting pole configuration, thereby preserving clear and largely unpolluted views of the city skyline. "One of the things that's special about this site is the view to downtown Minneapolis," says Bruce Miller, who led the stadium design on behalf of Populous. "So the sports lighting is tailored around that view. This creates a nice halo or silhouette for the ballpark without having the giant light towers."

Although the stadium's regular season debut isn't until April 12, Miller says the initial response from players has been very positive. "If someone hits a fly ball, it can move through that band very quickly, so there's not a huge bank of lights where the ball is going to be hanging in a big glare spot for a long period of time," Miller says.