Some within the Maple Leaf Sports & Entertainment ranks refer to it as the Gate 1 Spectacle - a 42-screen digital signage mosaic just inside the doors of Toronto's Air Canada Centre. 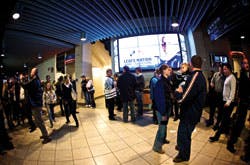 COLOR MATCHES With the help of LCD imagery, Toronto's Air Canada Centre assumes a different look depending on whether the Maple Leafs or Raptors are playing.

Some within the Maple Leaf Sports & Entertainment ranks refer to it as the Gate 1 Spectacle - a 42-screen digital signage mosaic just inside the doors of Toronto's Air Canada Centre. Situated at the gate through which a majority of Leafs and Raptors fans pass on any given game night, the year-old wall of LCD monitors serves as more than a means for advertisers to reach a captive audience - its sculpted appearance (certain screen tiles tilt and extend out from the rest) represents the art of the possible in the selling of arena concourses.

With many seating bowls selling out and ticket prices pushed to their limits, the overarching question, according to Collard, remains, "Where else can I find revenue? And we're saying you find revenue by selling sponsorship in the concourse areas."

At first, response from ACC sponsors was mixed. Surprisingly, smaller companies who hadn't dealt much with either the Leafs or Raptors were quick to embrace the new digital signage opportunities, while heavy hitters such as IBM, Coca-Cola and Ford dragged their feet. "Part of that, for some of them, was their ad agencies hadn't gotten their head around how to use digital signage yet," says Dwayne Brown, who steered the MLSE project to the finish line before leaving to join the Waterloo, Ont.-based consultancy Digital Display & Communications as director of operations. "It just blew my mind that they didn't get this right away, but when IBM's president finally came in and saw some content on our Gate 1 Spectacle, he was like, 'Oh, wow. I get this now.' It took maybe six months, and then everybody jumped on board. A year later, MLSE doesn't have any problem selling this stuff. In fact, it's a matter of trying to keep up with sponsor demand to get on these types of displays." 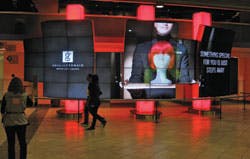 It will take no more than 18 months for MLSE to recoup its initial $3 million investment in digital signage hardware and software, which debuted in time for the 2009-10 season. But the planning process took considerably longer - by design.

Brown, who had been the point person when MLSE replaced Air Canada Centre's main scoreboard and thus was asked to assume the task of ramping up technology in the building's concourses, met in early 2009 with every consultant and digital signage company he could find to learn about the industry from both a hardware and software perspective. After hearing nearly two months' worth of sales pitches, Brown attended the Digital Signage Exposition in Las Vegas in late February of that year, and a vision began to crystallize.

What primary role the signage would play emerged as an important determination. "Is it informational? Is it entertainment? Is it advertising?" Brown says of the early internal debate. "In the end, it's all about making money somewhere along the way." When asked if digital signage can be all of the above, he adds, "Absolutely, and Air Canada Centre is a prime example of that. But you can't go in saying, 'I want to do it all.' You have to be focused and design your system around one thing or another. And once you get that part nailed down, then it's easy to figure out how to fit everything else in."

Brown focused on sponsorship retention first, but a close second on his to-do list was enhancement of the fan experience. MLSE eliminated the vast majority of the concourses' backlit signage, some of which hadn't changed in years, as well as all other extraneous "visual noise," as Brown calls it, and the walls even got a fresh coat of paint. The building was divided into dozens of distinct zones, which would help MLSE target potential advertising partners based on demographics as much as geography. Says Brown, "You know that the guy buying a hot dog on the upper concourse is a different demographic than the guy buying sushi on the event level, courtside." 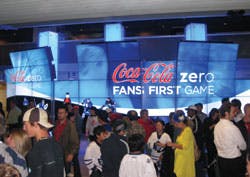 Once it had its programming priorities in order, MLSE could approach hardware and particularly software providers with requests for information that outlined exactly how it wanted the system to function. An obvious must-have was live triggers - the ability to broadcast video replays on every screen (or at least on part of every grouping of screens) in the concourse immediately after goals are scored out on the ice. Every Leafs goal is sponsored by Rogers Cable, a fact the digital signage also makes clear. "So the fan experience kind of follows you around," says Omnivex's Collard, "but in monetizing ways."

An MLSE staffer actually presses a button to override the building's various playlists in the event of a goal, but Collard points out that the software can be programmed to automatically recognize such variables as game score and time remaining. If a basketball team runs a promotion allowing fans to use their ticket as a next-day voucher toward free fast food every time the home team wins and scores at least 100 points, the software can be set up to send fourth-quarter messages to that effect based on what it reads from the scoreboard data.

A building with 400 screens serving dozens of different zones might have 250 separate playlists to manage, and a general rule of thumb puts one full-time person in charge of every 100 playlists. With programmable software, the staffing number can be zero, according to Collard. "You basically have a smart player," he says. "You attach metadata that describes your ads and you have rules built into the software, and it will automatically make the decision of what ads play when, at what time, based on whatever conditions are occurring. You just dump the ads in a bucket, and they will automatically play in the right place at the right time."

That said, the software also allows arena retailers to market on the fly. If a Raptors player posts a double-double on a given night, fan store operators can essentially hack into the system, access a messaging template and insert it into the playlist in time to tell exiting fans that the player's jersey is available at a special discount. 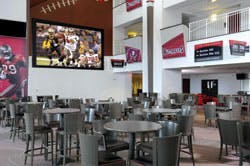 This season, MLSE is expanding its use of digital signage in the ACC concourse to include concessions areas. Menus and graphics are easily changed to reflect the vendors in a given location, and signs can alternate between promoting a menu item and providing its nutritional information (laws in some areas dictate that such information be just as legible as all other menu graphics).

"I believe the methodology that we used at the Air Canada Centre is the right one for every stadium across North America," Brown says. "If you put yourself through that process, you will end up where you need to be. The question becomes the design and the implementation of it, which now can go a hundred different ways. So it depends how far each individual stadium wants to go and how much money they've got to spend, because it ain't cheap to put these types of systems into a building."

There are alternatives to the ACC model, as scoreboard and signage manufacturers often include control software with their hardware packages to help end users monetize their facilities. "Our software is not only able to keep track of the number of times that an advertiser's content plays, but also the duration and at what point of the game it played - first, second, third quarter," says Rich Hintz, engineering manager for Brookings, S.D.-based display manufacturer Daktronics. "This is important for when sudden crowd prompts - 'Touchdown!' - are sent to the display and interrupt the advertisement that was playing. Not only does the control system keep track of when this happens, but it can be set up so that when the crowd prompt is done playing, the advertisement that was playing will pick up where it left off, ensuring that the advertiser gets the appropriate amount of time."

At the hardware level, LCD video displays function much like a flat-screen TV. However, these monitors are designed to run for longer periods of time and can be tiled together to form large-scale, high-impact imagery. They must also stand up to potential physical contact. A display that reaches the concourse floor at the Rose Garden in Portland, Ore., allows fans to compare their heights to a variety of Trail Blazers. The displays are thinner than most to meet ADA requirements for wall protrusions, and to prevent fans from scratching or besmirching the LCD screens, they are fortified with an extra layer of bonded glass and a fingerprint-resistant coating. "We're designing and manufacturing specific features in products that enable more of those types of applications," says John Dixon, product marketing manager for Planar, which manufactures LCD monitors and touch screens from its headquarters in Beaverton, Ore. "We're ruggedizing video wall displays so they can be put in places where the public can actually go up and touch them."

Planar broke into the sports market six years ago with LCD scorer's tables, which replaced the standard static and scrolling signage that often fronted them (and still does in several NBA arenas). Used primarily for advertising to the television audience, the displays allow for exponential increases in ad revenue. Says Dixon, "You can shorten up the spots and sell more of them, because you're not limited to the length of the roll that's inside those acrylic displays." 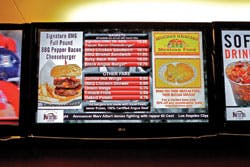 EASY TO DIGEST Digital signage simplifies the marketing of concessions items at the Rose Garden in Portland, Ore.

That concept holds just as true in the concourse as it does courtside. "When you shift over to digital signage, you now have time - not space - to deal with," Brown says. "And time is pretty plentiful when it comes to a sporting event. If you have a three- to four-hour window, and you're selling blocks of, ideally, seven- to 15-second spots, that's a lot of time to fill."

There's another product the Air Canada Centre concourses are selling: whatever event happens to be taking place there on a given night.

"We understood the priority was to give these sponsors space to hawk their wares, while the second one was fan enhancement - to make it a more interesting place for fans to come to," Brown says. "And how you achieve that with an advertising model is by forcing the advertisers - and you can force the advertisers - to design content that is meaningful, that is engaging, that fits in with the environment. Their content and designs match with what we're trying to achieve as the Leafs look or the Raptors look."

In addition, illuminated pillars located behind the Gate 1 Spectacle change from blue for Leafs games to red for Raptors games to white for concerts. This, combined with the ACC's transparent exterior, advertises to approaching fans exactly what is in the offing. "You are into the environment 200 feet away from the building until the time you leave," says Collard.

Can floor-to-ceiling, full-perimeter concourse displays be far off? No one can say for sure. "Somebody's going to come along and do something better, obviously, and they're going to improve upon it, I would hope," Brown says. "But the process that we put ourselves through? I can't see that not being the right process for anyone in the near future."