In 2003, the year Lincoln Financial Field opened, Philadelphia Eagles employees were given blue recycling bins to slide under their desks. 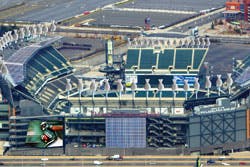 In 2003, the year Lincoln Financial Field opened, Philadelphia Eagles employees were given blue recycling bins to slide under their desks. By the end of the 2011-12 season, as many as 65 helical wind turbines will be perched atop the stadium rim. That's how far the Eagles' Go Green initiative has ascended.

When combined with solar energy, wind is projected to help meet a quarter of Lincoln Financial Field's energy needs. An onsite dual-fuel cogeneration plant will produce the balance. All told, the new infrastructure - to be installed, operated and maintained by Orlando, Fla.-based Solar Blue - will generate 7.6 kilowatts of energy, which according to director of event operations Leonard Bonocce is enough to power the stadium during each of the 30 to 35 events that see the seating bowl filled with spectators in a given year. The stadium will require a single kilowatt on most other days, an amount the wind turbines and solar panels should be able to produce in tandem. Solar Blue will then sell excess power back to PECO, the energy company serving southeastern Pennsylvania. PECO, in turn, can sell the power to homeowners in the region.

"People are really excited about it," Bonocce says. "This is the first stadium that we know of in the world that's doing something like this. We're able really to step right off the grid."

That's significant, in light of the fact that the Eagles paid a power bill of $400,000 for their first January at Lincoln Financial Field (in 2004). Under the new arrangement, power will still be a line item in the operations budget, but the team will pay Solar Blue an established rate that increases incrementally during each year of a 20-year contract. Without the partnership, the Eagles could expect to pay $100 million on power over the same two decades. With it, they will spend just $66 million. "That really shows you the impact that this deal will have," says Bonocce. "It's a business model that works for Solar Blue, and it's a model that really works for us, because from a utilities standpoint, we're able to predict our economic future."

That predictability became even more significant this year. Deregulation that took effect Jan. 1 meant Pennsylvania's power suppliers would no longer be beholden to rate caps. Says Jason Miller, the Eagles' director of facility management, "Anybody that purchases energy in the state is now at the mercy of the suppliers out there." 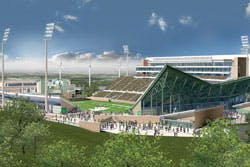 By generating their own energy, the Eagles will soon become an exception. And while wind turbines won't be the most productive of the stadium's energy-generating upgrades, they will be the most visible. And that visibility, particularly in a 68,000-seat venue, carries a power all its own. "These things have pretty large footprints; they're pretty high visibility," Bonocce says of sports stadiums. "They provide a platform to display technology in a way that a lot of people are going to see it in person and on national TV."

Ecological education is one reason the University of North Texas is installing three wind turbines in Eagle Point, a part of campus that includes a football stadium project designed by Dallas-based HKS Inc., as well as various athletic buildings, courts and fields. Standing 121 feet tall, the propeller-driven 100-kilowatt turbines are of a scale consistent with their surroundings, particularly when compared to the 400-foot megawatt models found on wind farms. That said, the UNT equipment will be hard to miss. "We're looking forward to having an icon we can point to - one that physically conveys that research and education are main components of why the stadium exists," says Todd Spinks, UNT's director of sustainability.

"There are other renewable energy systems out there, like geothermal ground-source heat pumps and photovoltaic panels high up on a roof, but you're never going to see them," says Chris Mundell, sustainable design coordinator at HKS. "This stadium is right at the intersection of I-35 east and west coming up from Dallas-Ft. Worth into Oklahoma. Anyone driving by will see these turbines and go, 'Wow, they're doing renewable energy there.' I think for an educational institution like this, these were a good choice in terms of visibility."

Providing the most energy savings for their $2 million cost (covered by a State Energy Conservation Office grant), the turbines were chosen over nine other renewable energy delivery options, including helical turbines mounted to stadium light poles. Energy generated will supply the entire Eagle Point grid, earning UNT LEED EA Credit 2, and offsetting the stadium's consumption by 6 percent - a modest figure compared to the 20 to 25 percent savings that might have been realized had the chosen turbines been plugged directly into the stadium, according to Mundell. Grants are currently being sought for the purchase of photovoltaic panels to be mounted on standing-seam stadium roofs already pitched to maximize PV efficiency.

As both the Philadelphia and North Texas stadium projects are being billed as among the first of their kind, it's difficult to predict to what extent future stadium planning will make room for renewable energy infrastructure. For those interested in getting into the conservation game, Bonocce offers three words of advice: measure, measure, measure. "We measure everything," he says, "and that foundation made it very easy to pull the data out, sit down and do a basic cost-benefit analysis of this project once Solar Blue approached us. It truly is a win-win-win. Solar Blue wins, we win and ultimately the environment wins."