Soccer isn't under wraps in Houston these days, but the Dynamo's new home is. 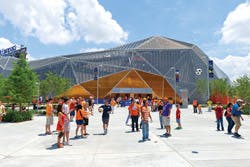 Soccer isn't under wraps in Houston these days, but the Dynamo's new home is. Dressing up the exterior of BBVA Compass Stadium with aluminum mesh panels applied in a triangular tessellated form, Kansas City, Mo.-based architects Populous hid the understructure of the seating bowl with a utilitarian material that is "muscular," its designers say, but nonetheless gives the venue a light and airy feel. Marking the entrances with panels of orange polycarbonate (ThermoclickTM from AmeriLux International LLC, fabricated by Duo-Gard of Canton, Mich.) aids in wayfinding and also gives the building an ephemeral quality - during the day, orange light shines inward, while at night, orange light glows outward. Budgetary concerns led the team to specify standard, off-the-shelf panels that are a shade lighter than La Naranja's orange team color, which is represented in the orange-painted cinderblock walls (visible on the right of the photo) fortifying the ancillary spaces that ring the stadium.