The Las Vegas Raiders will have a new home this season, as Allegiant Stadium celebrated its substantial completion date in late July. The $1.97 billion facility features 65,000 seats, a retractable natural grass playing surface, a seven-acre translucent ETFE roof and 1.8 million square feet of space. MANICA Architecture and HNTB Architecture partnered on the design. The facility will also host UNLV football and a variety of sporting and non-sporting events. 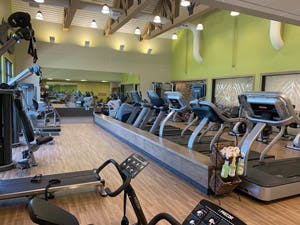 The City of Thornton (Colo.) recently dedicated its new Active Adult Center. The 26,000-square-foot facility, designed by Barker Rinker Seacat Architecture, doubles the size of the previous space and includes amenities such as a fitness studio, a group exercise classroom, a teaching kitchen, a technology room, a ceramics studio and library space.

Ashland (Ohio) University announced that it has raised the funds needed to build a new indoor athletics and activities center. The 125,000-square-foot Niss Athletic Center will include an 80-yard turf field, a 300-meter six-lane track and an eight-lane sprint track, as well as field jumping and throwing areas and batting cages. The facility will be utilized for events and by the university band. The project is expected to be completed in late spring 2021.

Shawnee County (Kan.) Parks and Recreation received approval from county commissioners to replace the gym floor at the Hillcrest Community Center. The project, supported by donations from K-State University, the Kansas Health Foundation and others, is expected to cost about $40,000.

The city of San Diego is reviewing developer proposals to redevelop the 48-acre Pechanga Arena site. One proposal calls for a mixed-use development, which would provide a $125 million update to the arena, as well as include a park, a 3,500-seat music venue, housing units and office and retail space, in addition to a 12,000-seat stadium for the United Soccer League's San Diego Loyal club. Another proposal calls for five acres of park space, housing units and retail space — but does not call for renovating the arena. The city will evaluate each plan and submit one to voters for approval.

Harris-Stowe State University, in partnership with the St. Louis Cardinals, broke ground in July on a $1.2 million renovation of Stars Park, which served as the home of the St. Louis Stars of the Negro National League from 1922-31. The Cardinals' charitable arm provided $1.1 million to support the renovation, which will include a baseball field, a softball field, new dugouts, enclosed press boxes, scoreboards and seating for 200 at the baseball field and 100 at the softball field.

The City of Kennesaw, Ga., and Kennesaw Parks and Recreation held a groundbreaking ceremony for the new Recreation Center at Adams Park. The project will be built in two phases and will ultimately result in a 42,000-square-foot facility featuring three basketball courts, a fitness room, a gymnastics room, meeting rooms and office space.

This article originally appeared in the September 2020 issue of Athletic Business with the title "Forward Progress." Athletic Business is a free magazine for professionals in the athletic, fitness and recreation industry. Click here to subscribe.