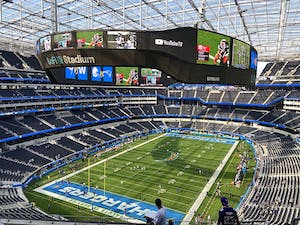 The recent investigation into the Washington Commanders’ workplace, as well as the NFL’s lackluster response, are at least part of the reason for newly introduced legislation that would eliminate a tax break for professional sports stadiums.

Reps. Jackie Speier (D-Calif.), Don Beyer (D-Va.) and Earl Blumenauer (D-Ore.) -- introduced a bill on Tuesday that would immediately eliminate a tax break used by professional sports teams. They labeled the bill the "No Tax Subsidies for Stadiums Act."

“The NFL has proven once again that it can’t play by the rules. As such, taxpayers-subsidized municipal bonds should no longer be a reward for the Washington Commanders and other teams that continue to operate workplaces that are dens of sexual harassment and sexual abuse,” Rep. Speier said. “There is no reason why these teams—the average of which went up in value to $3.48 billion in 2021, according to Forbes—should have American taxpayers footing any of their bills. It doesn’t make economic sense, and it’s particularly galling given the league’s longstanding failure to address issues of sexual harassment and sexual assault as well as on-going racial and gender discrimination and domestic violence.

“This issue comes down to communities being held hostage. The NFL and these other sports leagues are a money-making machine that are rich enough to build their own facilities, and we don’t need to divert much-needed public funding to these projects. Let’s instead focus on spending our tax dollars on creating communities where all of our families can thrive,” Rep. Blumenauer said.

Earl Ash, deputy director of Public Policy for Sports Fans Coalition said taxpayers should not being footing the bill for multi-billion-dollar stadiums.

“Sports Fans Coalition wholeheartedly supports the No Tax Subsidies for Stadiums Act,” Ash said in a statement. “There is no reason why a Montana sports fan should have to fund a sports stadium two states away, let alone any taxpayer subsidize a stadium anywhere. We commend Representatives Speier (D CA-14) and Blumenauer (D OR-3) for their leadership and standing up for sports fans across the country."