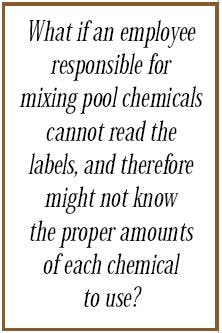 Analysis of the Americans with Disabilities Act has produced both court opinions and popular opinion, but the landmark legislation still seems to raise more questions than answers. If you boil down the hundreds of court decisions and newspaper and magazine articles written in the past several years, you're left with something akin to the Biblical adage: "Do unto others as you would have them do unto you." If you act in a reasonable manner, you have a better chance of passing judicial muster.

Reasonableness, though, is a concept open to interpretation.

For example, in 1999, the U.S. Supreme Court concluded in two cases that the effects of mitigating measures, such as the use of eyeglasses or medicine, must be analyzed when trying to determine whether an individual is substantially limited in a major life activity. Pursuant to the ADA, employers are prohibited from discriminating against a qualified individual with a disability (defined as a physical or mental impairment that substantially limits one or more of the individual's major life activities). The Supreme Court decisions basically held that while someone might be covered under the ADA, the person loses that status if he or she can correct the disabling condition.

Besides losing protected status, the person could also lose his or her job if he or she can't meet the job's basic requirements.

In one of these cases, Sutton and Hinton v. United Air Lines Inc. [119 S.CT.2139 (1999)], an airline company terminated the interviews of two nearsighted pilots because they did not meet the company's vision requirements. Without mitigating measures, the pilots could not see well enough to engage in numerous daily activities, such as driving and watching television. However, the pilots' impairment could be corrected with glasses or contact lenses.

In their suit under the ADA, the pilots asserted two theories in support of their argument that they were disabled. First, the pilots claimed their myopia was an actual disability. In the alternative, the pilots claimed the company regarded their myopia as a disability. The company argued, and the Supreme Court agreed, that the pilots were not disabled under the ADA because they were not substantially limited in a major life activity when they wore glasses or contact lenses.

Few phrases strike as much fear in the human heart as "nearsighted airline pilot," but even the realm of recreation can offer up similar lifeor- death situations. A nearsighted person might have difficulty watching television without eyeglasses; she also might have a hard time seeing swimmers were she to work as a lifeguard. Guided by the court's decision in Sutton, a pool operator seeking to hire a lifeguard can, in the interest of safety, require all lifeguards to have 20/20 vision, even though visually impaired applicants could wear corrective lenses to mitigate their impairment.

In Sutton, the rule specified the need for applicants to have 20/20 vision without corrective assistance. The applicants were initially found to be impaired and covered under the ADA, but the Supreme Court concluded that once corrective lenses fix the vision impairment, the applicant is no longer covered by the ADA.

To take the water-safety example a step further: Because proper risk-management procedures are so vital to public beach operation, the vision rule could be considered a Bona Fide Occupational Qualification. A BFOQ would allow an employer to exclude a candidate if the vision rule were designed to guarantee that lifeguards can perform their job properly without increasing the harm of injury to themselves or others. For example, a lifeguard involved in a rescue whose contact lenses are flushed from his or her eyes might not be able to see the shore, putting both the lifeguard and the person being rescued in serious danger.

The risk of injury to oneself or another person is a major defense in any ADA case. A court will allow an employer to exclude an applicant or to terminate an employee with a disability if that person poses a threat to him- or herself, or to others, by working at the job. Such a rule is not without exceptions, as the courts will consider whether there exists alternate means to allow a person to perform his or her job.

Consider, for example, a school employee responsible for pool sanitization who must, in the day-to-day performance of the job, handle a variety of chemicals. Many administrators would assume this is a basic task that does not require significant experience or intelligence. However, what if the employee responsible for mixing pool chemicals cannot read the labels, and therefore might not know the proper amounts of each chemical to use? Can the employee be terminated because he or she poses a risk to others, as well as to him- or herself?

The first issue that needs to be determined is whether the employee is covered by the ADA. While not being able to read is a limitation on a major life activity, it might be difficult for an employer to obtain certain knowledge necessary to make any ADA-required changes. If the employee is dyslexic or has a learning disability, he or she is covered under the ADA; unfortunately, the employer can only ask for a doctor's note or medical records if the employee asks for accommodations.

An employer must also determine whether reasonable accommodations might be made to permit the person to remain on the job. The employer may, for instance, tab someone else to mix the chemicals, or send the employee to a remedial reading class-in either case, lessening the potential for risk. Most courts would consider such actions as not overly burdensome on an employer, and would find them to constitute reasonable accommodations.

The above examples highlight one truism for ADA compliance. While the law still has some kinks that need to be worked out, reasonableness is still the guiding factor. If decisions are made that appear reasonable to a facility operator, he or she will have a strong foundation for his or her actions if others would also consider them reasonable. Thus, reasonableness might be the theme that can be extracted from the ADA, even when its application might not seem to be entirely fair.