A Different Line of Questioning Must Greet Résumé-Free Job Candidates 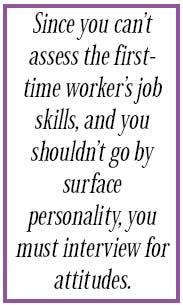 So, tell me about some of your previous work experiences."

"What are your responsibilities at your current job?"

"Describe a situation in which you solved a tough problem for a customer."

These are all great opening gambits when interviewing candidates for an entry-level job. Seasoned interviewers know that a candidate's previous on-the-job achievements are the best predictors of his or her future success.

Which is what makes it so difficult to evaluate a young, wet-behind-the-ears applicant - the person who responds to that first inquiry with, "I've never held a job before." It's an increasingly common situation in this age of shrinking labor pools, with employers everywhere forced to fill positions with individuals - recent high school and college graduates, usually - who are new to the world of work.

While many newbies come equipped with the organizational and people skills necessary to thrive in a club environment, employers face a certain amount of risk in hiring untested workers. The hard reality is that some workers lacking a track record may end up being problem workers, coming in late, performing poorly and treating customers shabbily. Their bad attitude will get them fired eventually, but not before costing you the time and energy spent hiring and training them - not to mention the goodwill of your members.

"There are really two costs of a bad hire," says Francis J. Friedman, president of the New York-based consulting firm Time & Place Strategies. "The first is the cost of the hire itself. The second can be greater: the opportunity cost of not hiring someone else who would have contributed to your profits."

When faced with inexperienced candidates, most interviewers try to assess verbal skills and personality. Unfortunately, that's not necessarily a recipe for success. "Verbal skills don't magically develop into workplace abilities," warns Mel Kleiman, president of Humetrics, a Houston-based consultancy that helps businesses make hiring decisions. "Many people are articulate, friendly and outgoing. That's wonderful. But you are hiring employees, not friends."

Kleiman suggests that since you can't assess the first-time worker's job skills, and you shouldn't go by surface personality, you must interview for attitudes. That means you must assess individuals' perspectives toward the world of work. Will they pitch in and help when the opportunity arises? Will they assume leadership positions? Will they take pride in being on time? Will they go above and beyond the requirements of the position?

Many questions will conjure up the truth about attitudes:

• "Tell me about the very first job for which you got paid." Wait a second - isn't it true that this applicant has never held down a job before? Yes, but the average young person spends from $25 to $50 a week. Has that money been given to him or her by doting parents, or has he or she earned it?

When you ask how the applicant earns money you may get answers such as, "I baby-sat," "I cut lawns," "I delivered newspapers," or even "I was paid for good grades." You are looking for evidence that this person has developed good work habits, and the resultant attitude that money must be earned.

• "Did you have chores around the house?" Here is a good follow-up question. Once again, a detailed response will indicate the individual has developed the attitude that work responsibilities are important.

• "What is the hardest thing you ever did?" Look for evidence that the applicant has devoted great effort to some task or has done some part-time or temporary work to earn money. This will reflect good attitudes toward hard work and perseverance.

• "What is your definition of being on time?" This may seem like a dumb question, but when you hear some answers you may change your mind. Watch for responses that devalue promptness. Here's an example: "If I get in, like, inside of a half hour after I am asked to arrive, then I've been told I'm doing OK."

• "How many times have you been late to school in the last six months?" The idea once again is to assess attitudes toward punctuality.

• "Tell me about your school experience. What courses did you like and dislike?" The actual courses cited as "most liked" are less important than the individual's attitudes toward school, which represents work. You are seeking individuals who took their schooling seriously.

• "Have you ever planned a party? What was your role?" Ask questions such as this to elicit information about the individual's attitude toward taking responsibility.

• "I'd like the names and phone numbers of several of your teachers [or friends or relatives]. When I call them, what will they tell me about you?"

These questions can bring out the truth about attitudes that would otherwise remain hidden. Applicants realize it is better for them to reveal information rather than have you hear it from a third party. You may hear, "My teacher, Mr. Brown, may tell you that I was usually late handing in my assignments."

Following the interview, call the individuals whose names and numbers have been given you. These individuals are great sources of information about the applicant's attitudes. "In particular, grandmothers don't lie," says Kleiman. "Ask Grandma to tell you about Tiffany and you may hear something like: 'I'm so glad Tiff is looking for work - she needs to do something more constructive than hang out at the mall.' "

After you have asked your questions, tell applicants what you expect of them should they be hired. Since these people have never held a job before, you can take nothing for granted concerning their work habits. "Explain your work rules," says Kleiman. "Employees must arrive on time. They must be willing to do more than what is in their job description. They must show initiative in helping customers. Give the reasons why you hire and fire individuals."

Screening first-timers is tricky, but it doesn't have to be a crapshoot. By trying to find out what makes candidates tick, you'll increase your odds of finding employees who'll meet and even exceed your expectations.