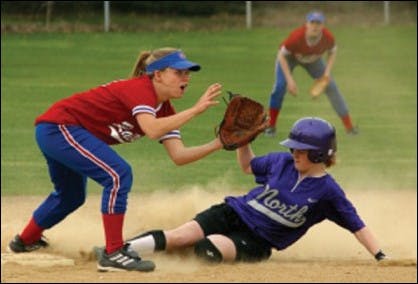 Because there are certain risks inherent in every activity, it is impossible for sport and recreation administrators to ensure the safety of every activity participant. As a result, in order to protect themselves and their organizations against lawsuits, it is essential that administrators transfer the risk of injury to another party. One way to do this is through "assumption of risk." Under this theory, if a person (1) has knowledge of the risk of danger, (2) appreciates that risk and (3) voluntarily exposes him- or herself to it, either expressly or in an implied manner, then he or she cannot later sue for damages incurred from exposure to that risk.

A recent example of how assumption-of-risk doctrine protects administrators - and especially coaches - is Kelly v. McCarrick [841 A.2d 869 (Md. 2004)]. Tara Kelly was a second baseman for the St. Mark's Parish 7th and 8th grade Catholic Youth Organization (CYO) softball team. At 13 years old, Tara loved playing sports, had played CYO softball before and knew the rules of softball - including that, to make an out, she had to tag runners with the ball.

During a league game, Tara fractured her ankle when a player on the other team slid into her as she made the tag. At the time of the injury, Tara's foot was positioned on the back corner of the stationary base, which was anchored with a stake in the ground. Tara's injury was immediately identified as serious and she was carried from the field. Tara's mother, Terry Kelly, refused the coaching staff's request to wait for an ambulance, and in an effort to get Tara to the hospital as quickly as possible, transported Tara to the emergency room in her car.

As a result of her injuries, the Kellys filed a negligence lawsuit against St. Mark's Parish, St. Joseph's Parish, the Catholic Archdiocese of Washington, D.C., and the CYO, arguing that the defendants failed to:

• train players and coaches how to safely play softball, • ensure that Tara's team was not scheduled to play against teams with more-skilled players, • equip the field with breakaway bases that may have prevented Tara's injury, and • ensure that coaches and volunteers were trained to handle emergencies involving game injuries.

In ruling for the defendants' assumption-of-risk defense, the trial court concluded that "a person of normal intelligence, in a similar position, would clearly have comprehended the danger" in tagging out a sliding base runner. Citing Tara's four years in softball and her "normal intelligence," the court held that contact between a runner and the base defender is an obvious and foreseeable risk incidental to the game of softball.

On appeal, the Kellys argued that while it is true that all softball players accept the risks that are intrinsic in the sport of softball, they do not assume all the risks of injury simply by participating in a game. In particular, the Kellys argued that softball players do not assume the risk of injury associated with a coach's failure to adequately instruct players, failure to match players of similar skill or failure to use (presumably) safer breakaway bases.

In rejecting the Kellys' first argument, the court ruled that there was no reason that assumption-of-risk principles applicable to negligent-play claims should not also apply to negligent-coaching claims. In particular, the court, agreeing with Kahn v. East Side Union High Sch. Dist. [31 Cal. 4th 990, 4 Cal. Rptr. 3d 103, 75 P.3d 30, 32 (Cal. 2003)] held that "the same general standard should apply in cases in which an instructor's alleged liability rests primarily on a claim that he or she … failed to provide adequate instruction or supervision before directing or permitting a student to perform a particular maneuver that has resulted in injury to the student." [See "Pushed Too Far." Dec. 2003, p. 20.]

The court also cited a leading assumption-of-sports-risk case by the New York Court of Appeals, Turcotte v. Fell [68 N.Y.2d 432, 502 N.E.2d 964, 968, 510 N.Y.S.2d 49 (N.Y. 1986)], which held that the limited duty of those involved in sporting events was simply to make the conditions as safe as they appear to be. If the risks of the activity are perfectly obvious, this court said, the plaintiff is believed to have consented to them and the defendant has performed its duty.

In practice, the court in Kelly noted that the liability of coaches and athletic leagues has been restricted to instances in which the alleged misconduct not only directly resulted in injury, but also reflected an unusual disregard for a player's well-being. Therefore, when evaluating whether an athlete assumed risks attributable to coaching, the courts have given substantial weight to the dangers of the sport and the plaintiff's knowledge and experience in the sport. For example, in Balthazor v. Little League Baseball Inc. [62 Cal. App. 4th 47, 72 Cal.Rptr.2d 337, 340-41 (Cal. Ct. App. 1998)], a California appellate court held that a baseball league did not have a duty to decrease the inherent baseball risk of being hit by a wild pitch. The court concluded that the league had not increased the inherent risk of harm by failing to end the game as sunset approached, or by failing to remove a pitcher who had previously hit batters. Changes in lighting conditions, the court ruled, are inherent to the game and requiring pitching accuracy would "alter the fundamental nature of the game and most certainly chill vigorous participation."

In this case, the appeals court agreed that Tara and her parents understood the risks associated with softball, including the dangers associated with stationary bases. Also, given the obvious danger involved in the tag play, the court held that if Tara needed further instruction on the "rules of softball" pertaining to it, she could and should have asked questions before taking the field. The only duty coaches generally have is to "instruct and train their players with respect to the fundamentals of the particular sport," including teaching rules and skills necessary to the game, as well as methods to reduce the risk of injury. While they may not be held liable for failing to decrease risks inherent in the game, coaches can be held liable for increasing the inherent danger of a sport.

Another important factor in the court's decision was that Tara's injury did not result from an analogous lack of instruction or training. Tara was not injured during the type of specially designed practice drill that the Kellys might not have anticipated, or because she was required to perform a risky play for the first time, without prior notice or training. To the contrary, she was hurt during a routine play that the Kellys knew to be a potentially dangerous but integral part of the game.

As the court held, "coaches and leagues are not insurers of athletic prowess; they cannot be expected to train players in a manner that eliminates all dangers created by misplay, whether that misplay is caused by a young athlete's physical error or by her mental error." Therefore, "the risks associated with learning [emphasis theirs] a sport may themselves be inherent risks of the sport."

While this decision does not mean that a coach can't be held liable in some circumstances for negligently failing to give safety instruction and training, it does reinforce the principle that participants assume the risk of negligent coaching, as well as risks on the base paths.

Attorney John T. Wolohan (jwolohan@ ithaca.edu) is an associate professor of sports law and chair of the Department of Sport Management & Media at Ithaca College.