Rec Agencies Keep Revenue Flowing Even as Employees are Furloughed

Agencies are expected to keep revenue streams flowing even as they are ordered to furlough employees. 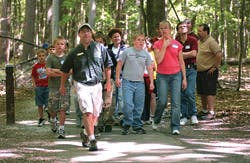 Photo of a park employee leading a group

Buildings, you can close. Parks, trails and other open outdoor recreation spaces and facilities, you generally can't. That discrepancy is the root of a host of problems that sprout up when parks and recreation employees are forced to take mandatory, unpaid time off work.

Most often justified as the lesser of two cost-saving evils (layoffs being the other), furloughs have swept the public sector, from agencies as large as the state of California (population: 36 million) to as small as the town of Hayden, Colo. (population: 1,634). No matter their size, parks and rec departments forced by their governing bodies (Arnold Schwarzenegger's or otherwise) to implement furloughs need to plan how to keep their parks and facilities staffed, lest they lose much-needed revenue from fee-paying visitors.

"Some other cities and counties we've noticed just select a day and close down," says Preeti Shridhar, communications director for the Seattle suburb of Renton, Wash., which is trying to balance its budget by enforcing three furlough days this year for its non-union employees. "For parks and recreation, we needed a much more elaborate process. We had to identify those core external services, and work around those furlough days so those services would not be compromised."

To try to bridge a statewide budget shortfall that in February was estimated at approximately $42 million, California demanded that state employees take the first and third Fridays of each month without pay (a 9.23 percent salary reduction) through June 2010. As of early July, the Governor's office was still grappling with an estimated $24 million shortfall, and a third furlough day was being considered.

California State Parks' field divisions (parks, for example, or other facilities that would normally be open on holidays, as opposed to department headquarters or district offices) were given the special status of being "self-directed," meaning the two furlough days per employee are still required, but their scheduling is at the discretion of individual state parks managers, in order to keep parks and other revenue-generating recreation facilities open.

"The design here is to keep parks open and revenue flowing," California State Parks spokesman Roy Stearns told the Marin Independent Journal, "because not to do that just compounds the problem."

In Renton, parks and rec officials worked with the city's human resources department to schedule furloughs around special events or times in which park usage typically peaks, such as the city's annual Independence Day fireworks display. "We are trying to minimize the immediate impact to our residents during those times we know people like to enjoy their parks and recreation activities," she says.

In Michigan, the governor's office directed all state employees - with the exception of "institutional workers" such as prison staff - to take six furlough days this summer. As with California, the Michigan Department of Natural Resources was given special scheduling flexibility in order to keep parks operating. "Seventy percent of our budget comes from user fees," says DNR public information officer Mary Dettloff. "We depend on people coming to our parks and paying to support the very operation of those parks. In Michigan, we get no general tax support from the Legislature."

Dettloff adds that maintaining appropriate levels of customer service was the guiding principle as the state's human resources division sat down with DNR department heads to devise a parks-specific strategy. "The last thing we want to do is inconvenience the public," she says. "There may be some minor blips - like trash not getting picked up one day, or maybe a phone isn't answered as quickly as it can be - but we rely on the revenue we're bringing in at the entrances. We don't want to turn people off to coming to our parks."

Even if a recreation department can collectively execute a furlough program without dramatically diminishing services, individual employees are not likely to relish the arrangement. Of the 170 city hall, public works and parks and recreation employees in Kingston, N.Y., asked by mayor James Sottile to participate in volunteer furloughs, only 10 raised their hands, according to Daily Freeman reports. "I think it's just a sign of the times," Kingston alderwoman Ann Marie DiBella told the paper in June. "People have not taken advantage of this situation because the economy is in such disarray, people want every penny they can get."

Workplace morale notwithstanding, most government agencies and their employees can agree that making, say, 10 percent fewer pennies is better than making no pennies at all. In May, Chicago park district superintendent Tim Mitchell told the Chicago Tribune that he was approaching unions representing parks workers to request that workers take as many as 16 furlough days in 2010 in order to make up for an estimated $15 million drop in corporate income tax revenue. "We're doing everything possible not to lay off employees," he said.

Michigan's Dettloff says DNR employees understand that they are not alone in having to sacrifice a sizeable portion of their paycheck. "We try to be team players," she says. "We've been operating in the DNR with shortages in many of our divisions for a long time, so we're used to having to make due with fewer hands doing the work."