Charitable immunity helps a Virginia nonprofit survive the challenge of an injured volunteer. 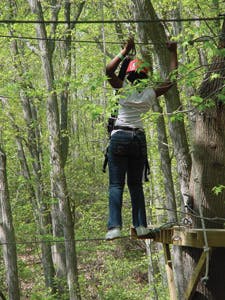 States aren't as charitable to charitable institutions as they used to be. Until 1939, the legal doctrine of charitable immunity universally shielded such organizations from ordinary tort liability because of the work they do that benefits the general public. However, evolving recognition of the prevalence of child sexual abuse and medical malpractice led most states to repeal or modify charitable immunity laws.

Virginia, among the states that retain some form of the immunity, was the location of a recent case, Kuykendall v. Young Life [2008 U.S. App. LEXIS 413], which provides a demonstration of the defense and how it can ably protect charitable organizations in some jurisdictions.

Young Life, a nonprofit corporation, owns and operates the Rockbridge Alum Springs Young Life Camp in Rockbridge County, Va. The camp includes a high ropes course that consists of two cables, one above (a safety cable to which the user's harness is clipped) and one below (upon which the user walks). The cables are permanently wrapped around trees, and secured with strand vises and, as a backup, cable clamps. Excess cable extending beyond the clamps is secured by means of a serving sleeve, which is intended only to keep the end of the excess cable snug against the main cable, not to bear weight. The course was constructed by an outside organization, Inner Quest, and followed the standards set by the Association for Challenge Course Technology (ACCT).

Young Life staffs its course with trained facilitators and volunteer leaders. One of the volunteers at the camp was Jeffrey Kuykendall. Although it was his first time on the Rockbridge course, Kuykendall had been trained on and served as a supervisor on other Young Life courses. This preparation required him to, among other things, negotiate the entire ropes course, check the tightness of bolts and trim branches that had grown on the course. Young Life also gives all facilitators between 24 and 30 hours of training before they are responsible for supervising volunteer leaders and campers. Prior to allowing anyone on the course, all course users are instructed on the protocol for proper safety clipping instruction. Course users are regularly instructed to "clip to the red" - Young Life marks each end of the weight-bearing cables with markers encircled with red tape - in order to avoid clipping to excess (non-weight-bearing) cable, and facilitators actually demonstrate where and how to clip properly. (Although, confusingly, the serving sleeve holding the excess cable was marked with red tape.) According to Young Life policies, supervisors are also supposed to ascertain the experience level of staff and to accompany them on the course to their respective supervision stations.

On July 4, 2003, Kuykendall was at the camp serving as a volunteer leader on the course, supervised (in the absence of the course manager) by the facilitator on duty, Bernard Newton. Although Newton did not ascertain Kuykendall's skill level before allowing him to enter the course, he did provide Kuykendall with safety instructions that explained proper techniques for clipping and negotiating that particular course. (Again, confusingly, Newton specified that volunteer leaders clip "between the reds" to ensure that they were attached to the safest portion of the cable.)

Contrary to Young Life's policy, however, Newton did not accompany Kuykendall to his assigned position to see that he clipped in properly. Instead, Newton directed Kuykendall to his station from the ground. At Kuykendall's station, the excess cable had apparently loosened from the serving sleeve, leaving enough space between the two cables for him to clip to one or the other, instead of around both; Kuykendall mistakenly clipped to the excess cable only, and fell nearly 35 feet to the ground.

As a result of his fall, Kuykendall sustained serious injuries, necessitating surgery on his back and wrists, as well as extensive rehabilitation. He then sued Young Life for $2.5 million in damages, claiming that the organization's cumulative acts of simple (or ordinary) negligence amounted to gross negligence or willful and wanton negligence. (Virginia recognizes all three types of negligence.) Although the district court agreed that a series of negligent acts could amount to gross negligence, the court stated that it would only rule accordingly if Young Life were found to have been indifferent or apathetic to Kuykendall's safety. Having determined that the evidence could only support a finding of simple negligence, at most, the district court granted Young Life its motion for summary judgment.

Kuykendall appealed to the United States Court of Appeals for the Fourth Circuit, which began by stating that under Virginia's charitable immunity doctrine, a charitable institution is only immune from liability for the negligence of its employees when it has exercised ordinary due care. Therefore, the court of appeals held, the only way Kuykendall could recover for his injuries is if he could show that Young Life was liable for gross negligence or willful and wanton negligence.

The court defined gross negligence as showing an utter disregard of prudence that amounts to a complete neglect of a person's safety. This sort of negligence would "shock fair-minded persons," although not reaching the level of willful and wanton negligence (which it defined as acting consciously in disregard of another person's rights or acting with reckless indifference to the consequences, with the defendant aware, from his knowledge of existing circumstances and conditions, that his conduct probably would cause injury to another).

Among the negligent acts specified by Kuykendall were Young Life's failure to remedy a known latent defect in the ropes course, expressly inform Kuykendall that a gap had formed between the excess cable and the main cable, and take reasonable precautions to discover the gap between the cables at Kuykendall's station. In addition, Kuykendall charged that under the circumstances the "clip to the red" policy was misleading, and that Newton improperly watched him from the ground. According to Kuykendall, these acts and omissions added up to gross negligence on Young Life's part.

In rejecting this argument, the court held that on the day of the injury, neither Newton nor the course manager had any notice of the gap between the cables. Nor did they understand the potential danger of such a gap before the accident. Thus, the court held there was no evidence that Young Life recognized and deliberately ignored the condition, leading to Kuykendall's fall. In addition, the court ruled that the evidence showed that Young Life had made numerous efforts to maintain the safety of the ropes course itself through regular inspections, and the safety of those using the course through the assistance of trained staff. For example, prior to the summer camp season, certified inspectors had conducted both annual and monthly inspections of the ropes course. Thereafter, facilitators and supporting volunteers completed daily visual inspections.

Therefore, even though in hindsight it seems clear that Young Life should have done more to prevent Kuykendall's fall, the appeals court concluded that the standard for gross negligence is one of indifference, not inadequacy. Under this test, it would be impossible for a reasonable jury to find that Young Life's conduct showed indifference to Kuykendall and utter disregard for his safety.

While the decision in Kuykendall v. Young Life may only apply to Virginia and the small number of states that still allow charitable immunity, the case is nonetheless important because it shows how valuable the defense can be.

Absent the state's recognition of the doctrine, Kuykendall would only have had to show simple negligence, which the facts suggest he would have easily been able to do. However, forced to prove a higher standard, Kuykendall was unable to establish gross negligence and failed to recover any damages. The charitable immunity doctrine thus helped save Young Life from having to pay any, if not all, of the $2.5 million sought by the plaintiff.