New owners of established clubs should resist the urge to put their stamp on the business. 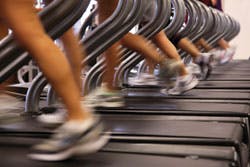 TREAD LIGHTLY Wary club members may bail if too many changes are in the offing.

The rags-to-riches story is a deeply ingrained part of health club lore. Its protagonist is the fitness floor manager or personal trainer, coming to work every morning but all the while imagining one day owning his or her own club or studio. His first fitness center is cramped, with no frills - a leased space filled with leased equipment, perhaps - but if the story ever gets made into a screenplay, the onetime personal trainer ends up the owner of a health-club empire.

You'd be surprised. There's actually a healthy resale market for club properties - from those that include a building and real estate to those that are leased. Have $3.5 million of a bank's money to spend? A couple of months ago, $3.5 million could have gotten you an established Boulder, Colo., club and the land it sits on, with all its staff and equipment in place. A more affordable option, an independent 24-hour club in eastern South Dakota, was still for sale as of this writing for $298,000. Such opportunities are not as common as sales of Curves franchises (current asking prices range from $19,000 in Ohio to $69,000 in New Jersey), but they're out there.

"It's just like any business; people sell for lots of reasons besides distress," says Guy Coffey, co-founder of The Coffey Owens Group, a Denver-based business brokerage firm specializing in the sale of health clubs. "Sometimes it's family issues, sometimes it's partnership issues, sometimes they decide to move on to other things. I've got one client - a club owned by four different guys living in two different states who've been partners for 11 years - they have an amazing club, but they're all at different phases of their life. The situation is so common. One has little kids, one has grown kids, one is divorced. One is thinking, 'We got a good ride out of this, made some money, let's move on.' Some owners retire. And for others, they're too young to retire, the money's coming in - but maybe the passion is gone."

Few businesses are profitable from day one. The primary benefit of buying an existing club is that you're starting on day 4,015, say. This particular club has an 11-year track record; the price you paid was based on existing accounts receivables, and in many such cases the purchase price is adjusted downward depending on how many memberships don't renew in the immediate aftermath of the sale. If the club you've bought was profitable, it likely will remain profitable - after all, that's why your bank gave you the money to buy it.

That's also why brokers typically gravitate toward profitable clubs and away from distressed ones. As Coffey's business partner, Russell Owens, says, "There are always lots of buyers and lots of sellers, but the clubs we work with are being sold for the right reasons. The people in that position have a lot of experience in the club industry, and they have business models that have proven to work."

Purchasers of these kinds of clubs might blanch at the hefty price tag, but they're buying a lot of advantages, beginning with the positive cash flow. They are taking advantage of someone else's business acumen in having negotiated an advantageous building lease (only 20 percent of Coffey Owens Group's club deals involve the sale of real estate) and hired a professional staff, and they're inheriting, presumably, a well-known brand and accrued goodwill in the community.

How can the new owner screw this up? The answer is fairly obvious. A new owner who has bought into a business at the start of year 12 isn't creating the club he dreamed about when he was punching the clock for someone else. He owns it, but it's not really his. The members are wary of him, of the changes that might be in the offing. He, meanwhile, is just busting to put his own stamp on the place. He may be able to see more clearly than the former owners just what needs to change for the club to be even more profitable.

The new owner should resist this urge, Coffey says. "The main recommendation we make to purchasers is, you're buying a profitable club, and it takes three to six months to find out what really is - in your opinion - wrong or to decide that something can be improved," he says. "Sometimes people want to make all these changes immediately, and they don't really know why the business is set up the way it is. Once they spend some time in the club they'll find out, 'Oh, that's why they never converted that room to a group-ex room.' We always recommend a 90-day moratorium on changes."

Coffey's cautionary tale involves an extremely profitable Southern California club that had been in existence for more than 15 years, with much of its ancillary income derived from personal training. The new owners made one initial minor misstep - day-glo flyers plastered on bodybuilders' mirrors trumpeting a new class offering and featuring a photo of the owners holding their dog - and, after that, one huge mistake.

"People didn't care about the class, and didn't want stuff on their mirrors - that had been a member complaint in the past, and the new owners didn't know it," Coffey says. "Then they turned around and fired the personal training manager, who had been there eight years, and put a family member in his place. They spent almost $2 million to buy the club because it cash-flowed so well with all its personal training, and PT went from high five digits to almost nothing." Among the don'ts Coffey lists - killing a longtime program, discontinuing services, making changes in employee compensation - taking out a well-liked employee is by far the worst. "That's a bomb there," he says. "Clearly, it's the purchaser's clientele to lose. Hopefully, they don't."