One on One: Sports Psychiatrist Michael Liebowitz Tackles Athlete Anxiety 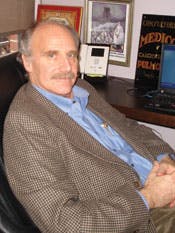 What made Zack Greinke's 2009 American League Cy Young Award noteworthy, other than he won it while pitching for the Kansas City Royals, was that three short years ago the prodigious talent was ready to give up the game for good. Greinke has social anxiety disorder - defined as a persistent fear of being judged by others and potentially humiliated by one's own actions. And he isn't alone. Last season, at least three additional Major League Baseball players spent time on the disabled list with the disorder. Columbia University psychiatrist Michael Liebowitz is credited with helping raise social anxiety disorder's profile, beginning with research conducted in the mid-1980s. He has also prescribed medication to unnamed "major athletes" looking to control their anxiety in advance of major competitions. Paul Steinbach asked Liebowitz to take us inside the mind of the anxious athlete.

Q: Is there much difference between a Little Leaguer - playing in front of a few dozen parents and praying that the ball isn't hit to him - and Zack Greinke, looked upon by 20,000 fans to carry his team?
A: I think it's exactly the same. We are wired as a social species to have those kinds of impulses, to be enormously concerned with what people around us think of us. And part of it is a healthy motivation. But when it gets to be too much of an extreme, it becomes paralyzing. That fear of fielding a fly ball makes one less coordinated and less likely to catch the ball if it does get hit. Adrenaline is like a curve - too little, you're flat; too much, you're wired.

Q: Are there side effects to treating athletes' anxiety with medication?
A: One guy told me that, in fact, it helped his tremor, but it limited his endurance a little bit. He couldn't get his heart rate up high enough, because it lowered that, too. There are non-medication treatments. Cognitive behavior therapy tries to get people to articulate what their fears are and find out that they're irrational. It works fairly well.

Q: Is fear of failure in front of 20,000 fans entirely irrational?
A: There's a difference between a pitcher who gets behind and digs in deeper and another guy who says, "Oh, my God, I'm going to fail," and he starts falling apart. It gets magnified irrationally: "I'm not a good pitcher. I don't have any skills. I'm a failure." Performance anxiety is a sort of negative feedback loop. Say you're giving a speech and you're a little nervous up there, and somebody starts to yawn. You start thinking, "Oh, my God, they don't like my speech." That makes you more nervous, more physically shaky. "Are they going to see me shake?" It generates more anxiety. It feeds on itself, and that's when people get into trouble. Both the medications and the therapy try to teach people how to short-circuit that so it's back under control.

Q: Can we all relate on some level?
A: Public speaking anxiety is the single most prevalent phobia in the United States. More people are afraid of public speaking than are afraid of dying, so actually a lot of people would rather be in the coffin than giving the eulogy. Many people just build their lives to not be too social or to not put themselves in front of an audience. They live their lives, and it's no big deal. If you have a guy who's a talented ballplayer who has to get out in front of 20,000 people, it can become a problem.