A high school P.E. class gets a no-pressure introduction to Gold's Gym. 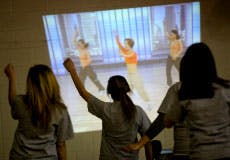 Lisa Sink-Morris was looking to provide added value for sophomores taking her aerobics and dance physical education class at Roanoke, Va.'s Hidden Valley High School. So the teacher called on longtime friend Donna Wright, group exercise manager at Gold's Gym in Roanoke County. Together, the former high school classmates developed a partnership in which Wright teaches one P.E. session per semester at the school (most recently, it was a step aerobics class), and Sink-Morris' students travel five miles in a school activities bus to Gold's, where they are treated to a free tour and one of Wright's group exercise sessions. Twenty kids participated in a BODYPUMPâ ¢ class last fall and then enjoyed complimentary smoothies, courtesy of an anonymous club member who was impressed enough by the students' presence to pick up their tab.

"They take a 45-minute class, and to actually have to do something for that duration - and be forced to finish - is a tough task for today's teenagers," says Sink-Morris, who has taught Hidden Valley's dance and aerobics class for eight years and began partnering with Wright and Gold's Gym three years ago. "A lot of kids still aren't really physically active until they become adults, so this gives them a little exposure ahead of time."

"In a way, it turned out to be marketing for the gym, because we've gotten some new members," Wright says, adding that Gold's offers special discounts for high school students. "It puts out the message of why we're really here: to promote fitness and start it at an earlier age. Fitness can be fun."

The Gold's Gym field trips often are the first time many kids truly embrace that notion, Wright and Sink-Morris say, because most of them have never stepped inside a health club before. And even if their parents happen to be members, chances are the kids haven't done much exercising. "For some of them, I think it's intimidating - especially for females," says Sink-Morris, whose students are almost always girls. "When you're a female in high school, you're very concerned about body image. And when you go into a gym, you think all eyes are going to be on you. A lot of females are like that, even as adults."

While this program won't eliminate the intimidation factor, both women agree that it can help kids feel more comfortable working out in public. In fact, they're considering a similar program for middle school students, a group traditionally more receptive to learning new things, according to Sink-Morris, who taught at the junior high level for a dozen years.

"Maybe the focus should be moved to middle school," Wright says. "Unfortunately, that's the age that gets left out at clubs. The little ones can have things that are created just for them, and the older ones can mainstream into the adult classes."

So far, Hidden Valley High is the only school in the area to form a partnership with Gold's Gym, although Wright says she has reached out to others. Club managers looking to create similar programs in their own communities should start by contacting a school district's P.E. supervisor, Sink-Morris suggests. Conversely, teachers simply need to call a club and inquire about the possibilities, she says. "I don't know why other schools don't get involved with something like this. It's a great opportunity."