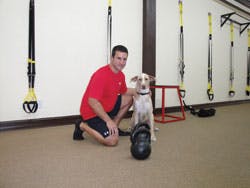 Instead of kicking off 2010 with a weight-loss contest in which his clients competed against one another for prizes, fitness trainer Dale Buchanan - owner of Supreme Ultimate Fitness in Boca Raton, Fla. - determined that their collective efforts would assist the local Tri County Humane Society. For every pound clients at Buchanan's 900-square-foot studio shed between Jan. 4 and Feb. 28, he planned to donate $10 to the no-kill animal shelter, which rescues thousands of dogs and cats each year.

In Palm Beach County, where Buchanan's facility is located, the Tri County Humane Society estimates that more than 60,000 unwanted pets - many of them abandoned or abused - will face euthanasia this year. The numbers in nearby counties are equally troubling, with 65,000 in Miami-Dade and 45,000 in Broward.

In May 2008, Buchanan adopted Spaulding, a two-year-old lab/greyhound mix from a shelter in Muscle Shoals, Ala. Spaulding has become a fixture at Supreme Ultimate Fitness, relaxing as he observes his owner's clients train with kettlebells and other nontraditional equipment. The idea for the fundraiser came from one of Buchanan's Facebook friends in Los Angeles, who announced a housewarming party and asked guests to bring donations for a local animal shelter. He decided on a $10 per pound donation because he wanted to make it substantial enough to give his tight-knit group of clients (many of them fellow dog lovers) incentive to make their efforts worthwhile. And he's already thinking about a spring fundraiser for the shelter that would tie in with a kettlebells lift-a-thon.

In January and February, though, Buchanan remained focused on his first fundraiser. He promoted Supreme Ultimate Fitness and the Tri County Humane Society through local newspapers and television stations, and he also spread the word via Facebook and Twitter. "The response from the fitness community has been huge, and I think it's going to have a ripple effect for animal shelters and other causes," he says. "Fitness professionals all want to jump on board and do something like this in their communities - or help me do it in mine by sending me money. Any facility can do this."