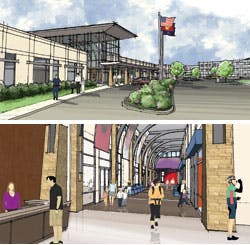 A stone's throw from downtown Greenville, S.C., site work is under way in the West End Neighborhood for the Salvation Army Ray and Joan Kroc Corps Community Center. Designed by Greenville-based Craig Gaulden Davis, the $27 million facility will include a 300-seat chapel and performing arts center, a 300-seat conference room, a gymnasium with spectator seating, a fitness center, a 25-yard pool with zero-depth entry, a game room, a computer room and a multipurpose activity area for afterschool programs, and the Salvation Army Boys & Girls Club. As part of the project, expected to be completed early next year, existing outdoor soccer fields, golf practice facilities and a baseball field will be complemented by a new playground and a 16-court tennis complex with the capability to host tournaments. On five acres adjacent to the Kroc site, the Greenville County School District plans to construct an 87,500-Â­square-foot school with a focus on engineering. 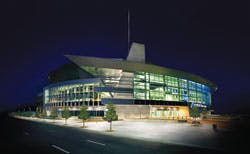 Rendering of the Intrust Bank Arena

On January 9, country music star Brad Paisley headlined the first big event at the $185 million Intrust Bank Arena in downtown Wichita, Kan. Incorporating 22 suites, 40 loge boxes and 300 premium seats, the arena - named after the bank that shelled out $8.75 million to secure rights for 25 years - has the largest seating capacity (17,500 for concerts and 15,000 for basketball and hockey) of any arena in the state. The facility also features 65-foot ceilings for a more intimate atmosphere, 16 concessions stands, a pre-function room with seating for 150 guests, 12 ticket windows, an indoor box office and a four-sided, center-hung LED scoreboard complemented by LED screens throughout the entire seating bowl. Owned by Sedgwick County and operated by SMG, the arena provides the home ice for the Central Hockey League's Wichita Thunder and is scheduled to host a regional round of the 2011 NCAA Division I Women's Basketball Tournament. . .

Residents swarmed to the January opening of Roanoke County, Va.'s $32 million Green Ridge Recreation Center. The 76,000-square-foot facility features a wellness center, a 18-mile walking/jogging track, a gymnasium with six basketball backboards and two volleyball courts, and a multipurpose activity room featuring an array of interactive fitness and gaming equipment. The facility also features an indoor pool with two lap lanes, zero-depth entry, a hot tub, a current river, a water slide and a children's water playground. An outdoor leisure pool with a 32-foot-tall water slide is scheduled to open in May.