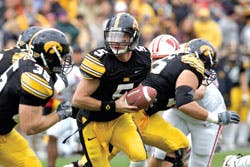 A DAY AT THE OFFICE College football at the FBS level is akin to a full-time job, according to the author of a new report.

The College Sport Research Institute at the University of North Carolina in late August released its 2010 Division I Football Adjusted Graduation Gap report, and the numbers indicate the existence of a sizable gap.

The first-of-its-kind report utilizes the published four-class average graduation rates for the 1999-2002 cohort (the most recent available) and removes data related to part-time students. The result is a comparison of how football players, who are also full-time students, stack up against the general full-time male student population. Overall, NCAA Division I football players graduated at a rate of 54.5 percent, 13.9 percentage points behind the male student population at large (68.4 percent).

Only one conference among the 23 competing at the Division I level posted a positive AGG. Players in the Southwestern Athletic Conference graduated at a rate 6 percentage points better than the full-time male population who attended SWAC institutions. Moreover, the top seven spots in the report are occupied by Football Championship Subdivision conferences: SWAC, Mid-Eastern Athletic, Big South, Southern, Southland, Northeast and Patriot.

Combined, FBS players lagged behind their male counterparts by 18.5 percentage points, while FCS players trailed by 9.7. Since football players at both FBS and FCS schools graduate at approximately the same rate, the greater FBS gap is a result of full-time male students graduating at a higher rate (73 percent) than full-time male students attending FCS schools (63.2 percent).

The study's authors attribute at least some of the graduation rate disparities to time constraints placed on football players, particularly during the fall term. "Football at the FBS level is akin to a full-time job. So is being a student," CSRI director Richard Southall states in the report. "Something inevitably has to give, and the AGG reveals what is giving is football players' graduation rates."