Ground has been broken at the University of Michigan for the Basketball Player Development Center, the latest in a series of new athletic facilities throughout the main campus in Ann Arbor. The $23.2 million, 57,000-square-foot facility will include practice courts, staff offices, large locker rooms, athletic training and exercise areas, meeting spaces, a team video-viewing room and a Michigan Basketball Hall of Fame - all attached to the university's existing competition venue, Crisler Arena. Designed by Bloomfield Hills, Mich.-based TMP Architecture in association with Denver-based Sink Combs Dethlefs, the center will be augmented by $20 million worth of renovations to the arena. . .

The University of Colorado Denver broke ground at its Anschutz Medical Campus in Aurora for a 94,000-square-foot Health and Wellness Center. The project was made possible by $17 million in donations by the Anschutz Foundation. Designed by Cannon Design and Denver-based H+L Architecture, the facility will house the Center for Women's Health Research, and it will allow for collaborations by experts throughout the campus in the fields of nutrition, exercise, physiology and obesity/weight management. In addition to being a research facility, the center will offer numerous public programs, as well as exercise and nutrition services. Specific amenities will include a fitness center, a nutrition lab, a training kitchen, a restaurant and a grocery store.

The Austin, Texas, city council has approved spending $8.6 million to fund the construction of a new recreation center to be operated for at least its first 20 years by the Y. . .

The University of Washington has selected a developer for the $250 million renovation of Husky Stadium, expected to get under way next fall. . .

The Booker T. Washington High School Fieldhouse in Tulsa, Okla., has been demolished to eventually make way for a $9 million, 58,000-square-foot replacement. . .

The Woodlands, Texas, Township is exploring a public-private partnership to develop a new sports fields complex, and a developer is proposing donating a 23-acre site for the project. . .

The rural municipality of Macdonald, Manitoba, has gotten approval to borrow nearly all of the estimated $3.5 million needed to fund construction of a new recreation center in the rural community of La Salle. . .

The Hanover (Pa.) Public School District is considering either replacing the aging Sheppard-Myers field, a high school stadium complex, with a new $5.28 million complex or spending $2.5 million to renovate the facility. . .

The Sunriver (Ore.) Owners Association has approved funding for an $18.9 million aquatics facility, which will include indoor and outdoor pools and a lazy river, among other amenities. . .

The Carol Stream, Ill., park district has agreed to pay $1.6 million for six acres of land on which to construct a $17 million to $20 million recreation center. . .

Texas State University has announced a $32 million renovation plan for its Bobcat Stadium. The 30,000-seat stadium is expected to open in 2012, the same year the Western Athletic Conference has said it hopes to accept new members. . .

The University of Wisconsin athletic department has proposed developing a $78.6 million athletic performance center, which would include new football locker rooms and weight training areas. . .

Texas Christian University has announced a $105 million football stadium renovation project that calls for, among other amenities, a new press box and the addition of 24 suites and 2,300 club seats. 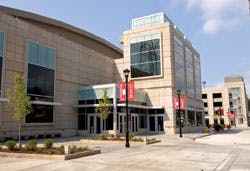 In September, the band Weezer was the first to rock Bradley University's new 4,200-seat arena and athletics complex. While the complex will regularly hold concerts and other community entertainment events, it will also support numerous Braves athletics and recreation programs. The $50 million, 165,000-square-foot facility includes multiple basketball and volleyball practice courts, and the competition arena features padded seats and numerous video boards. Other amenities include players' lounges, video viewing rooms, a training room with an underwater treadmill, and the glass-enclosed Braves Club room that overlooks the competition court. Heritage Hall is a museum-like room that pays tribute to the Braves' athletics history. 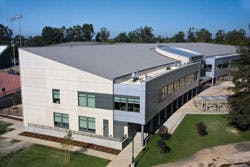 Students at California State University, Sacramento, have benefitted this semester from the opening of The WELL (Wellness, Education, Leisure, Lifestyle), a $71 million, 151,000-square-foot recreation center (left). The facility offers the university's 28,000 students and 3,400 faculty and staff members a broad spectrum of amenities including a climbing wall, four basketball courts, a large multiactivity court, cardio and weight training areas, and group exercise studios. Other wellness-related amenities include a pharmacy, a laboratory, and offices for physical therapy, nutrition, optometry and mental health. Among the facility's numerous sustainable features is an entrance atrium with a skylight made of innovative thermoplastic. The WELL's opening is part of Sac State's Destination 2010 celebration, the culmination of a campus facilities plan implemented in 2004.