A groundbreaking ceremony for the Hank Norton Center, a multipurpose athletics facility supporting all of Ferrum College's outdoor sports programs, was held in October, just before the Division III Panther football team took the field against North Carolina Wesleyan. Named after the football team's coach from 1960 to 1993, the $5.5 million, 29,000-square-foot facility will boast training suites, a Ferrum College sports hall of fame, a weight room, coaches' offices, referees' locker rooms, and classrooms for athletic training, sports medicine and health sciences. Designed by Lynchburg, Va.-based Craddock Cunningham Architectural Partners, the center will feature a brick facade next to the existing Adams Stadium. Construction is expected to be completed late next year.

Construction is under way in the heart of Seattle for a new 21,000-square-foot fitness center at Seattle University. The $10 million facility, which will adjoin the university's existing recreation center, will feature cardio and weight training areas, group exercise studios, fitness assessment offices and locker rooms. Designed by Seattle-based Olson Kundig Architects, the facility will feature large windows facing 14th Avenue that will provide exercisers views of the streetscape while giving pedestrians views of activity areas within the building. Part of a $164 million capital campaign that also includes a new library and residence halls, the fitness center is scheduled to open next September. 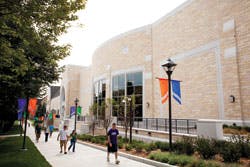 Anderson Athletic and Recreation Complex (Photo courtesy of the University of St. Thomas)

The 180,000-square-foot Anderson Athletic and Recreation Complex opened in September on the campus of the University of St. Thomas. The $52 million complex houses an aquatic center that includes a 25-yard pool with a diving area and spectator seating for 400 people, a 2,000-seat arena for basketball and volleyball featuring a 10-by-16-foot video display and a 36-speaker sound system, a field house with a 200-meter track, fitness facilities for both cardiovascular and weight training, group exercise rooms, locker rooms and athletic department offices. The complex is also the new home of the university's health and human performance department. . .

The College of Saint Rose and the City of Albany hosted a community celebration in September for the opening of the Christian Plumeri Sports Complex, which includes fields for baseball, softball, soccer and lacrosse. The $6 million, 14-acre complex will serve several of the university's athletics programs, as well as university intramural and recreation programs, community recreation programs, area high schools and summer sports camps. The university will access the field complex through a 30-year lease agreement with the city. . . 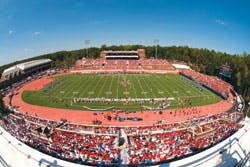 For the first time in 80 years, the University of Richmond was able to host a football game on campus, with the opening of the renovated E. Claiborne Robins Stadium. For years, the stadium - formerly known as First Market Field - has been the primary venue for the university's track-and-field, lacrosse and soccer programs, but the $25 million renovation increased the seating capacity to 8,700, added a new scoreboard, expanded and modernized the press box, and upgraded the lighting and sound systems. University officials also expect the venue to host numerous youth camps, as well as the Virginia Special Olympics.

Penn State University officials have announced the largest private gift in the university's history - $88 million to fund a multipurpose arena. The arena, which will house the only major competition rink within an 80-mile radius, is expected to help the university launch an NCAA Division I hockey program. . .

Construction is scheduled to begin next year for a new indoor football practice facility at Georgia Tech University. More than half of the $6 million to $7 million cost of the facility has been covered by a single private donation. . .

Franklin & Marshall College has announced plans to turn a 44-acre plot of land consisting of woods and wetlands in Lancaster, Pa., into an urban park with trails, public education stations and boardwalks. . .

More than $8 million has already been raised to fund an approximately $12.7 million Y in Mukwonago, Wis. Construction of the 57,000-square-foot facility will begin when an additional $2 million in community donations has been raised. . .

The Board of Governors at West Virginia University has given the go-ahead to a $27 million plan to consolidate student health services and recreation services into a single new 51,000-square-foot facility. The plan - which involves construction in phases over the next six years - also includes new soccer fields, tennis courts, baseball and softball fields, and walking trails.