Massive Revitalization Project Could Be Template for Urban School Districts

Few urban school districts' athletic programs were in need of an extreme makeover as much as Buffalo Public Schools. 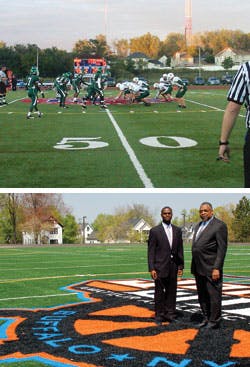 Few urban school districts' athletic programs were in need of an extreme makeover as much as Buffalo Public Schools. And nothing symbolized decades of neglect more than the solitary tree standing in the middle of the condemned concrete grandstands at ancient All-High Stadium - where football players battled in tattered uniforms and cheerleaders worked the sidelines in street clothes.

That was before the district took a giant leap of faith with commencement of the Joint Schools Reconstruction Project - a state-supported 10-year, $1 billion capital improvements campaign that eight years later is showing a wealth of tangible results. In addition to countless classroom renovations and innovations at 47 schools and counting, the project also has resulted in the rejuvenation of multiple gymnasiums, more than two-dozen swimming pools and three football stadiums. Today, All-High Stadium holds 4,200 spectators and proudly boasts a synthetic-turf field, updated chair-back seats and bleachers, an all-weather track, renovated restrooms, a maintenance garage, new lights - and, notably, no tree.

The massive reconstruction project has been rooted in a desire to more aggressively connect the dots between the classroom and the locker room. "Academics and athletics must go together, and we have to make sure our athletes understand that, in order for them to get a good education," says BPS superintendent James Williams, who arrived in 2005 from Ohio, just as the reconstruction project was picking up steam.

Despite an abundance of athletic talent, many BPS student-athletes lack academic qualifications and discipline. "We have a low percentage of African-American males graduating, so we have to come up with ways to keep them in class," says Aubrey Lloyd, executive director of athletics for BPS, who started out in the district as an assistant principal. "We're bringing back the feeling that students have ownership in their schools. I meet with student-athletes and coaches every chance I get to instill some pride in what we have, and I look forward to three or four years down the road, when we are getting many more students into college."

To that end, the district is investing in new software that tracks student-athletes' class attendance and grades. While the numbers aren't in yet to reflect the strides BPS has made in this area, Williams and Lloyd are optimistic - and they credit the athletic improvements that have taken place in recent years.

This much is clear: BPS sports programs are thriving. Approximately 4,200 student-athletes participated in high school sports during the 2009-10 academic year, an increase of 27 percent for girls and 22 percent for boys since 2006-07. Buffalo's nine high school football programs, which have been provided with more coaches, equipment and technology, joined New York's powerhouse Section VI Football Federation in 2010, and the district's 15 high school basketball programs were recently realigned to make them more competitive. Additionally, a district-wide boys' lacrosse club began this spring with the goal of attaining varsity status by 2013 (the year the reconstruction project is slated for completion).

Michael Bogucki, the principal of Buffalo-based Paradigm Economics who has been involved in the reconstruction project as a consultant practically from the start, says the BPS approach to academics and athletics also may help save teachers' jobs in an economy in which layoffs have become an annual reality. "If you can give students additional reasons to stay in school, then you have an argument for maintaining a teacher base that can adequately address the volume of students in a district," he says. "That's not a crazy connection to make."

What once did seem crazy - BPS football teams competing in Section VI - came to fruition last fall when they began playing suburban teams from outside the district for the first time. During the previous century, BPS schools had battled against each other every season, which always culminated in the annual Harvard Cup, a now-defunct Thanksgiving Day tradition that crowned a city champion. Because teams were not part of Section VI, they were neither eligible for the state playoffs nor were they divided into classifications based on enrollment. Larger schools often played smaller schools. "Now, competing against schools of the same size allows all athletes to really showcase their talents," Lloyd says.

Five of the nine BPS football teams made the playoffs last year, with the International Preparatory School at Grover making it to the state quarterfinals. BPS facilities hosted regional games (in which all five BPS playoff teams appeared), and All-High Stadium has been tapped to host a regional NFL High School Player Development 7-on-7 tournament later this year.

BPS basketball teams, although part of Section VI for years, were similarly realigned, so local schools now compete against schools of like size and play each other twice per season. As a result, 14 of Buffalo's 15 teams made it to the first round of the playoffs, with three advancing to the state tournament. Says Lloyd, "I think western New York is starting to see Buffalo Public Schools in a more positive light."

That light has a source. To make the Joint Schools Reconstruction Project possible, district officials received state funding and grant money, formed the nonprofit Buffalo Public Schools Foundation and fostered new partnerships with local YMCAs, Boys & Girls Clubs, private high schools, the NFL's Buffalo Bills, Minor League Baseball's Buffalo Bison, and area colleges and universities. As an example of the continuing partnerships, a joint athletic complex for use by district schools and Buffalo State College on the BSC campus is in the design phase.

A change in the district's business model also was required, according to Bogucki. "The district revisited basic decision-making with respect to budgeting, policies and reallocation of existing resources," he says, adding that other districts can do the same. "The effort certainly does not have to be all about money, and I don't believe it has to be primarily about money. Good things can be done through a strategic assessment of where you're at and then a critical dialogue regarding where you want to be."

In Buffalo, that dialogue now includes weekly meetings between Williams and Lloyd to discuss how academics and athletics are working hand-in-hand on a consistent and effective basis at all 16 of the district's high schools. Williams also has held school athletic departments accountable to hit certain benchmarks every year.

Plenty of work remains to be done, including a technology upgrade for schools renovated during the early phases of the reconstruction project. But the athletics component, save for the possible addition of more sports as time goes on, appears to be nearing completion. "This type of project has not been attempted anywhere else in urban education, and we want to share our vision and planning concepts to help other school districts," Williams says. "We have not deviated much from the original plan, and now we're just very proud."