The University of Washington broke ground in late July on a $4 million, 9,000-square-foot baseball operations facility that is the first step toward a possible $10 million to $12 million expansion of the 2,212-seat Husky Ballpark into a 3,000-seat stadium.

The University of Washington broke ground in late July on a $4 million, 9,000-square-foot baseball operations facility that is the first step toward a possible $10 million to $12 million expansion of the 2,212-seat Husky Ballpark into a 3,000-seat stadium. Designed by SRG Partnership Inc. of Seattle, the two-story operations facility will sit in the ballpark's right-field corner and include a 1,600-square-foot player locker room with direct access to the field through a mud room, a 400-square-foot medical training room, an umpires' room, a players' study room, an equipment room, a video room, a coaches' locker room and offices, and a 1,400-square-foot meeting area boasting sweeping views of the field and of Lake Washington behind it that can serve as a pregame reception area for guests and program supporters. The project is due to be completed in March 2012.

AIB College of Business has broken ground on a $1.5 million addition to the AIB Activities Center that will provide additional locker rooms, training space and athletics offices. The physical expansion to the 1999 building has been deemed necessary after an expansion of the school's athletic program, beginning with the 2007 resurrection of its women's basketball team after a 50-year hiatus, the addition of men's and women's golf in 2008 and the school's acceptance into the NAIA's Midwest Collegiate Conference in 2010. AIB will begin competing this fall in women's volleyball and men's basketball, and is looking to add men's and women's soccer in 2012 and baseball and softball in 2013.

An expansion of The Bruin Activity Center, a 15,625-square-foot indoor sports facility located at Bartlesville High School in Tulsa, Okla., broke ground this summer on land that had been the home of Crestview Apartments, which Bartlesville Public Schools purchased and razed. The 50-foot-wide expansion will provide additional space for the many recreational groups that use the building, which includes a practice field and batting cages.

Members of Northfield (Minn.) Area Family YMCA will no longer have to work out in the converted dining hall of the senior center if the city council signs off on the Y's plans to build a dedicated facility. The Y has signed a purchase agreement on a five-acre piece of land, pending city approval, and intends to build a 45,000-square-foot building that would include a pool, a gym, a walking track, a health and wellness center, locker rooms and community space. According to the Minneapolis Star Tribune, $2.7 million has been raised, with the ultimate goal of between $6 million and $11 million, and a 2013 start date on construction. . .

A plan estimated at $33 million to renovate the Cumberland County (Maine) Civic Center, home of the American Hockey League's Portland Pirates, faces public hearings followed by a possible bond referendum in November. The renovation would involve replacing arena seating, creating a premium-seating section, upgrading concessions stands and the box office, and making changes to backstage areas. Of concern to county commissioners is a rival plan by private developers to construct The Forefront at Thompson's Point, a mixed-use project that will include an arena (though not an ice rink), a convention center and music hall. . .

A $1.8 million renovation of the Samuel Clemens High School field house in Schertz, Texas, got a boost in July when the Schertz-Cibolo-Universal City School District's board voted to direct $300,000 from the district's land acquisition fund toward the project. The funds transfer covers an overrun caused by a design review that added code-required upgrades to the project's scope. The district is hoping for a November start to the renovation, with July 2012 the targeted opening date. 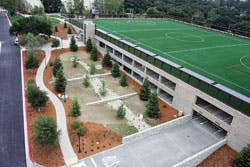 The South Campus Parking Structure, a three-level building with spaces for 600 vehicles topped by an NCAA Division III regulation-size synthetic turf field for soccer and lacrosse, opened on the campus of Pomona College in July. The field is ringed by a tube-steel shade structure outfitted with photovoltaic panels that will provide most of the electricity needed by the parking structure, and the $21 million project included installation of a PA system and two scoreboards. Among the other green features of the building is the inclusion of LimeLight, a wireless lighting control system that senses motion. Lights, which are turned down in the evening, increase to full power one floor ahead as a person walks or drives through the structure, ensuring that lights are used only when needed. . .

The 25,000-square-foot East Oakland (Calif.) Sports Complex opened its doors in time for the July 4 holiday. The $24 million complex features the city's only public indoor pool, a fitness center, a dance/aerobics room, multipurpose activity space, locker rooms and a learning/media center. A future addition that would double the size of the center awaits funding; it would include a gymnasium with a suspended running track, soccer and baseball fields, and a 25-yard-by-25-meter competition pool that would replace the site's existing Brookfield/Ira Jinkins Recreation Center. . .

A $3 million makeover of Niagara University's 62-year-old Taps Gallagher Center wraps up this month, and includes the renovation of locker rooms and coaches' offices, and the creation of team areas and a student lounge. The new amenities serving the 2,400-seat arena are expected to better position the school's men's and women's basketball programs as they recruit against their Metro Atlantic Athletic Conference rivals.