Construction is under way on a two-phase recreation complex (pictured) in Richardson, Texas. 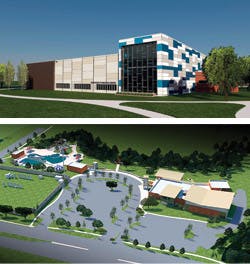 Construction is under way on a two-phase recreation complex (pictured) in Richardson, Texas. The first phase will see the construction of a new facility specifically for the city's gymnastics program, while a second phase will reconfigure and expand the existing Heights Recreation Center, as well as construct the Heights Family Aquatic Center (which will mark the city's first new pool in 40 years). Designed by Dallas-based Brinkley Sargent Architects, the facilities are expected to achieve LEED certification when completed in 2013.

After years of planning, the University of Tampa has begun construction of Naimoli Family Intramural and Athletic Complex. The facility, expected to be completed in December, will include a synthetic turf multipurpose field, a 1,450-seat stadium and two spectator berms. In addition to intramural use, the field will be home to the men's and women's lacrosse teams.

Elon University is moving forward on the construction of a softball complex, to be called Hunt Softball Park in honor of donors Sam and Vicky Hunt. The complex, designed by Corley Redfoot Architects Inc. of Chapel Hill, N.C., will be constructed in three phases. The first phase, which will include the field, dugouts, lighting, scoreboard, press box and grandstand seating, is scheduled to be complete by spring 2013. The subsequent phases will build additional seating, a clubhouse with locker rooms, an entry plaza and concessions space.

The Clark Center gymnasium at the University of Massachusetts-Boston has closed for renovations. When it reopens this fall, it will feature a new hardwood floor, improved lighting and upgraded bleachers.

Following school board approval, the Alpine (Texas) Independent School District broke ground this spring on a renovation of its outdated Buck Stadium, including the installation of a track. The $1.9 million project will replace the existing field with synthetic turf and become a home for the high school and middle school football teams, which had been unable to host visiting teams due to safety concerns and instead played their games at a nearby university. The renovations are expected to be complete by August.

Manatee and Sarasota counties are awaiting approval for $5 million in government funding that would help turn Nathan Benderson Park into a world-class rowing facility and rename it the Florida World Aquatic Center. The complex would also be used to host triathlons and canoeing, kayaking and other water sports competitions... A lone citizen has begun the long approval process required for the construction of a $15 million sports arena on town-owned land near Cantine Park in Saugerties, N.Y. The project, which will include an indoor turf field, an indoor track, an Olympic-size pool and four basketball courts, and offer free use for students during school hours, will be funded privately by an as-yet-unnamed donor and needs town approval, as well as approval from the state to enter into a public/private partnership with the town... Quebec City and Quebecor Media Inc. have reached an agreement on the construction of a $400 million, 18,000-seat sports complex. The city hopes to use the new facility to lure in an NHL franchise. Construction is expected to begin in September... The Norton Shores (Mich.) City Council has approved a grant application to install lights at three baseball diamonds in Ross Park. The city is offering to pay half of the expected $440,000 project, which would also install a walkway and deck at the park... Olentangy Liberty High School in Powell, Ohio, is seeking school board approval for the construction of a dedicated wrestling facility. The privately funded $1.8 million facility would be about half the size of a typical gymnasium with permanent wrestling mats installed in the floor and provide seating for 800... The Board of Regents at the University of Nebraska-Lincoln has approved a $5 million plan to build two research labs in East Stadium. A partnership between the academic and athletic departments, the athletic performance lab will offer students more opportunities for hands-on experience, as well as advance concussion and brain injury research. 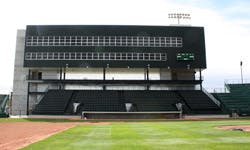 An $8.3 million upgrade to Stocker Stadium and Suplizio Field wrapped up last month in Grand Junction, Colo. The restrooms and concessions areas were replaced with more modern accommodations, and special mezzanine and first-base areas will provide more seating options for fans with disabilities. A new stadium press box offers more room for coaches and media, and renovations to seating areas have replaced baseball bleachers at Suplizio Field with individual seats. Seating capacity at both facilities increased by 150, and a glass-walled hospitality level will offer room for an additional 200 fans. The changes have allowed the city to lure in a new tenant, the Grand Junction Rockies minor-league team, and secure a 25-year contract extension with the Junior College World Series... 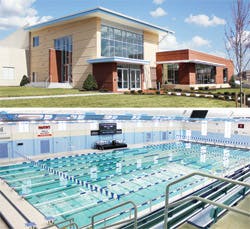 (Photos courtesy of Baskervill)
The Greater Richmond (Va.) Aquatics Partnership's Collegiate School Aquatics Center is now open. Many community organizations worked together to complete the $14 million project, which was designed by the Richmond-based architectural firm Baskervill. The 50-meter pool already has nine world records attached to it. Previously located in Omaha, Neb., the pool was used in the 2008 Olympic Trials, then disassembled and transported to Virginia. The 54,000-square-foot aquatics facility also includes a therapy pool, a multiuse pool, locker rooms, an indoor fitness center and grandstand seating for 700... The Lincoln Park Family Aquatics Center in Marion, Ohio, is scheduled to open this month. Visitors can enjoy a six-lane pool with zero-depth entry, two waterslides, a family slide, a lazy river, a play area and a toddler pool. New locker rooms will feature natural lighting to reduce energy costs... A ribbon-cutting celebration is scheduled this month for a $44 million Ray and Joan Kroc Center in Suisun City, Calif. Sacramento-based GRA Architecture brought together what was once five separate buildings to create the 60,000-square-foot facility, which features a gymnasium, a fitness room, offices, a banquet room, three pools, a playground, a 300-seat auditorium and more.
Sign Up for AB Today!
Get industry news, insights, and new product information delivered straight to your inbox.
Read Next
Home