Construction is under way on Albuquerque (N.M.) Public Schools' first new football stadium in 45 years (above). West Side Stadium will take some of the burden off two other stadiums currently serving the needs of the district's 13 high schools.

Construction is under way on Albuquerque (N.M.) Public Schools' first new football stadium in 45 years (above). West Side Stadium will take some of the burden off two other stadiums currently serving the needs of the district's 13 high schools. Designed by SMPC Architects of Albuquerque, the 7,000-seat stadium and synthetic turf field are expected to be completed by this fall, followed by a track with a natural grass infield in spring.

Kansas State University has begun work on upgrades to Snyder Family Stadium. The $75 million renovation will replace the existing press box with a new limestone gateway to campus, as well as add an athletes' dining hall, luxury suites and a ticket office. AECOM of Kansas City is leading the project, working in association with design architect Heery International. 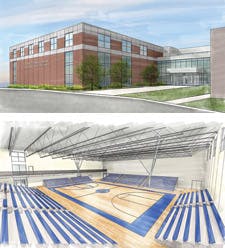 Construction begins this month in Mendota Heights, Minn., on St. Thomas Academy's new Student Activities Center (below), which will replace an inflatable dome serving as a makeshift shelter for student activities. Expected to be ready for the 2013-14 school year, the $18 million project will feature a competition gym and two practice gyms, a locker room, a wrestling room and classrooms. The Opus Group, headquartered in Minneapolis, is serving as the project's architect and structural engineer.

Arizona State University has begun construction of the Sun Devil Fitness Complex at its Polytechnic campus. The 60,000-square-foot facility will feature three basketball courts, a swimming pool, locker rooms, a bike co-op, and a health and wellness center. Designed by 360 Architecture of Kansas City in conjunction with Tempe-based ARchitekton, the complex is expected to achieve LEED Silver certification when completed in January 2013.

Commissioners in Pasco County, Fla. agreed to commit up to $14 million toward the construction of a youth sports complex, the Fields at Wiregrass. The funding will go toward the construction of multipurpose fields or baseball and softball diamonds, as well as cover construction of parking lots, a welcome center, concessions stands, restrooms and playgrounds. When completed, the complex will be capable of accommodating 64 baseball or softball teams or 100 soccer or lacrosse teams in a single day... A financing plan is being developed to improve and expand the amateur sports industry in Rockford, Ill. Headed by a group called Reclaiming First, the $30 million project will add 12 lighted, synthetic turf multipurpose and soccer fields and one lighted softball diamond to the Sportscore Two complex, as well as add more soccer fields to the Indoor Sports Center and build a new complex to house basketball, volleyball and an indoor skate park. Once the financing plan has been developed, it requires approval from the city council, county board and park districtâ¦ Local leaders in Hagerstown, Md., are seeking funding for a new stadium to replace 80-year-old Municipal Stadium. The $30 million stadium would provide a new home for the city's minor league baseball team, the Suns... Vanderbilt University has received approval from the Board of Trust to begin work on a new recreation center and multipurpose facility. The project will upgrade and expand the existing Student Recreation Center and construct a new multipurpose facility with an indoor practice field for the university's athletic and intramural teams, as well as a 300-meter track for use by the university's athletic teams, students, faculty and staff.

Photo of Recreation Facility
(photo Courtesy of University of Arkansas) 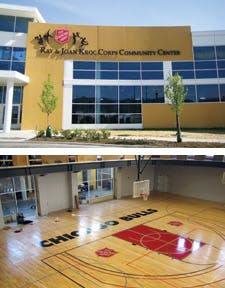 The Cleveland Velodrome is holding a grand opening celebration this month. Construction of the $300,000 outdoor track, designed by Rochester Hills, Mich.-based V-Worldwide Inc., is part of a planned multiphase project that will eventually cover the velodrome and add more infrastructure to make it a four-season facility open for cycling and field sports. The nonprofit Fast Track Cycling was responsible for instigating the project and will offer free coaching and equipment rental to youths... The Wayne County H.Y.P.E. Recreation Center opened last month in Dearborn Heights, Mich. A collaboration between Wayne County, H.Y.P.E. (Helping Youth Progress and Excel) Athletics and Zaman International, the 104,000-square-foot center will offer five indoor basketball courts, men's and women's weight training rooms and locker rooms, an indoor track, classrooms, a computer lab and more... The University of Arkansas' new University Recreation Fitness Center (below) is now open. The addition to the Health, Physical Education and Recreation Building provides 6,000 square feet of fitness floor space with state-of-the-art equipment, a 1,500-square-foot exercise room, and men's and women's locker rooms... After years of planning, the Salvation Army celebrates the grand opening of a new Ray and Joan Kroc Corps Community Center (right) in Chicago this month. Built on 33 acres, the $160 million project includes a 220,000-square-foot facility that houses a 5,000-seat sports complex, an aquatic center and water park, and spaces for fitness, recreation, education and the arts. The campus also features an outdoor stadium, basketball and tennis courts, a golf training center, baseball diamonds, batting cages and a running track. The project was designed by Murphy/Jahn of Chicago.