As one of his final acts before retiring in February, former U.S. Secretary of Defense Leon Panetta lifted the military's ban on women in combat - a groundbreaking and controversial move that will likely define his legacy. 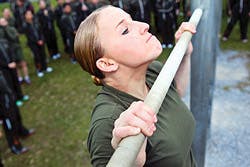 As one of his final acts before retiring in February, former U.S. Secretary of Defense Leon Panetta lifted the military's ban on women in combat - a groundbreaking and controversial move that will likely define his legacy.

Within hours of the official announcement rescinding the 1994 Direct Ground Combat Definition and Assignment Rule, discussions began in earnest about many aspects of the decision, including whether females (who comprise an estimated 13 percent of the Army and 7 percent of the Marine Corps) are physically strong enough for the front lines.

"Women have shown great courage and sacrifice on the battlefield, contributed in unprecedented ways to the military's mission and proven their ability to serve in an expanding number of roles," Panetta said on Jan. 24. "The department's goal in rescinding the rule is to ensure that the mission is met with the best-qualified and most capable people, regardless of gender."

Panetta also was adamant about what the Pentagon's decision did not mean. "Let me be clear," he added. "I'm not talking about reducing the qualifications for the job."

In November, the Marine Corps began making changes to its physical fitness test for females, announcing that the pull-up would replace the flexed arm hang - a component of that test since 1975.

"Since then, concerns have been raised regarding its validity as a dynamic test of upper-body strength necessary for military job performance. Civilian and military research supports these concerns," says Col. Sean Gibson, a Marine Corps spokesman, adding that the change had come up for discussion many times during the past 37 years. "The physical requirements of female Marines, commensurate with their roles, have increased greatly since 1975 and had outpaced our testing methods. In order to prepare for pull-up testing, we will improve our upper-body strength and conditioning exercises and activities. The resultant optimized physical conditioning will better our physical readiness."

In January, commanders and individual female Marines began adjusting training routines to prepare for implementation of the new requirements, and pull-ups will officially become a graduation requirement for recruits and officer candidates beginning Jan. 1, 2014. To pass, females will be required to execute at least three pull-ups.

But in a column titled "Why Women Can't Do Pull-Ups," The New York Times Magazine last fall reported on a study conducted by exercise researchers at the University of Dayton involving 17 normal-weight women who previously were unable to execute a single pull-up. "Three days a week for three months, the women focused on exercises that would strengthen the biceps and the latissimus dorsi - the large back muscle that is activated during the exercise," wrote Tara Parker-Pope. "They lifted weights and used an incline to practice a modified pull-up, raising themselves up to a bar, over and over, in hopes of strengthening the muscles they would use to perform the real thing. They also focused on aerobic training to lower body fat. By the end of the training program, the women had increased their upper-body strength by 36 percent and lowered their body fat by two percent. But on test day, the researchers were stunned when only four of the 17 women succeeded in performing a single pull-up."

The USMC is undeterred, and Gibson says no additional changes to the physical fitness tests for either gender are anticipated.

The Army, meanwhile, has administered the same physical fitness test to all soldiers, regardless of gender, since 1980. Consisting of two minutes of push-ups, two minutes of sit-ups and a timed two-mile run, the test requirements are based on age and gender, according to Stephanie Slater, public affairs specialist for the Army's Initial Military Training Center of Excellence at Fort Eustis, Va.

"The Army, along with other military services, is currently working on the development of gender-neutral physical standards," Slater says. "It is too early to speculate on the outcome of our research."

While the decision to allow women in combat carries the most weight for the Army and Marine Corps, rescinding the direct combat exclusion rule also affects women in the Air Force and Navy - branches that have long ranked ahead of the two major combat services in integrating females. The Air Force is now in the process of transitioning women into the seven remaining special-operations career fields previously closed to them, and Navy women may now serve on Virginia-class submarines (a class of nuclear-powered fast-attack vessels).

One military official suggested to The Navy Times the creation of a new "physical ASVAB," referring to the Armed Services Vocational Aptitude Battery, a written test that evaluates potential recruits. Under that idea, a version that includes fitness and strength performance would be administered before enlistment and influence recruits' job prospects.

Military departments have until May 15 to submit initial plans for integrating women into previously prohibited positions, and all changes must be implemented by Jan. 1, 2016. Multiple sources have suggested the shift won't take that long, although no early-target dates have officially been set. All told, approximately 230,000 jobs will be affected.

No matter what happens between now and then regarding the strength and fitness component of those plans, the USMC's Gibson remains confident in the final outcome. "As Marines do," he says, "they've taken up the challenge." 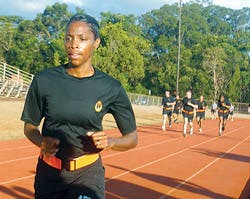 Count former U.S. Assistant Secretary of Defense Bing West among those skeptical of the Pentagon's decision to allow women into combat. "As politicians, the [Joint] Chiefs [of Staff] may have offered a token gesture, confident that the number of women actually qualifying will be tiny - say, less than one percent," West, also an ex-combat Marine, wrote for The American Interest. "There are women with Olympic-standard physical, mental and psychological attributes who could lead a SEAL or Army Delta team. But ... [i]n a ground combat force numbering in the hundreds of thousands, such women will remain very rare."

The ability of females to pass physical fitness tests to prove themselves combat-ready is a topic Joint Chiefs of Staff Gen. Martin Dempsey has addressed. "If we do decide that a particular standard is so high that a woman couldn't make it, the burden is now on the service to come back and explain to the secretary, why is it that high? Does it really have to be that high?" he said shortly after the 1994 Direct Ground Combat Definition and Assignment Rule was rescinded in January, and before essentially answering his own question. "The enemy does not lower their standards, and the Army is not an equal opportunity employer. If you are too tall, too fat, or not smart enough, you cannot get in."

Being too fat has been a problem in recent years. Between 1998 and 2010, the number of active-duty military personnel diagnosed as overweight or obese more than tripled, from 25,766 to 86,186, according to the Armed Forces Health Surveillance Center. The total percentage of women diagnosed in 2010 (8.2) was nearly double that of men (4.9), and during the first 10 months of 2012, the Army alone dismissed 1,625 soldiers.

"The military is a cross-section of today's society, and you have to be blind if you think that we're an in-shape nation," fitness expert and former Navy SEAL Stew Smith told AB in March. "The military may keep you if they need you. But if you look at a time right now where the military is downsizing, they're going to start having more teeth in the areas where they maybe didn't have much teeth 10 years ago."
-M.P.