Red Is the New Blue (and Green) at Eastern Washington

The new turf, which replaced natural grass and matches EWU's uniforms as much as possible, has been hyped for months - ever since EWU announced its plans in January to install the world's first red football field. Boise State University was the first to use a blue field (way back in 1986) as a way to draw nationwide attention to the mid-major school and its sizable investment - a gamble that's paid off handsomely in recent years for the Broncos, which recently achieved its highest preseason ranking in history when the Associated Press named BSU the third best team in the country. 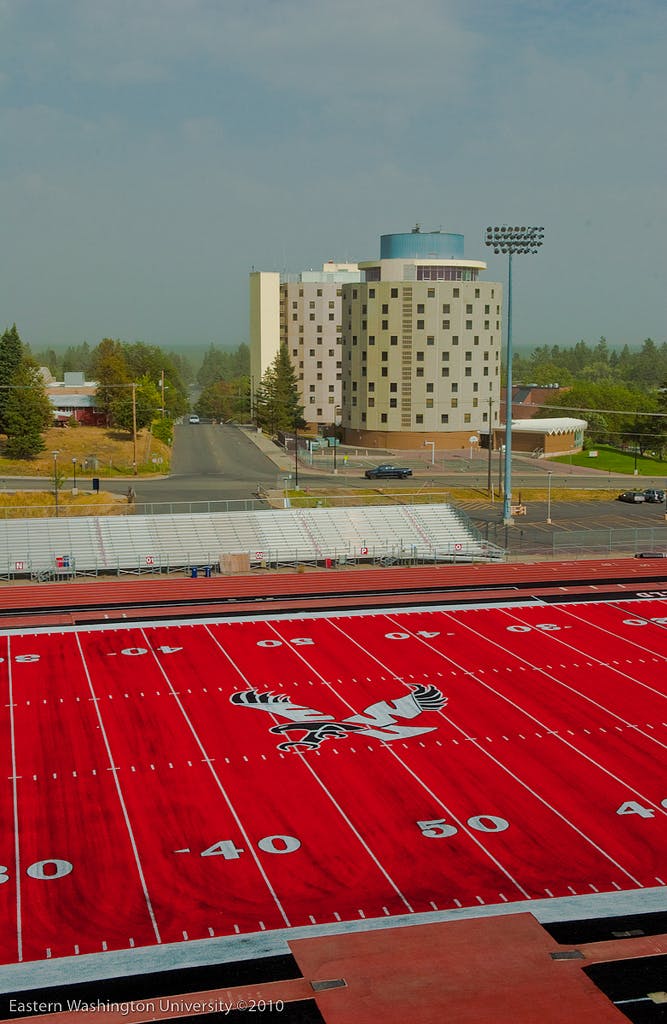 Already, EWU is experiencing the financial windfall a novelty field can bring. Bloomberg.com reports the university is saving $12,000 in field maintenance and 300,000 gallons of water annually. Season-ticket sales have tripled, the university bookstore is on its fourth order of "Red is the New Green" T-shirts and a webcam showing the construction of the field received more than two million hits. "The red turf is going to make a significant difference at the box office, in marketing and in merchandising," EWU athletic director Bill Chaves said.

In March, AB senior editor Paul Steinbach reported that Chaves claimed the decision to go red was overwhelmingly popular among the university's 25-and-under set, while purists - particularly elders who blanch at the thought of football played on anything but grass - were the lone detractors. And, Chaves added, "the recruits we're talking to and our team members can't be any more excited about it."

Outsiders, though, see things differently. Greg Rachac, a scribe for Montana's Billings Gazette, referred to EWU's field as "that awful red turf" in a blog this week. And Montana head coach Robin Pflugrad - who earlier in his career coached players who competed plenty of times on Boise State's blue turf - said during a teleconference earlier this week that the color of EWU's field doesn't phase him: "Our end zones are maroon, and so we've been practicing in the end zone all week. Hopefully, we can get in there every once in awhile."

Adding to all the excitement is that the game could shape up to be a dandy. This will be the ninth time in the last 15 meetings that both EWU and Montana enter the contest nationally ranked, at 16 and 6, respectively, in the Football Championship Subdivision. The first 3,000 fans through the gates will receive a complimentary chunk of red turf.

Regional television network SWX-TV will air the "Red Turf Special" tonight and Saturday night, detailing the project and revealing the official nickname of the new field, as voted by fans online.