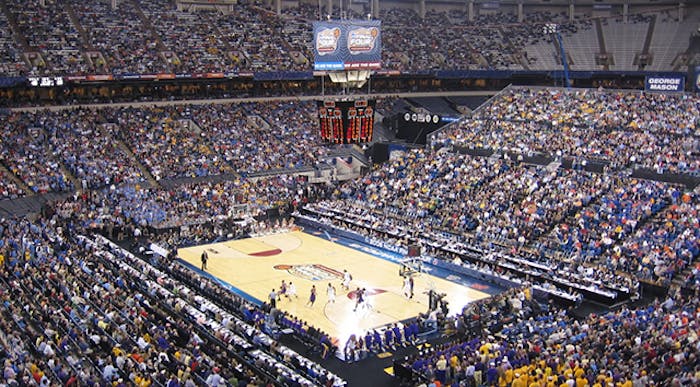 With another NCAA Tournament comes another year of excitement and in some cases, heartbreak. (Photo via shutterstock.com)

You’ve seen the shot thousands of times. As March Madness begins in earnest this week, you’ll see it a few more.

UCLA’s Tyus Edney dribbles the length of the court and hits the layup that beats Missouri in the 1995 NCAA Tournament.

Few moments in sports are better than the buzzer-beater. Shot goes up. Buzzer sounds. Shot goes in. Crowd erupts.

And 20 years ago Thursday in Boise, Idaho, I literally was on the other end.

As a trumpet player in the Tiger basketball band Mini Mizzou, standing just off to the side of Mizzou’s basket, I watched Edney and our hopes rapidly dribbling away. When the shot fell to beat Missouri 75-74, I looked around and thought, “What do we do?” We’d always play the fight song immediately after the final buzzer.

But everybody in the band just kept staring out onto the court while UCLA’s band triumphantly blared its fight song.

Playing in the band, and specifically playing in Mini Mizzou, was an absolute dream come true. The year before, we played in Los Angeles in the NCAA West regional. The top-seeded Tigers squeaked by Syracuse in overtime in the Sweet Sixteen, only to get blown out by Arizona two days later.

In 1995, Mizzou was an 8-seed heading to Boise, which coach Norm Stewart had hoped, jokingly, would at least have running water. Stewart was six years removed from a cancer scare that preceded his forming Coaches vs. Cancer. Before the first-round game against No. 9 Indiana, the Tigers wore blue “Get Well, Pokey” T-shirts in honor of Boise State football coach Pokey Allen. Allen was battling cancer and had had a tumor removed the previous day. He died the next year.

Mizzou beat Indiana 65-60. After the game, Hoosiers coach Bobby Knight lit into an NCAA liaison in the postgame press conference, a rant that also has been seen thousands of times.

Top-seeded UCLA breezed past Florida International in what amounted to little more than a scrimmage. It was not the best prep for the Bruins.

Flash forward to Sunday, March 19, 1995. Tigers freshman Kendrick Moore jumped in the lane and found Julian Winfield under the basket for an easy 2, giving Mizzou a 74-73 lead. UCLA called timeout with 4.8 seconds left.

Could it be that Mizzou’s NCAA Tournament luck would finally turn around? The Tigers were well known for first-round flameouts against Xavier, Rhode Island and Northern Iowa. Only twice had the Tigers been to the Elite Eight.

Mizzou guard Jason Sutherland tried to stay with Edney as he zigzagged down the court. Forward Derek Grimm put up his outstretched arms under the basket, but he allowed too much room for Edney to slide by and put up the layup.

After what seemed like 4.8 hours, we finally played our fight song, packed up and headed for the bus. The band and other school officials flew on the same charter as the basketball team. Had the Tigers won, Mini Mizzou would have flown back to campus, but the team would have stayed out West and head to Oakland, site of the West regional.

A couple hours later, we were already sitting on the plane when the team entered through the back. The first one aboard was Norm Stewart.

“Guys, here comes Coach!” I yelled from my seat.

We all gave Stewart and the team a round of applause as they made their way down the aisle. Stewart gave me a pat on the shoulder as he passed. The players seemed to loosen up in midair. A modest group of fans greeted us at Columbia Regional Airport.

Missouri is now coached by Stewart’s protégé, Kim Anderson, a former Tiger player and assistant who just completed his first season, the worst at Mizzou in 48 years. I’ve met and talked to Anderson over the years, and he’s the first coach of one my favorite teams whom I actually know. It’s heartbreaking to me to think that after waiting his entire adult life for his dream job, he may not get another chance if things don’t improve, especially with a new athletic director headed to campus.

The legacy Stewart left at Mizzou is not the 634 wins, the Big Eight Conference titles, the court that bears his name at Mizzou Arena, the few NCAA highlights or the difficult NCAA defeats. As this video reminds us, it’s his stewardship for Coaches vs. Cancer.

As for me, that day 20 years ago was the last time I picked up a trumpet and played at a basketball game. The following season, my senior year at Mizzou, I covered the Tigers for the Columbia Missourian, one of my first newspaper jobs as I embarked on a new career.

Just before the season, I took a look back at the Edney play for a profile titled, of course, “4.8 Seconds.” Among others, I got UCLA coach Jim Harrick on the phone. He acknowledged his team was extremely fortunate to win that game.

The night before the story published on Halloween, I finally got a one-line faxed statement from Edney, then a rookie with the Sacramento Kings. It wasn’t much of a line, something about how Missouri fans keep reminding him about the shot, but at least it was something.

The best line came from Moore, the Tigers guard whose play almost vaulted him into Mizzou lore.