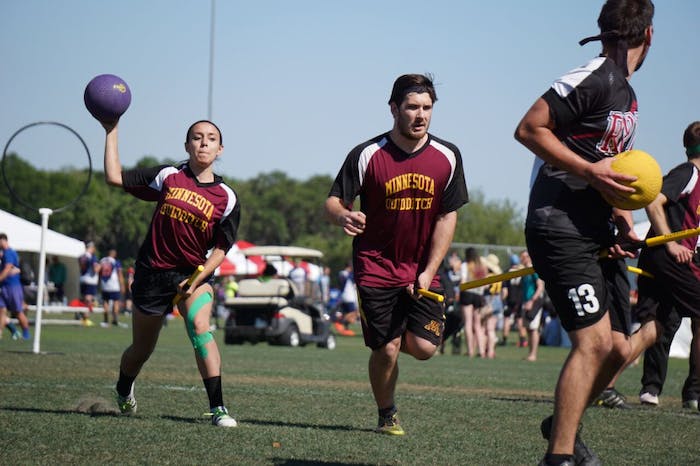 MADISON, Wisconsin – US Quidditch (USQ) is excited to announce that Madison, Wisconsin will host the 2017 Midwest Regional Championship at Breese Stevens Field in partnership with the Madison Area Sports Commission. USQ and Madison will welcome collegiate and community teams from Colorado, Iowa, Illinois, Kansas, Minnesota, Missouri, Nebraska, North Dakota, South Dakota and Wisconsin to compete on the Regional stage November 4-5, 2017.

“Madison is a great location for our teams,” exclaims US Quidditch Executive Director Sarah Woolsey. We’re excited to work with our partners to put on a great event!” Madison will host over 300 athletes, officials, volunteers, and fans at the quidditch tournament. Admission is free to the public. The top teams will qualify for the US Quidditch Cup 11, to be held in Round Rock, Texas April 14-15, 2018.

Quidditch is a full contact, competitive, mixed gender sport inspired by the Harry Potter series. It began in 2005 and has since spread to over 300 colleges, high schools and community teams nationwide. US Quidditch includes official club teams at traditional sports powerhouses like the University of Texas, University of Missouri, and University of Minnesota.

Teams compete over a year long season. USQ hosts eight regional championships that are part of the qualification process for teams attending the annual US Quidditch Cup. At these events, teams will compete in one of two newly created divisions: collegiate and community. Collegiate teams will compete only against other collegiate teams and community teams will compete only against other community teams. Quidditch is played with seven players to a team all mounted on brooms. They score points with the quaffle (a volleyball) and the snitch, a neutral yellow clad athlete who tries to avoid capture similar to flag football. US Quidditch’s official rulebook is available free for downloadhere.

US Quidditch (USQ), is a 501(c)(3) nonprofit organization and the national governing body for the sport of quidditch, organizes the Midwest Regional Championship. USQ advances the sport by organizing events and programs that build community and empower all genders to compete together. US Quidditch is not affiliated

About the Madison Area Sports Commission

The Madison Area Sports Commission (MASC) is the greater Madison area’s official sports marketing organization. Launched by the Greater Madison Convention & Visitors Bureau in 2010, MASC is charged with elevating the recognition and awareness of the impact of sports tourism on the regional economy while serving the unique needs of the sports tourism business. For more information about the organization, visit madisonsports.org.