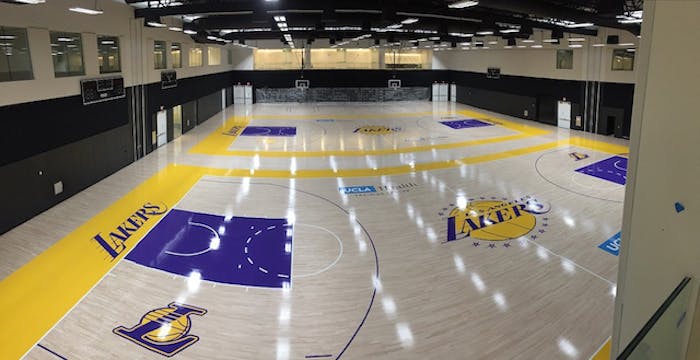 Cincinnati, OH – January 25, 2018 – As one of the winningest franchises in NBA history, the Los Angeles Lakers are nothing short of basketball icons. With 16 world championships under their belt, the Lakers are one of the most storied programs in the history of sports. And for decades Robbins Sports Surfaces has been with the Lakers every step of the way providing world-class flooring for the world-class team.

At the Staples Center, the Lakers play on a Robbins All-Star™ Plus flooring system. They also practiced on the Bio-Channel® Classic during their tenure at their previous training facility, the Toyota Sports Center. Now, the tradition continues as another top-quality Robbins Bio-Channel Classic was installed at the new state-of-the-art UCLA Health Training Center, which opened last summer just in time for the current season.

Because of the longstanding relationship between the Lakers, Robbins and Robbins dealer Pacific Floor Company, and because of the excellent quality workmanship and customer service they provide, there was no question the flooring at the new facility would be a Robbins floor installed by Pacific Floor. It was also because of those reasons that the new Lakers floor was chosen as a Sports Surface of the Year Finalist.

“When we decided to do this project we, of course, really didn’t go to anybody else,” explains Project Manager for the Lakers Joe Pica. “We’ve always had Robbins floors.”

The UCLA Health Training Center project was a massive undertaking, giving the Lakers, and NBA G League team the South Bay Lakers, their own home. The new facility also houses all Lakers operations in one facility. Previously, the team shared space with the LA Kings at the Toyota Sports Center. So, it was important to rely on someone they could trust – Robbins and Pacific Floor – for the flooring, a critical part of the project.

Pica said Lakers organization officials, aficionados of flooring, visited virtually every floor within a 100-mile radius to get ideas for their new facility. While there were newer models out there, the Lakers decided to stick with what worked for them for years – the Robbins Bio-Channel Classic.

“We met them at Loyola Marymount University because we wanted to show them the MVP,” says Robbins Western Regional Manager Jim Colla. “While they liked the MVP, the bottom line was, ‘We love this floor so much, we want to just keep the floor we have and put it in our new facility.’ And that’s what we did.”

Given the players are on the floor many hours each day, the flooring choices were heavily studied, Pica said, keeping multiple factors in mind, including performance, the feel of the floor, and athlete health and safety.

“It [the MVP] was an excellent floor. It was a great floor, but they just felt more comfortable with the floor that they had and they really wanted to stay with the softer floor. That’s why they stayed with the Bio-Channel,” Pica details. “It really came down to the training staff and everybody really feeling that that product worked best for the Lakers in the situation.”

Once the decision was made, the Robbins team got busy. In fact, Robbins had been hard at work for some time. Because the Lakers use only the clearest, first-grade maple, Robbins had been hand selecting the purest boards for the floor over a period of time.
Then, it was time to install the 23,400-square-foot floor featuring two and a half courts. Sales Manager and Estimator at Pacific Floor Company Mark Herthel said the installers worked hard to replicate the Lakers original Robbins floor.

“The unique method of the installation was installing the sleepers at 17 inches OC (on-center) in lieu of 16 inches,” Herthel explains. “We ran the three-quarter inch plywood subfloor diagonal to the sleepers in lieu of parallel direction. We also used Random Length Plus maple instead of the new XL, as it didn't exist when the earlier training center was built. We didn't want to deviate from what they had. It was a challenge to install at first, however, our crew caught on quickly and completed the project on time.”

Herthel said it was an honor to do work for the Lakers.

“It is certainly high profile being an NBA team, and one that’s been a champion over many years,” Herthel says. “The floor turned out flawless, beautiful, nice.”

And it’s not just the Lakers who love the floor.

“Actually everybody in the NBA has played on it,” Pica says. “One of the differences between the LA Lakers and any other team in the NBA is that most of the NBA players live in Los Angeles, so they have an open door policy here at the Lakers that the players can come over and use the facilities.”

On any given day NBA greats from across the league may grace that Robbins floor.

“Whether they’re members of the Lakers or not, everybody loves the floor and everybody enjoys it,” Pica adds.

Robbins Sports Surfaces, a division of Robbins, Inc., is a privately held, 4th generation family-owned flooring company based in Cincinnati, OH with sales offices across the U.S. and manufacturing plants in Michigan and Wisconsin.

The NBA champion Cleveland Cavaliers play on a Robbins Sports Surfaces “All Star” brand floor at their home court, Quicken Loans Arena, and practice on more than 18,000 sq. ft. of the company’s “Bio-Channel Classic” flooring, one of the top floor choices among NBA franchises. The Cavs have played home games on Robbins floors since 1974.

More NBA teams compete and train on Robbins flooring than all other competitors combined, with 90% of NBA teams owning the company’s competition and/or training facility floors. Past NCAA men’s basketball champions Connecticut, Duke, Kentucky, Indiana and North Carolina play their home games on a Robbins floor.

Robbins Inc. has registered 25 patents over the years, with additional patents pending, and is the only U.S. flooring manufacturer with a full-time research and product development staff. Robbins’ unique capability and understanding of the biomechanical interaction between the athlete or performer and floor have recently led to new designs that reduce vibration and increase uniformity, both of which improve performance, comfort and safety.

In addition to Robbins Sports Surfaces, Robbins, Inc. is also the owner of Stoehr Flooring, a high-end residential flooring business, and majority owner of Egis Floorlife, an innovative after-market service business. Robbins also has a theater and dance floor division known as Robbins Performing Arts, which is dedicated to the development of performing arts floor systems that enhance the safety and comfort of performers.