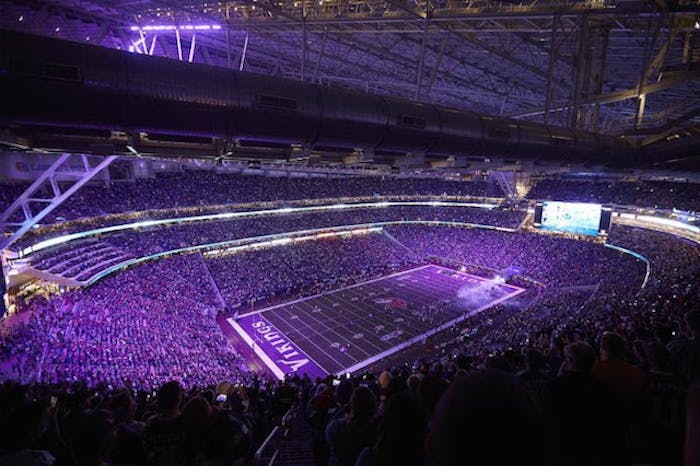 SYRACUSE, N.Y. ... Power management company Eaton today announced that the February 4 New England versus Philadelphia professional football championship game at U.S. Bank Stadium in Minneapolis will be the second professional football championship game to be illuminated by its Ephesus LED sports lighting and controls system. In 2015, New England defeated Seattle at University of Phoenix Stadium in Glendale, Arizona in the first "Big Game" to be lit by LED lighting. Featuring industry-leading control functions, the LED system enhances the viewing experience for spectators while reducing energy use by as much as 75 percent.

The game is the first of three consecutive professional football championship games to be illuminated by Eaton's Ephesus LED sports lighting. The "Big Game" in 2019 will be at Mercedes-Benz Stadium in Atlanta, while the 2020 game is slated for Hard Rock Stadium in Miami.

"Our success at University of Phoenix Stadium and the attention our LED lighting solution received for its performance during the world's biggest sporting event truly changed the perception of LED sports lighting from a rookie to a primetime performer," said Mike Lorenz, president, Eaton's Ephesus Lighting business. "At that time, just a handful of professional sports venues and only one football stadium had made the switch to LED lighting. Today, more than one-third of the four major professional sports venues and thousands of other facilities of all sizes employ an LED lighting solution."

The capabilities of Eaton's Ephesus LED sports lighting system allow building operators to completely darken the stadium, turn on lights with the flick of a switch and display colorful light shows that will enhance the pomp and circumstance surrounding the world's largest sporting event, including the player introductions, National Anthem and Justin Timberlake halftime show.

U.S. Bank Stadium, which opened in 2016, was the first new stadium constructed with LED sports lighting. It features a combination of Eaton's Ephesus Stadium and Arena Pro systems with color temperature tuning capabilities and Prism fixtures for full RGBA color lighting, controlled through DMX. During the past two seasons, football fans have enjoyed a myriad of entertaining light shows highlighted by Minnesota's signature color, purple.

Eaton's Ephesus light-emitting diode sports lighting product line provides optimal lighting that illuminates more uniformly on the playing surface and offers an improved stage for players and fans watching live and on high-definition television. The system is easy to install, requires little to no maintenance for years and offers the lowest total operating costs compared to other traditional sports lighting systems.

Eaton is a power management company with 2016 sales of $19.7 billion. We provide energy-efficient solutions that help our customers effectively manage electrical, hydraulic and mechanical power more efficiently, safely and sustainably. Eaton is dedicated to improving the quality of life and the environment through the use of power management technologies and services. Eaton has approximately 96,000 employees and sells products to customers in more than 175 countries. For more information, visit Eaton.com.

At POOLCORP, we believe everyone deserves the chance to swim, so we created A Splash of Joy™ to provide swimming lessons to children who otherwise might not have the opportunity to learn basic water safety skills. By the end of 2022, POOLCORP will have...
May 26, 2022