BOSTON – An MIT-developed technology is helping a growing number of players and coaches – including those in the NFL, NBA, NHL, MLB, MLS, and Power Five conferences – improve overall performance in the weight room and on the field.

Named Perch, the device uses a combination of cameras and machine learning to monitor movements during exercise and enhance an athlete’s motivation, safety and performance in the weight room – something that co-founder Jacob Rothman says fitness technology has to date failed to address.

“From professional athletes to casual gym users, improving and maintaining one’s fitness is an enduring challenge. For those who lift weights in particular, building muscle is dependent on performing the exercises correctly for any given number of repetitions,” adds Rothman. “Perch is fundamentally changing the way athletes lift by giving them immediate data regarding their quality of movement and keeping players and athletic programs progressing towards their goals.”

The idea for Perch came shortly after Rothman, a former MIT varsity athlete, herniated a disc in his back during a routine workout. While recovering from his injury, he started to brainstorm ideas for a device that could help athletes better quantify workouts in the weight room to prevent injury and improve overall performance. He teamed up with two other athletes on campus – Nate Rodman and Jordan Lucier – and they began spending entire nights building, designing and testing different prototypes in MIT’s machine shops.

So how does it work?

Hardly a foot long and a few inches wide, the Perch device is composed of a 3D camera and tablet that are effortlessly attached to any weight rack. An athlete walks up, logs in on the tablet and starts lifting. While the athlete lifts, the 3D camera tracks their movements and instantaneously displays important metrics such as sets, reps, velocity, and power output on the tablet. Athletes and coaches can then access the data via a web and mobile application after the workout. The data is also stored and saved to best monitor how to approach future workouts.

“What we’re doing is essentially making a weight rack smart,” says Rothman. “We aim to turn every athlete into the best version of themselves. We bring them information about the quality of their movement and what they can do to move more powerfully, efficiently and safely.”

In addition, the product's ease-of-install – roughly three minutes – makes it a prime candidate for mass adoption in gyms all across the U.S.

To date, Perch has installed hundreds of devices across the country, with some of the more prominent customers including the New York Giants, Tennessee Titans, Miami Dolphins, Orlando Magic, Philadelphia Phillies, Dallas Stars, San Jose Earthquakes, LSU Football and Kentucky Men’s Basketball, among many others.

"Perch has fit seamlessly into our training program. Their products are well designed, have a minimalist footprint, and are extremely user friendly. There is no question that Perch has raised the LSU standard of performance," says Tommy Moffitt, the strength and conditioning coach of LSU Football. LSU was the first athletic program - professional or collegiate - to use the technology and has since installed Perch units on each of the weight racks at the school's indoor football facility.

Having already addressed the needs of professional and collegiate athletes, Perch’s scope has also expanded to various military bases, fitness and performance facilities, and a growing number of high schools across the country. Looking ahead to the future, Rothman expects to expand the technology’s scope to commercial and home gyms.

“Runners never run without data from stopwatches and heart rate monitors to enhance performance. In 5-10 years, gym goers won't want to lift weights without Perch. Our goal is to have Perch units installed in every college and professional sports team facility, and every performance facility, fitness center, and home gym across the country,’ says Rothman.

Founded in 2017 by three former student athletes at MIT, Perch uses cameras and machine learning to monitor movements during exercise and enhance an athlete’s motivation, safety and performance in the weight room. Today, Perch has installed hundreds of devices across the country. Some of the more prominent customers include the New York Giants, Tennessee Titans, Miami Dolphins, Orlando Magic, Philadelphia Phillies, Dallas Stars, LSU Football and Kentucky Men’s Basketball, among many others. The company's scope has also expanded to various military bases, fitness and performance facilities, and a growing number of high schools across the country. For more information, visit www.perch.fit. 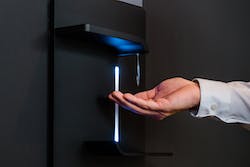